Sinema is betting on bipartisanship. Students aren't buying it

Many students have flushed their support for Sen. Kyrsten Sinema down the toilet due to her current congressional actions 'compromising her values'

Frustrated students represented in Congress by Arizona's Democratic Sen. Kyrsten Sinema don't plan to stop approaching her in public and demanding explanations on her policy positions any time soon.

Recently followed into a bathroom on ASU's Downtown Phoenix campus, approached on an airplane and confronted on social media by young voters intolerant to her moderate, bipartisan approach to crucial legislation, Sinema hails as a perfect example of what happens when politicians fall short on voter expectations, students said.

Claire Nelson, a sophomore studying sustainability, said Sinema's concern with bipartisanship, catering to Republicans, instead of Arizonans, was a defense mechanism the senator created while working in local politics and it should no longer apply to her politics.

"That pursuit of bipartisanship kind of started compromising her values," Nelson said. "So, now that she's in the Democratic majority, being bipartisan has been so ingrained in who she is, she no longer cares about doing the things that she said she would do."

Living United for Change in Arizona (LUCHA), an immigration advocacy organization, posted a video on Oct. 3 showing an activist following the senator out of her classroom and into a bathroom in the University Center.

After a bid to include immigration reform in Biden's Build Back Better bill failed, LUCHA announced the group would pressure Democrats to keep pushing for the reform to create a path to citizenship.

"Just how we got you elected, we can get you out of office if you don't support what you promised us," the person recording the video says.

In a statement from LUCHA, the group said it "is dedicated to improving the lives of everyone in our state and that's exactly what we want to see from the Senator. Sinema's constituents have not been granted access to her office, they have been ignored, dismissed, and antagonized." Requests for additional comments from LUCHA were not returned.

🔴BREAKING: Blanca, an AZ immigrant youth confronts @SenatorSinema inside her classroom, where she teaches @ ASU. "in 2010 both my grandparents got deported bc of SB1070...my grandfather passed away 2 wks ago & I wasn't able to go to Mexico bc there is no pathway to citizenship." pic.twitter.com/JDZYY2fOD2

One day after the bathroom confrontation, Sinema's office released a statement saying the event led to the senator's students' "safe and intellectually challenging environment" being breached. Sinema had previously met with the group that posted the video, her office said in the statement.

"Yesterday's behavior was not legitimate protest," the statement said. "It is unacceptable for activist organizations to instruct their members to jeopardize themselves by engaging in unlawful activities such as gaining entry to closed university buildings, disrupting learning environments, and filming students in a restroom."

According to state law, it is unlawful to photograph or videotape someone in a restroom, bathroom, locker room, bedroom or other locations with reasonable expectations of privacy without their consent.

In an emailed statement, ASU Police spokesperson Adam Wolfe said the department is "working with" Sinema's office in conducting an investigation that should be completed later in the week.

Clay Robinson, a junior studying innovation in society, civic and economic thought and leadership, and politics and the economy, who has campaigned for Republican candidates on all levels, said it's "incredibly frustrating" to campaign for someone, to believe in their mission and then to watch them fall short on those promises.

"No matter who it is, no matter how frustrated you are with them, I think a private space like the restroom is probably an inappropriate space to conduct that sort of protest," said Robinson, who is the incoming chairman for Arizona College Republicans.

POLITICO reported Wednesday grassroots activists and union groups were preparing to organize a series of demonstrations outside of Sinema's Phoenix and Tucson offices because they worry she could stall parts of President Biden's agenda.

With a John McCain legacy in the state, working across party lines to collaborate in order to pass legislation once worked. Students said the difference between the late senator and Sinema was McCain had a set of ideological beliefs that he had communicated.

Nelson said bipartisanship is typically a tactic used by those in the minority party to pass legislation and achieve other policy goals. But now that Sinema is in the majority party, or at least is on paper, "she could get the things that she wanted to fight for passed, but she's not doing that," Nelson said.

Other students said bipartisan can work, but in Sinema's case may be a cover. 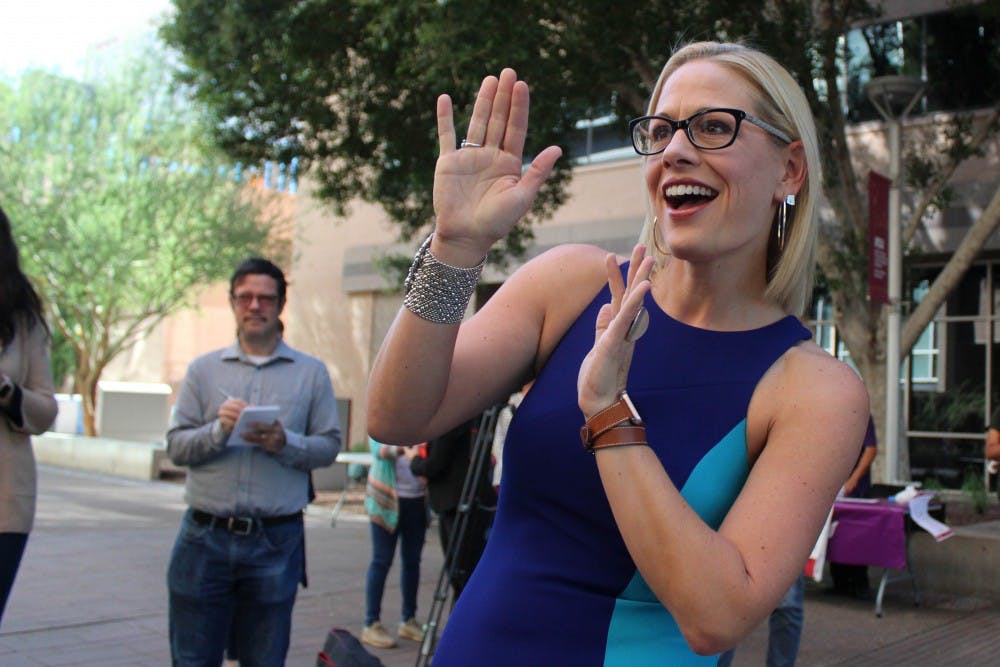 "I think it's refreshing to see that there's this sort of bipartisanship but, to be quite frank, I think she has bigger plans in store," Robinson said. "If she's maybe running for president one day, she's obviously moderating herself to give her a track record that will make her more palatable to the general American audience."

"It was awkward having to do an assignment for her after finding out that she voted against raising the minimum wage," Garcia said. While it was a strange adjustment to take a class taught by an elected official, there were moments where it felt normal, Garcia said.

Nelson, who has spent time trying to convince neighbors and other people she knew to vote for Sinema because of her social work background, said she's not only frustrated with the way the senator appears to be shifting on campaign promises, but also that she seems unreachable.

"What everyone really wants is just more communication on her part," Nelson said. "We want some type of channel, some type of dialogue. She speaks so much about having productive, almost respectful debate, but there seems to be no engagement on her part in that debate."

In an emailed statement, Sinema's press secretary Hannah Hurley said "Kyrsten and our office regularly meet with individuals and groups from across Arizona on a consistent basis. As she has said publicly, Kyrsten will continue meeting with Arizonans with diverse views to inform her work in the Senate."

Sinema has been teaching at the University for almost 20 years and is facilitating a class on grants and fundraising this semester. Outside of a classroom setting, Garcia, the student who took a class with the senator in the spring, said she's never made attempts to contact Sinema about issues that matter to her because "I already know she won't engage."

Garcia explained Sinema was educated, had a social work background and was not the typical candidate, but was still desirable to young voters in particular when she was elected, though something seems to have shifted.

"She doesn't really listen to the people she's representing. She's kind of doing her own thing, which is kind of insulting," Garcia said. "Everyone in their 20s saw her as this person that could change everything."