The ASU-based social justice organization Local to Global Justice celebrated its 20th anniversary in September, after the celebration was delayed a year due to the COVID-19 pandemic.

The organization is known for hosting an annual forum and festival which usually draws a few hundred Arizona-area activists, community organizers and academics.

While the annual event typically has a specific theme — recent years have focused on food justice, racial justice or climate justice — it typically features activists and advocates representing a broad range of issues.

"We're always a multi-issue organization," said Beth Blue Swadener, a founding member and professor of justice studies at ASU. "Always have been, always will be as far as I know."

Swadener said the organization hit its stride doing anti-war organizing in the aftermath of 9/11.

Luis Fernandez, another founding member and a current professor of criminology and criminal justice at NAU, said that after a somewhat politically dormant '80s and '90s, "there was a kind of fervor that was going around in terms of activism on campus."

"There was quite a mobilization of people," Fernandez said. "And of course it was not as popular at that particular point to say don't go into Iraq, don't go into Afghanistan."

These radical roots have given Local to Global Justice the freedom and precedent to engage in a broad range of political and social issues. At its core, however, the organization has always been focused on building community.

"There was a need for a group that wasn't only campus and wasn't only community," Swadener said. "We were able to bridge both."

Denisse Roca-Servat, an ASU graduate and previous organizer with Local to Global Justice, said the organization has always tried to bring people outside of academia into University discussions.

"The University is also considered a space that has privilege, as far as it is closed," Roca-Servat said. "We wanted to open that conversation and do more popular education that is on the ground. That is a language that everyone understands, that brings us together to be able to transform situations of injustice."

Roca-Servat worked with Local to Global Justice between the years of 2007 and 2012, serving as president of the organizing committee in 2009.

In 2009, Local to Global Justice organized a multi-coalition march on the Tempe campus featuring some quirky political commentary.

The parade featured a series of papier-mache puppets representing climate change, globalization and the wars in Iraq and Afghanistan, including caricatures of former President George W. Bush and former Vice President Dick Cheney.

"It was all very fun and it was like a charade, trying to make a parody of politics," Roca-Servat said.

She called the parade an "incredible manifestation of solidarity of another world that we wanted to live in." 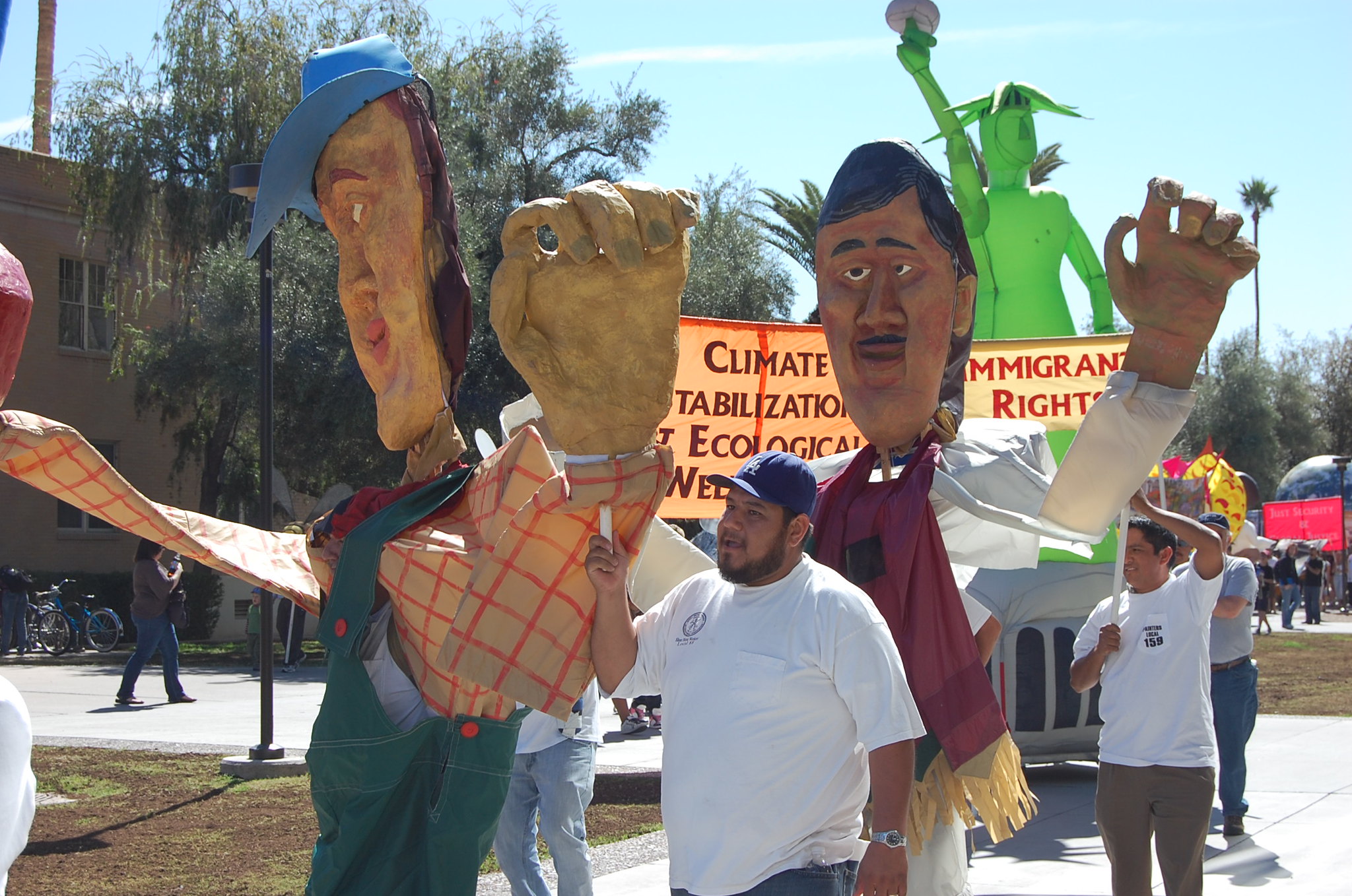 According to Flora Farago, a previous organizer and current associate professor at the Stephen F. Austin State University, the key to Local to Global Justice's longevity has been friendship and networking.

"The biggest impact we've had is community building," Farago said. "I found wonderful mentors and a system of support, both personally and professionally, in ways I couldn't have predicted."

Many former and current participants found their place in the world of academic activism during their time with Local to Global Justice. Others, such as Sen. Kyrsten Sinema, who was involved with the group during her time in graduate school at ASU, have found a place in politics.

Fernandez said the organization showed him how to do activist work within academic settings.

Roca-Servat said that she seeks to follow in the footsteps of Local to Global Justice and Swadener's work. At her current university in Colombia, she leads a team of students and researchers who do activist scholarship and are "committed to transforming the world."

Fernandez and Roca-Servat represent only two of the many activist academics who have taken skills and lessons from Local to Global Justice with them to other parts of the state and the globe.

"Local to Global is very much important today and will be 20 to 30 years from now," Farago said. "There will be new issues that arise — new types of injustice, as well as old ones that regurgitate themselves that we haven't resolved."

The 21st annual Local to Global Justice Forum and Festival will be held Feb. 24-25, according to Swadener.