Three members had multiple charges dropped, but the University's investigation determined two of them violated the 'interfering with University activities' policy

Two students involved in a viral confrontation in the multicultural center on ASU's Tempe campus have each been charged with an Arizona Board of Regents code of conduct violation, and another had all three of her charges dropped, documents provided to The State Press show.

A University investigation found Sarra Tekola and Mastaani Qureshi responsible for violating the "interfering with University activities" policy of the student code of conduct. The third student, Miriam Araya, was not found responsible for any violations.

All three students received notices of allegedly violating the interfering with University activities and harassment policies of the student code of conduct, but there was insufficient evidence to find any of them responsible for violating the latter policy. Tekola was also alleged to have failed to comply with University officials due to a social media post, but that charge was also dropped.

Tekola, Qureshi and Araya are ASU students and organizers of the Multicultural Solidarity Coalition, a student-run organization not affiliated with the University that has been advocating for the development of a multicultural space since 2015.

The three students first received letters from the Office of Student Rights and Responsibilities notifying them they had violated ABOR's student code of conduct on Sept. 30.

The notices followed a viral confrontation with two male students in the newly opened multicultural space on the Tempe campus. One of the two male students displayed a "police lives matter" sticker on his laptop and the other wore a "Didn't vote for Biden" shirt.

At least one of the male students, Chase Beckerman, did not receive a notice of code of conduct violations. The State Press could not confirm the other student's identity.

Due to Tekola and Qureshi's violations, the University gave both of them a warning and asked each of them to write a reflection on how to deal with a similar situation in the future and "facilitate a civil dialogue" about the purposes of a multicultural space. 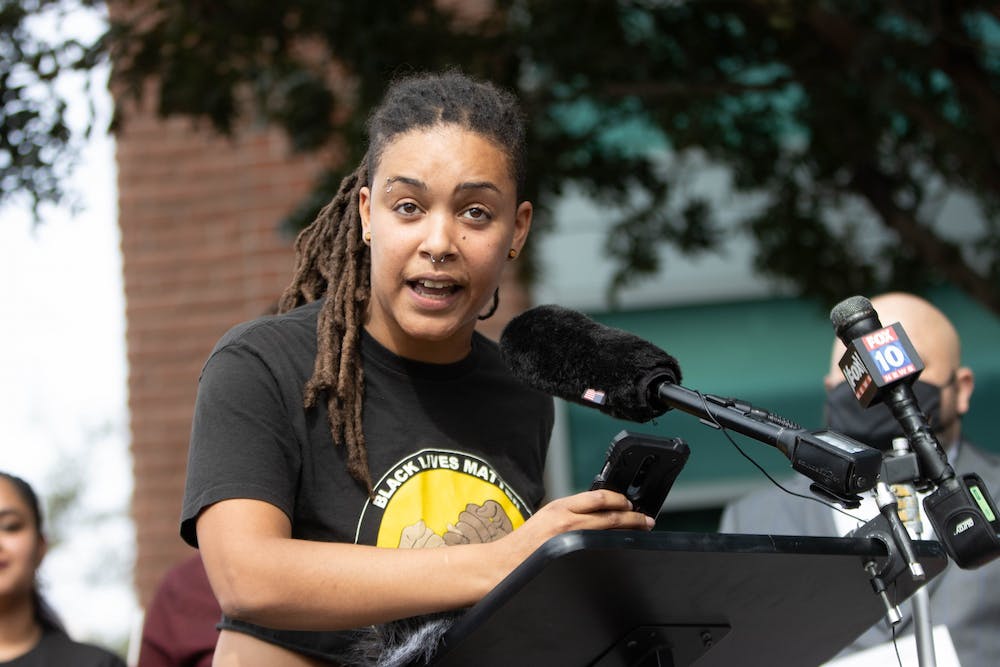 Sarra Tekola, one of the students who received charges from the University following a viral confrontation in the multicultural center, speaks to the press at the Fulton Center on Tuesday, Nov. 16, 2021.

ASU expects the students to submit their reflections by Dec. 15. In a press conference Tuesday, Qureshi said she would not submit a written statement to the University.

In the letters to Tekola and Qureshi, the University said "neither your expression of disagreement with that sticker’s message, nor that student’s choice to affix the sticker to his computer, were considered as possible violations of the Student Code of Conduct."

"However, the university expects that such dialogues will be both respectful toward other parties and mindful of the setting in which they occur," the letter from SRR said. "In this instance, the confrontation captured on video was not respectful dialogue, and its heated nature in an enclosed space where numerous other students were studying caused disruption to their activities as well as to the previously quiet study activities of the students who you confronted."

“Because of our pressure, the University got scared and rushed their decision to try and get ahead of the press conference by delivering a decision two hours before this conference, most likely in hopes that it would deter us from continuing to publicly call them out,” said Keisha Acton, co-minister of activism at Black Lives Matter Phoenix Metro.

According to a University statement provided by ASU spokesperson Chris Fiscus, the Dean of Students Office met with all of the involved students. The statement said ASU will not be commenting on discipline for the students.

In the press conference, Will Knight, an attorney at The People’s Law Firm who represents the three students, outlined five demands the students and the community want to see from the University.

They want to see ASU publicly condemn white supremacy, adequately staff the Multicultural Communities of Excellence space, post guidelines for the space that the MSC put together at ASU’s direction, transfer governance of the space to the MSC and clear Qureshi's and Tekola’s records of the code of conduct violations.

Among community members in support of the three students at the press conference were ASU faculty and staff members.

Rashad Shabazz, an associate professor in the School of Social Transformation, spoke as a faculty member expressing support of the students charged.

“Part of the reason that we are here today is because these students tried to do something that all people do," Shabazz said. "They tried to organize a space to give voice to their lived experience their values, their practices, their racial and gender lives."

Tekola, who founded the MSC in 2015, said they felt completely unsupported by the University.

"ASU refuses to protect students of color, and the world needs to know how they treat us here on this campus when we push to make it a better place for all," Tekola said.