ASU researchers tasked with analyzing the Phoenix Police Department's call data will determine who is best suited to respond to calls over the course of the next year with funding from part of the city's general fund set aside for police reforms.

By reviewing about 1.4 million calls from one year, the researchers will analyze what was said in calls and how officers responded. Recommendations will follow in increments, pointing the department to types of calls that may be better suited to be answered by mental health counselors, social workers or another alternative responder.

Funding for the research will not exceed $76,500, with an option to renew for another year.

"This audit is more about analyzing the type of calls that officers respond to and being smarter about the ways we deploy our resources," Justus said.

By directing calls to different resources, the department will be put at ease and callers can get the right help, said Heather Ross, a clinical associate professor in the School for the Future of Innovation in Society and the Edson College of Nursing and Health Innovation, who is assisting in the research.

"What we're really hoping is that the academic eye is going to be able to look at these calls and say, 'Hey, listen, if a call like this comes in, it's best to transfer it to this entity instead,'" Justus said.

Leading the research is Michael Scott, a clinical professor in ASU's School of Criminology and Criminal Justice in the Watts College of Public Service and Community Solutions and director of the Center for Problem-Oriented Policing, who has been working as a liaison between the University and Phoenix PD since 2019.

"The police respond to literally hundreds of different types of requests for police service," Scott said. "Each one of them is going to take some kind of customized thinking as to what should the police be doing? What might others be able to do? Either instead of the police or in collaboration with the police. And all of it's really intended to make the most effective and efficient use of limited police resources to provide the public with the best possible service that the city can provide."

Ross, who has years of medical experience, is focused on the mental health resource aspect of the project. 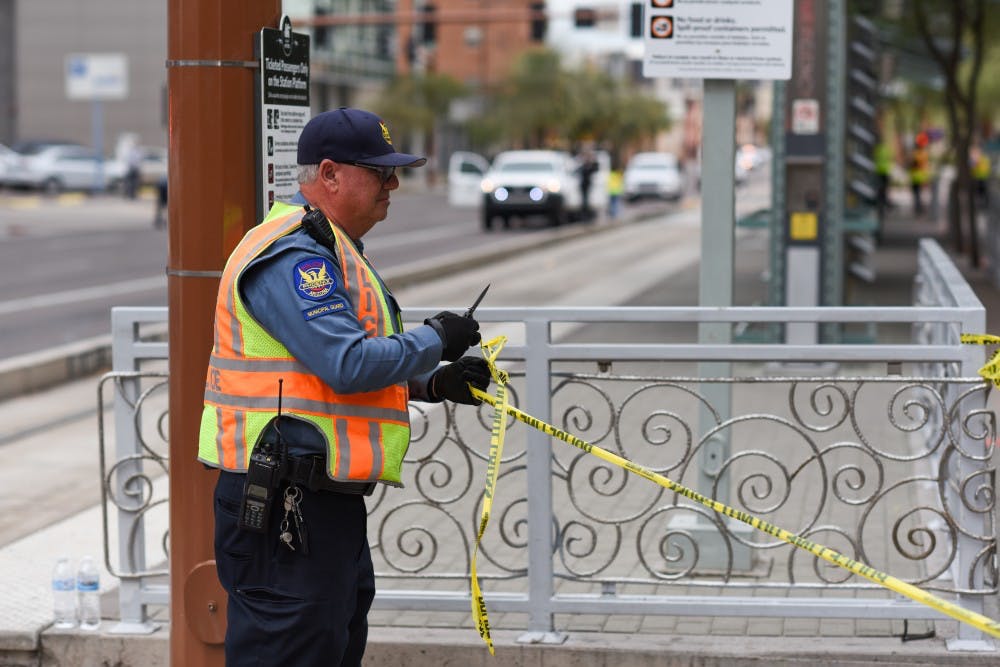 A Phoenix Police Department member cleans up an investigation scene after the light rail struck a man in Phoenix on Wednesday, Feb. 13, 2019.

Scott, who has worked with police departments in cities in Florida and Missouri, said rather than modeling the research or recommendations after what a particular city is doing, the team will look at published reports from multiple places, use prior knowledge from policing and look to other internal audits and data analysis the department has done.

"This ought to be a fairly routine kind of assessment that police departments do maybe every decade or so," Scott said. "It's a big undertaking to do it, but it's necessary because sometimes there are new problems that arise in society that demand police attention."

Scott said the timing of recommendation delivery is an important aspect of the project. The team will look first to the categories with the most calls to determine how to make the most change.

Kevin Robinson, an instructor in the School of Criminology and Criminal Justice who worked at Phoenix PD from 1980 until 2017 and was appointed to the Arizona Peace Officers Standards and Training Board earlier this year, said his academic and professional backgrounds blend directly into his work on the project.

"Everything going on around the country involving policing has a tendency to have a very broad brush and so it impacts police departments everywhere," Robinson said.

Earlier in the month, Phoenix PD's Executive Assistant Chief Michael Kurtenbach said during a Phoenix Public Safety and Justice subcommittee meeting that the department had 51 fewer patrol staff than the nearly 1,100 considered to be minimum staffing.

Kurtenbach said 212 officers had left in 2021 and 254 were expected to leave throughout the remainder of the year.

"Everything we learned in the city of Phoenix can get disseminated to other large and small cities," Ross said. "Everything, every opportunity, we have to learn and pay it forward. I think if it has the potential to help one person be safer and healthier, great, that makes it worth it at the end of the day."