Review of past Council of Presidents' priorities show overlaps, shortcomings

A State Press review of the Council of Presidents' priorities from 2018 until 2021 revealed successful initiatives but showed how measures have fallen short due to a combination of lofty goals and University inaction.

The Council of Presidents releases a list of priorities and action items at the beginning of each academic year to guide Undergraduate Student Government and the Graduate and Professional Student Association in both advocacy as well as policy. According to USG Tempe's advisor, Elizabeth Rosenkrantz, drafting these priorities involves input from various areas of the University.

"The priorities are drafted by the four USG Presidents and GPSA President throughout the summer," Rosenkrantz said in an email. "They gain insight and feedback from constituents to help shape the priorities."

Most year's priorities feature five pillars, or focus areas. While they all have differences and address issues most pressing during the academic year in which they were created, there are initiatives which have continued over multiple years.

Diversity, equity and inclusion, or some iteration of the phrase, has been a pillar on each priority document since 2018.

Below a listed pillar, each council lists various initiatives the presidents would prioritize in order to make ASU more inclusive. For example, one of the 2021-22 council's goals was to collect and disseminate data on the diversity of staff, students and faculty.

Councils in recent years have repeatedly proposed — and initiated — safety walks, free menstrual products and the establishment of the Multicultural Student Center.

Civic engagement, transparency or communication and food insecurity have also been recurring priorities, with each new Council of Presidents putting their own spin on initiatives. But the presidents' power is limited, and University administration still has to give the final OK on plans. 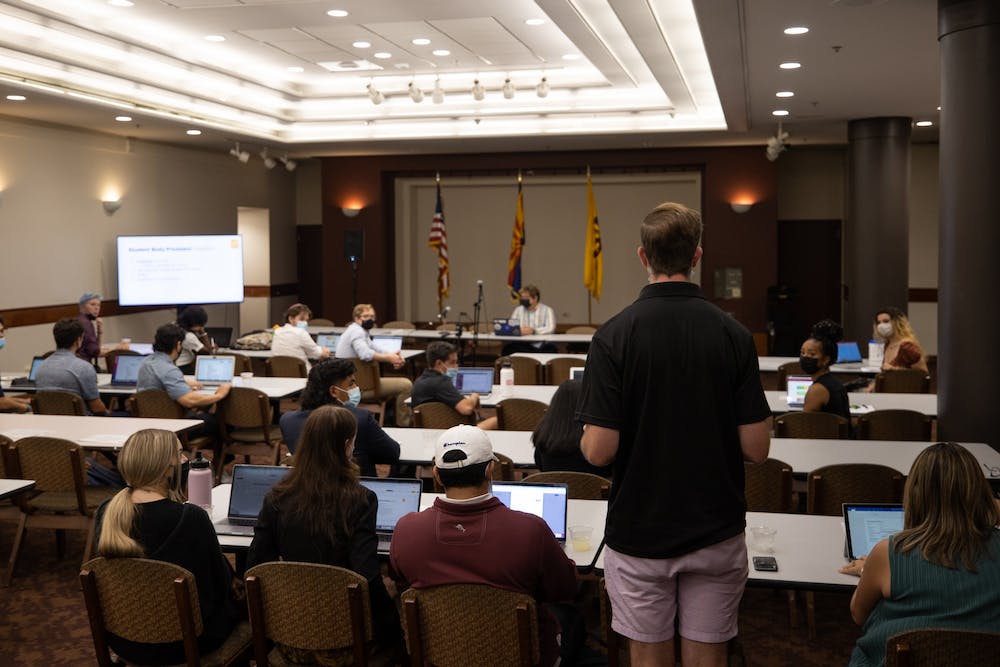 To get the University's attention on an initiative, USG and GPSA presidents typically present plans during regular meetings with ASU administration. The presidents can inform administrators of either their own goals or initiatives, or the legislation passed by their campus' senate.

According to former USGT president Jacqueline Palmer, who served from 2020-21, it can also be difficult for priorities passed through legislation to be implemented by the University.

"Legislation is a formal request by the senators to represent their students and it is up to (the) administration on what they decide to do with these requests," Palmer said.

Palmer said the Council of Presidents isn't involved much in the legislation passed by their campuses, and they only notify the administration and assist with any specific tasks designated to them by the bill.

The president can serve as a liaison for USG and the student body by advocating for certain initiatives, but at the end of the day, it's up to University officials and department heads to approve and implement those ideas.

Izaac Mansfield, the USGT senator for the School for the Future of Innovation in Society, said the council can keep pressure on the administration regarding senate initiatives or resolutions USG wants to get accomplished because they have more frequent access to University officials.

"For the student body president, for President (John) Hopkins this year, President Palmer last year, they're able to keep the conversation going if it seems like it's starting to fizzle out," said Mansfield, a junior studying innovation in society and computer systems.

The University has chosen not to implement legislation passed by USG Senates in the past, hindering action items created by the council's priorities.

In 2019, USGT passed a resolution calling on the University to adopt a medical amnesty policy, which would have allowed students to call for medical assistance in a situation involving drugs or alcohol without having to worry about facing consequences for drug use or underage drinking.

At the time, the administration expressed its desire to remove barriers for students seeking medical assistance in such a situation, but despite USGD also passing the resolution in 2020, a medical amnesty policy was never implemented.

"When it comes to resolutions, it's asking the University, asking the administration to do something, and if they choose not to respect that ask, even though it's coming from a body that's supposed to represent its undergraduate population, then there's not a whole lot more that we can do as students, other than to ask again," Mansfield said.

In June 2020, USGT unanimously passed a resolution asking the University to give all of its federal COVID-19 relief funds, $63.5 million, to students in the form of "direct cash grants." Two weeks later, ASU announced it would give half its funds, $31.7 million, to students, which was the floor set by the U.S. Department of Education as the minimum amount of funds required to go to students.

In past forums with ASU President Michael Crow hosted by the Associated Students of ASU, questions submitted by students asked by USG presidents have brought forward student concerns about sexual assault and mental health resources. Questions for the past two forums have remained relatively similar as have Crow's responses which have indicated slow progress on improving sexual assault and mental health resources.

The issue of food insecurity was raised in the 2019-20 priorities and has been a pillar ever since. The 2019 priorities only looked to explore ways to mitigate food insecurity, while the following year's council attempted to provide solutions.

In 2020, the council looked into reconfiguring Pitchfork Pantry, ASU's student-run food pantry, into a virtual pantry during the height of the COVID-19 pandemic. The University Senate, which consists of faculty and is separate from the Council of Presidents, also passed a resolution in March looking to expand the pantry.

But those goals never came to fruition, and now the Pitchfork Pantry has lost physical spaces on the West and Polytechnic campuses and has discontinued services at tutoring centers.

Nargish Patwoary, a graduate student studying biology and the director of Pitchfork Pantry on the West campus, said coordination and communication between USG and Pitchfork Pantry needs improvement.

"We're hearing of all these initiatives going on, but we're never really brought to the table to work on it with them," Patwoary said. "So you have all these moving parts, but none of (them) are connected."

Patwoary said members of Pitchfork Pantry are often left out of legislation passed by USG and GPSA relating to food insecurity and are usually notified about them after the fact.

The 2021-22 priorities include a goal to address food insecurity, but makes no direct mention of working with Pitchfork Pantry, instead just listing the group as a "Strategic University Partner." Instead, it proposes working with Aramark, the University's food service provider, to give meal swipes in dining halls to students who may be food insecure. 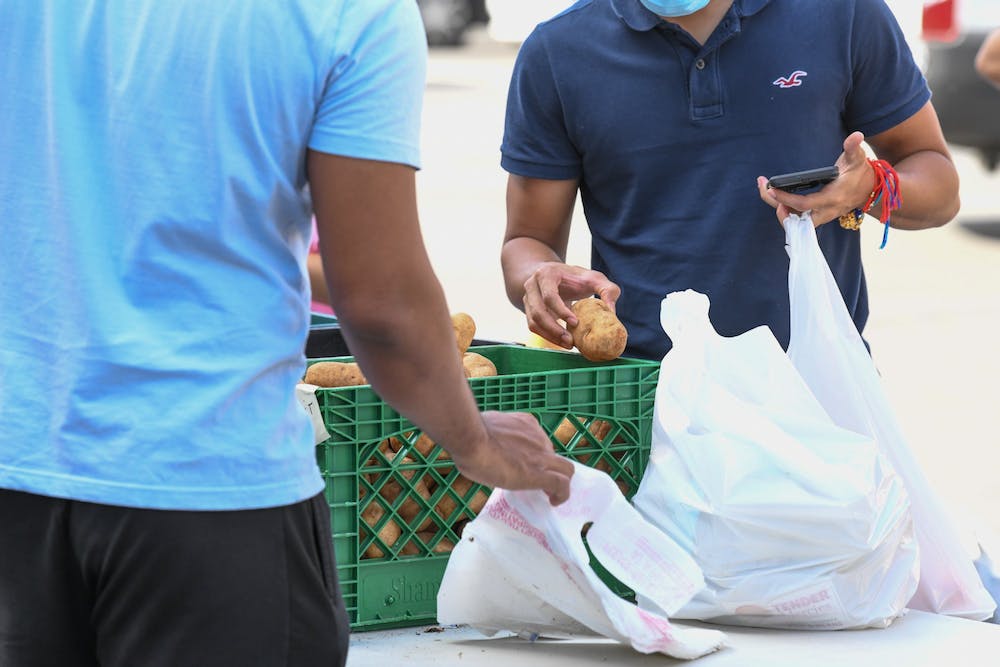 People place potatoes into shopping bags as they move about the Pitchfork Pantry event.

A lack of enthusiasm from admin and the student body

Since 2018, the council has attempted to address civic engagement initiatives, including increasing voter turnout in USG elections and removing barriers to voting in local, state and federal elections.

None of these initiatives were implemented by the University, but the University Senate passed a resolution to encourage faculty to consider Election Day when assigning work.

The 2018-19 priorities aimed to increase voter turnout in student government elections across all four campuses and among graduate students by improving public relations strategies and mobilizing senators. Only 7% of the student body voted in Associated Students of ASU elections that year.

Benjamin Branaman, a sophomore studying business data analytics and the president for New Voters at ASU, said he'd like to see USG advocating for civic engagement year-round, not just during election season.

"It's good that it has been in their priorities the last few years, but I think the important part is making it more of a culture of being civically engaged and not something that just pops up when it's civic engagement week, and then it goes away again for another year," Branaman said.

However, it can be hard to measure exactly what the council has accomplished in a year, as there's no formal review of the priorities. The 2018-19 priorities mentioned creating an end-of-year report and a website dedicated to the Council of Presidents, but neither were brought to fruition.

Where initiatives prevailed, and where disconnect remains

In 2019, USGT helped enact the menstrual equity project started by Planned Parenthood Generation Action at ASU in 2018. Menstrual equity was an initiative in the 2019-20 priorities, and by October 2019, free menstrual products had been placed in popular bathrooms across all four campuses.

Another priority for the 2019-20 council was increasing access to the Associated Students of ASU, the organization overseeing all branches of student government. A link to the ASASU website was added to MyASU in 2019 and is still there.

From 2020 to 2021, some of the goals presidents laid out made substantial progress, with partial credit given to USG and most to the consistent effort from student advocacy groups. As a result, a working group to establish a multicultural center was created and the housing portal merged the gender inclusive housing application.

Multicultural spaces were designated on all four metro Phoenix campuses in 2021, but organizers say there's still work to be done.

The student groups who have been advocating for multicultural spaces for years said the Council of Presidents' involvement is not necessary because the groups have different priorities. There has been little to no communication between the council and the Council of Coalitions, including the Multicultural Solidarity Coalition.

"If USG was able to take part in those kinds of statements that we are making or show more outward support for those things, (it) would just make us feel like we have the student leaders' support," they said.

Eigo, a junior studying women and gender studies, said it's clear USG leaders are listening to students' concerns, but they could be doing more to support the efforts of cultural coalitions at ASU.

"I want to see more specific policies or things they are focusing on instead of just using these buzzwords like diversity and inclusion all the time in their platforms," they said.