6,000 miles and a dream: The story of ASU water polo player Vanda Baksa

The journey to the United States wasn't an easy one for Baksa, but in just a month at ASU, she has already started to make an impact

Over 6,000 miles away from her home in Hungary, freshman water polo player Vanda Baksa left her dorm to go explore the ASU campus to find out where her classes were.

She spoke little English, had little to no experience in the U.S., and knew only a couple of people. The 2022 NCAA season was starting in three weeks, so Baksa didn't have much time before her life as a student-athlete began.

"I knew my dream was to become a water polo player. I want to be on the national team and be in the Olympic games," Baksa said.

Baksa moved to Arizona from the suburbs in Budapest, where she started playing water polo 10 years ago. She played on a small team after her father recommended she try it out because she was left-handed. Baksa joined a team close to home, where she grew up and fell in love with the sport.

In pursuit of her dream, Vanda joined one of the top water polo clubs in Europe, UVSE, in 2017. While she was there, water polo became her obsession. She won the Hungarian Championship, Hungarian Cup, and competed in the Euroleague for water polo. 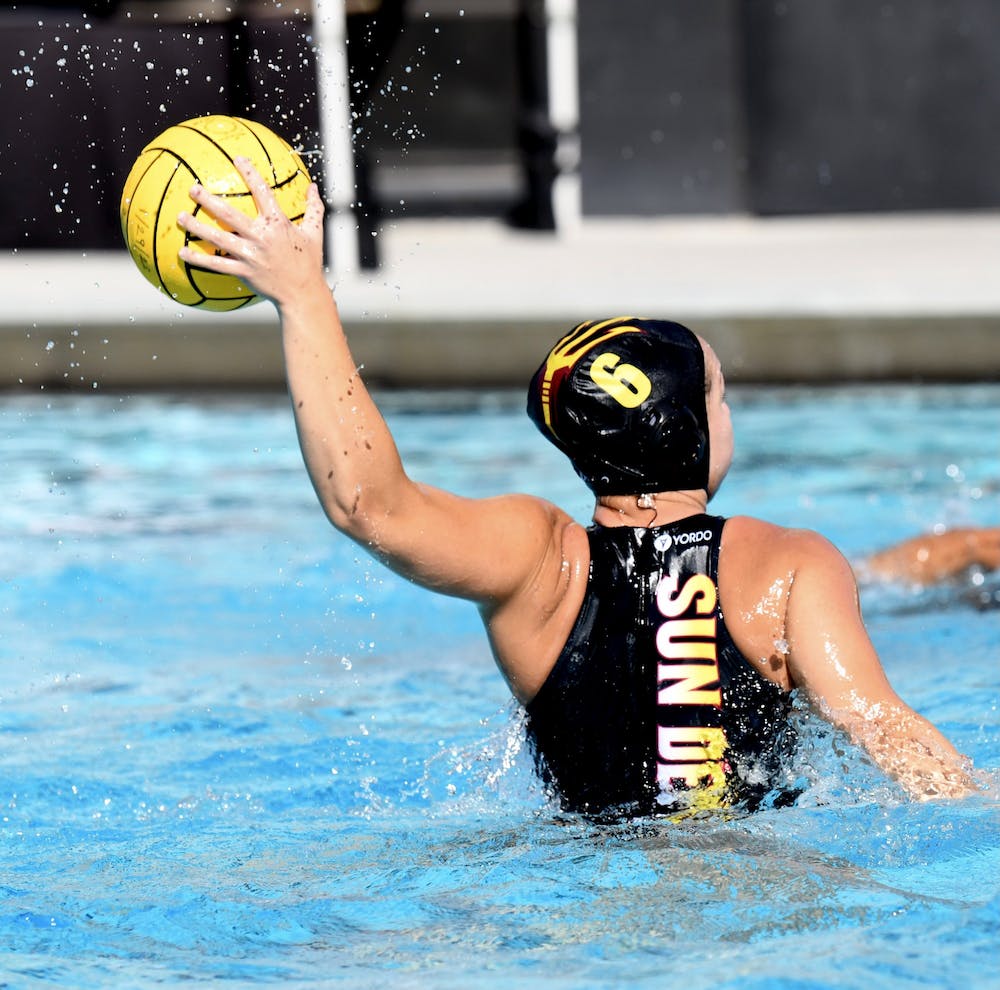 Junior defender Lara Kiss played with Baksa along with many members of the Hungarian national team. It's safe to say the bar was set high for them while on UVSE and junior national teams.

"You had to constantly prove yourself while also having to learn every day," Kiss said. "The intensity is so high over there."

For Baksa, she dove straight into UVSE and picked it up quickly, but not without help from Hungarian national team captain Rita Keszthelyi.

"She taught me a lot about water polo and about life in general," Baksa said. "She motivated me every day to go to practice and be better."

As her skills improved through practice and playing, Baksa studied water polo outside the pool as well. She would watch women's and men's matches as well to get new ideas and new ways to think in and around the game.

"She's one of the smartest left-handed players I've ever played with," Kiss said. "She always knows where the ball is going and knows what to do in most situations. Once you get a connection with her, it just goes so good."

In her 2020 season with UVSE, she scored 27 goals and accumulated 20 steals over the course of 20 games, winning the Tibor Benedek prize. The award was hand-picked by Benedek, who played for the men's Hungarian national team, but died before he could give award it to Baksa for her hard work and development over the year.

Baksa's career at UVSE landed her on ASU assistant coach Petra Pardi's radar and told head coach Todd Clapper, who only got to see her over livestream due to COVID-19 restrictions. Eventually, they reached out to Baksa and offered her a spot on the Sun Devil women's team. She studied English in grade school but wasn't fluent. However, she saw the advantages of coming to the U.S. to play.

It's been a month since she arrived in early January to join the ASU team and began her studies in sports business following the 2021 Junior World Championships. Baksa has been adjusting quickly to not only the new culture but also the new type of play. In Europe, water polo is more physical and rough than the way it is played in the U.S. There is also a shorter shot clock throughout the games.

"We can play harder in Europe than we can here," Baksa said. "In almost every match I had at least two exclusions because I have trouble finding a way to not play that hard."

Outside the exclusions, Baksa hasn't missed a beat in the first two weekends of games. Through six matchups, she has 13 goals, 13 assists and started all six games.

Outside the pool, it's been even more of an adjustment. In the first couple of weeks, Baksa needed help translating in her classes and struggled to balance assignments and exams with her water polo schedule.

Throughout her adjustment, Clapper and her teammates have been there for whatever she needs. They would check on her daily in the beginning as she settled in.

"It's a tough transition," Clapper said. "Knowing that, everybody really just wants to be warm and supportive and reaching out to help."

While experiencing life as a college student, Baksa won't lose sight of why she came here. ASU has started the season off slow through the first few weekends despite Baksa's stellar play, losing four of the team's first six games. For her, the goal is to improve herself and her team while she is here and continue to strive towards her dream of being in the Olympics.

"Sometimes she doesn't know how good she is," Kiss said. "She's such a hard worker and can do whatever she wants in water polo. For her, the sky is the limit."