After a year of online performances due to COVID-19 restrictions, students gathered for the first time in person to present and perform in "The Color Cabaret," an annual cabaret presented by the Music Theatre and Opera Student Organization.

The cabaret, held Jan. 29 and 30, was made up entirely of students of color, and the songs performed told a story with heart, grace and a cultural flair representing the diverse community at ASU. The performance also served as a fundraiser for a BIPOC student scholarship fund with the proceeds going towards the scholarship fund.

The show was put together behind the scenes by stage manager Maxwell Plata, a senior studying theatre, and his technical crew. Plata said this year's cabaret was something special, especially considering its ability to be performed live and in-person.

"It started in the lobby of Tempe Center for the Arts and last year with COVID it was outdoors and just filmed," Plata said. "This year we had the opportunity to make it actually a show."

Plata said the actors rehearsed for about a week before performing for the public, and that the performance was filmed by their videographer, Cassady Alberico, for ASU archives as well as to bolster the performers' reels. 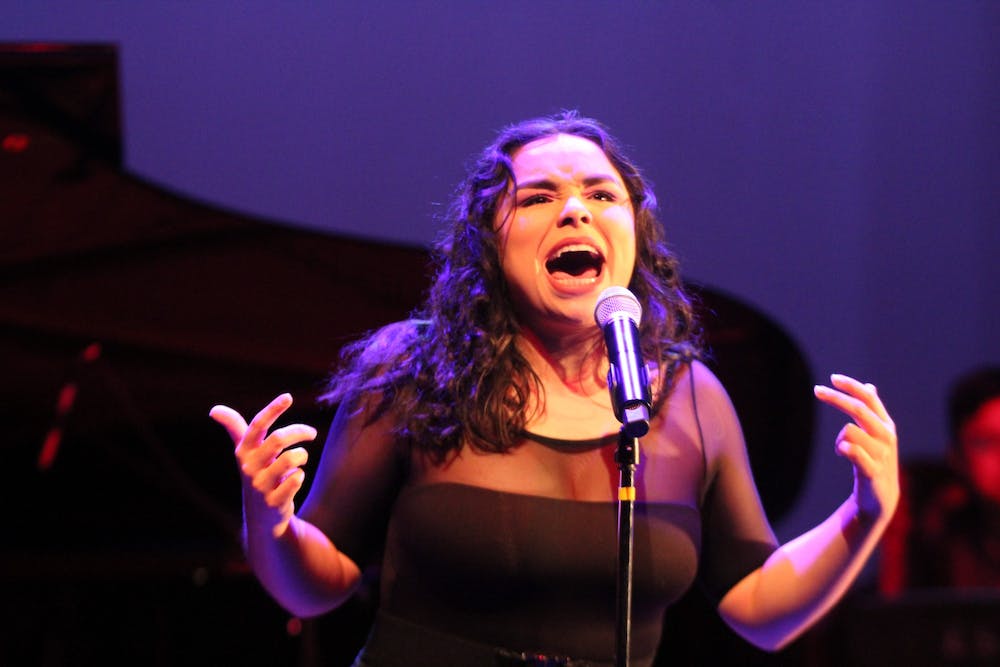 Lina Forero sang “You and I” by Lady Gaga during her performance at Evelyn Smith Music Theatre on Saturday, Jan. 29, 2022.

Bernard and Bost shared the stage with Karley Purnell in the opening act, "Salty Teardrops," from "Caroline, or Change," a musical focusing on an African American maid who works for a white family in 1963.

The show is imbued with blues, folk and other music genres to tell the story of the central character, Caroline.

"It was a really wholesome experience to share the stage with people of color," Bost said. "That never really happens in this capacity, it was just a great feeling and was very comforting."

Many of the works put on display throughout the cabaret focused on similar ideas of racial justice and Black history throughout America.

Mia Johnson, a junior studying music learning and teaching, performed her rendition of "The Talk," a poem by Samnae Brown discussing racially charged police interactions. The poem focuses on "the talk," which Johnson said her parents and many other Black parents have had with their kids.

"My mom helped me find that poem, it's a talk that my parents had with me and my siblings when we were younger," Johnson said.

"The Talk" focuses on a mother talking to her children about what to do when stopped by police. She mentions staying calm and collected to avoid any sort of racially-charged police brutality.

Johnson explained how she hopes "the talk" won't have to be so prominent in the future.

The diverse cast joined together on-stage throughout the performance, sitting around each performer, celebrating and encouraging them as they shared their pieces.

Andrew Chen, a first year master's student studying collaborative piano, who played the performers' accompaniments throughout the night, described the event as "a wonderful, wonderful experience."

Mario Yniguez, musical director for the show and a first year master's student studying conducting, closed the show by emphasizing the importance of telling the actors' stories. He gave credence to the actors who he said came already prepared for their performances.

"I ultimately ended up facilitating more than I did kind of directing because everybody came in with their music that they wanted to sing already," Yniguez said. "We ended up just kind of shepherding and curating the night to make sure we got something really special."