Over 200 walkers participated in a fundraising walk this past Saturday to help change the narrative around mental health and suicide.

Active Minds at ASU and Devils 4 Devils led the "Out of the Darkness" campus walk, a nationwide event originally created by the American Foundation for Suicide Prevention in 2010, with the goal of decreasing stigma around mental wellbeing.

Active Minds, a student-led organization with the goal to spread awareness covering the different types of mental wellbeing, paired with two other student groups and Devils 4 Devils, the University's organization for centralized student support, to put on the walk.

ASU organizations have been participants in the national campus walk in past years, but 2022 was the first walk after a multiple-year hiatus.

The event took place at the Sun Devil Fitness Complex West Field at the Tempe campus and raised over $7,000 for AFSP.

Emily Hinsberger, president of Devils 4 Devils and a senior studying psychology, said it's about building community resources and "making sure that those conversations are being had, because they are pretty difficult to have," she said.

The biggest message for the campus walk, Hinsberger said, was to show students with mental health issues that there will always be a safe place at ASU and also honor those who have lost a loved one due to suicide.

"Our main goal, just overall — whether or not we fundraised — was to bring something to the school and to the campus for the students to feel that there is a community that wants to support them," Hinsberger said.

After the walk, attendees were encouraged to dine at McAlister's Deli, where 15% of all proceeds went toward ASFP, which helps fund future research and projects around suicide.

ASFP and ASU fell just underneath the fundraising goal of $10,000 at $7,731, but may make up those dollars after McAlister's Deli tallies the contributions for the fundraiser. 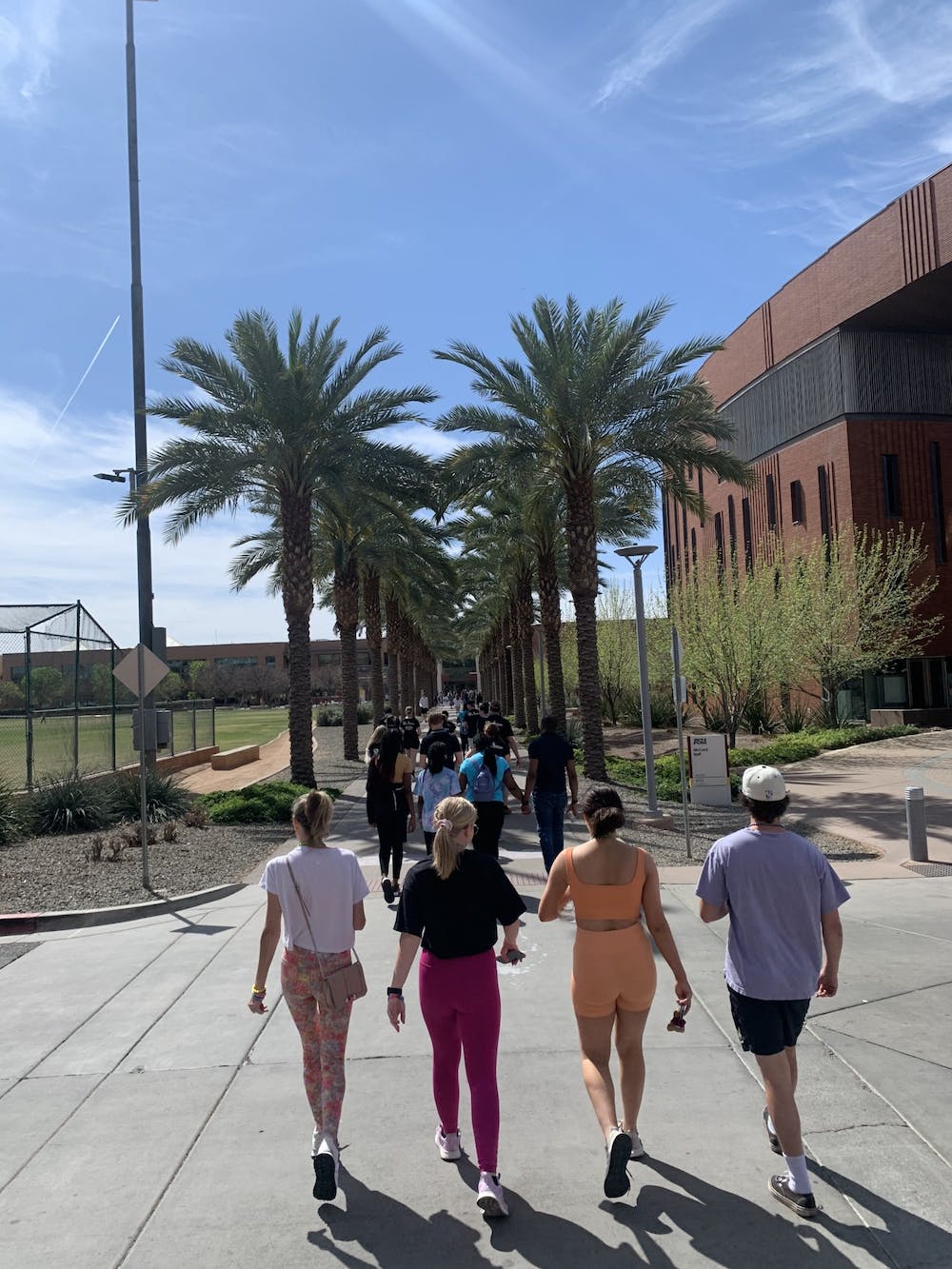 Students march down Palm Walk in support of mental health awareness on Saturday, March 19, 2022, during the "Out of the Darkness" walk.

"We can't let another day go by without showing that mental health is just as real as physical health," said Cori Reese, AFSP's area director for Arizona and New Mexico, during her opening statement at the walk.

Parker Faries, head of publicity for the walk's committee, said working on this event has given him a chance to advocate for a topic he has a strong belief in.

"It has been very fulfilling for me," said Faries, and a junior studying civic and economic thought and leadership as well as economics. "I've been able to take an issue I was passionate about and put some energy into it to try to see this event become something successful."

ASU has been criticized in the past for not doing enough for students' mental health, citing month-long wait times for counseling services and a jam-packed COVID-19 year with few breaks. Faries said ASU's involvement in the walk is a good step toward making a positive change for students who feel left behind.

Carter Bower, head of the fundraising committee for the walk and vice president of Devils 4 Devils, said that the walk will help make suicide acceptable to talk about. He said when more people become comfortable with speaking out and sharing their struggles, the more people will feel at ease with reaching out.

"It's OK to talk about suicide, in fact, it's even encouraged," said Bower, a junior studying psychology and neuroscience.

With students battling school, sports and other activities this walk was organized to bring a voice to the student community. "Some of the things I've seen, and I've noticed, is that students really just at the end of the day want to be heard," Hinsberger said.