Zen Shuttles is a new service on ASU's Tempe campus that can drive up to 5 students across campus for $1.99 per passenger

Students walk, bike, skateboard and drive to get around campus, but a new student-run business is offering an alternative form of transportation. As of Monday, there's a new option: Zen Shuttles, a "ride-pooling" service for ASU students and staff on the Tempe campus.

Zen Shuttles is offering Sun Devils electric golf cart rides across campus, like a University version of Lyft or Uber, and promises to do so at a lower price than other transportation services.

The business has three electric golf carts that can hold up to five passengers each. Although the golf carts will not go on the main walkways, they can take passengers on the streets in and around the Tempe campus.

To book a ride, students can use the Zen Shuttles app, currently available only on iOS devices, by entering their current location and desired destination.

Antoine Mistico, founder of Zen Shuttles and a junior majoring in technological entrepreneurship and management who got funding for the business through Venture Devils, said Zen Shuttles was created to help students who struggle to get between classes on time.

"I think one of the biggest things was giving back students their time," Mistico said. "Just speaking to a lot of students and myself personally, a lot of students have to kind of create these gaps in between classes so that they can get from class to class."

Dylan Bernaud, a freshman studying kinesiology, said he takes around 10 to 15 minutes to get to class by walking. Although he does not run late to class, Bernaud said services like Zen Shuttles will help him get around, and that he would pay around $5 to use it.

Unlike the ridesharing services Uber and Lyft that calculate the cost of a ride by distance and duration, Zen Shuttles charges rides at a flat rate of $1.99 per person, meaning five students traveling together could get a ride from one end of campus to the other for around $10. Zen Shuttles also has a weekly $9.99 subscription for unlimited rides on weekdays called Peace Pass.

Besides ridesharing services, students have other options to travel around the Tempe campus, like the Valley Metro lines. However, Mistico said Zen Shuttles is a more efficient alternative.

Valley Metro lines such as Orbit and FLASH are free, but these lines go to designated stops. Zen Shuttles' golf carts go down streets that Valley Metro's buses do not, letting students get closer to some of their destinations, Mistico said.

"The FLASH and Orbit are great alternatives and those are something that are free, (but) we think we are a little more efficient than them because we're taking students directly to where they're headed to," Mistico said. 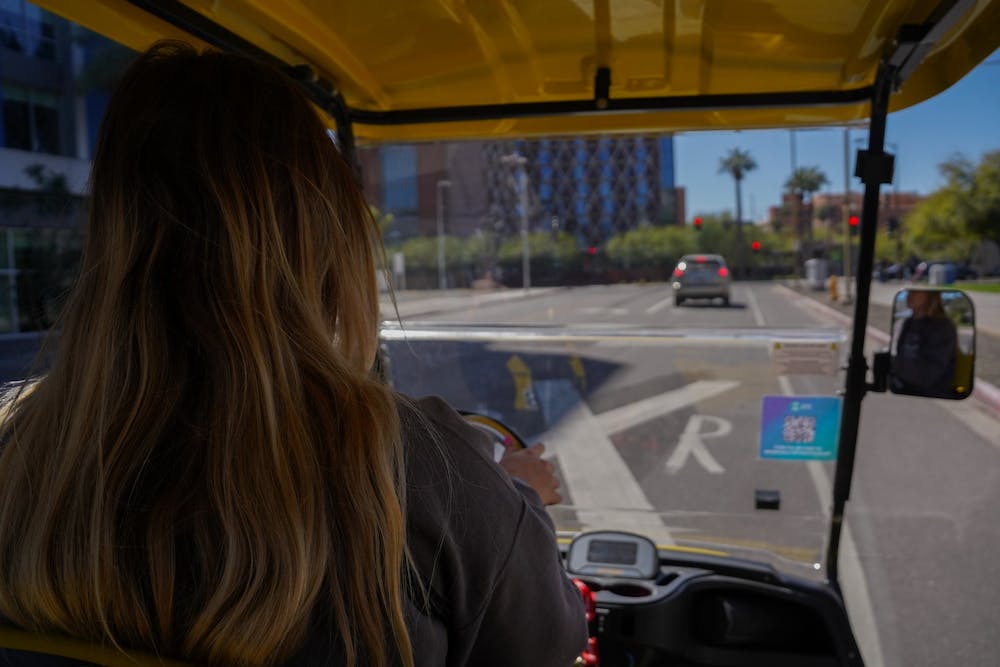 Freshman Madison Mayginnes drives one of the Zen Shuttles on Veterans Way in Tempe on Monday, March 14, 2022.

For their opening week, Zen Shuttles drivers are offering free rides to students who they see walking on campus — however, if you book a ride through the app, you will be charged the $1.99 fee.

Some of Zen Shuttles' drivers are ASU students, like Madison Mayginnes, a freshman studying sports business, who said she gave a teacher a ride to help her get to class on time.

"Someone actually I picked up was a teacher, and she was like, 'I'm gonna tell my students about this so they're not late to class,'" Mayginnes said. "I just think that's awesome because once you tell someone, they'll tell someone else, and word spreads."

Mistico said Zen Shuttles is looking to hire more ASU students. Starting pay is $15 an hour, and students can apply by emailing contact@zenshuttles.com.

Because this is its launch week, Mistico said that Zen Shuttles is testing what times it will operate. Depending on consumer demand, Zen Shuttles will operate on weekdays from 8 a.m. to 7 p.m., or 11 a.m. to 4 p.m., according to Mistico.

Zen Shuttles is in a testing period until April 29 to gauge student demand and fix any problems that may arise with the service.

Some students, like Eric Baylon, a sophomore studying mechanical engineering, said he would hesitate to use Zen Shuttles if they could only travel on the streets, which might not get him close enough to his classes.

"I would if they were accessible, because most of the time I go inside the school (for classes), not on the street," Baylon said.

Mistico said he hopes that Zen Shuttles will earn the trust of the ASU community and that giving free rides this week is helping the business achieve that goal.

"For most people, free is like, 'What do you mean free? What's the catch?'" Mistico said. "We had some people saying no because there's that trust there, and we're trying to build that with the community as well. Especially as ASU students, we get it, we understand, but for those that did say yes, they truly enjoyed it."