Opinion: ASU needs to do more to support Ukrainian students

The war in Ukraine has caused a lot of problems for Ukrainian students at ASU. The University needs to do more in their time of need

On Feb. 24, 2022, Russian President Vladimir Putin began a "special military operation" intending to launch a full-scale invasion into Ukraine. The situation in Ukraine is going from bad to worse as the Ukrainian people are fighting hard to resist the Russian military and are putting their lives on the line to defend their freedom and their country.

While the situation has been tense for Ukrainians in Eastern Europe, things have also been difficult for Ukrainian students, staff and faculty at ASU. ASU officials have reached out to Ukrainian students to offer to help them in any way possible, however, some students said the aid hasn’t been adequate and has failed to address some of the issues they face.

“Firstly, I would like to state that I don’t agree with this being a mere crisis. It is a full-fledged war," said Valeriia Starosek, an international student from Ukraine and senior studying computer science. Starosek expressed her strong displeasure with the use of words like “crisis” and “conflict” instead of “war,” as she feels that these terms tend to dilute the truth and leads to a lack of understanding among others who are not directly affected by it.

"I know what it is to be constantly afraid, to have no home."

Chechen journalist and @CronkiteHHH Fellow Milana Mazaeva says the Russian invasion of Ukraine has sparked flashbacks of her own trauma caused by the Chechen wars. @nytimes: https://t.co/RXhjrHe1Z1

Starosek said her mental health has been suffering. She explained how back in Ukraine, her family has had to relocate, but couldn’t cross the border to Poland because her stepfather needs to stay back and volunteer, as Ukraine has banned male citizens between the age of 18 and 60 from leaving the country to defend Ukraine. She said she faces survivor’s guilt as she feels in a position of privilege to be in a safe space here in the U.S.

Mykhaylo Mykhaylov, a freshman from Ukraine studying computer science, said “waking up every day to devastating news from Ukraine, dealing with the stress that it brings throughout the day while tending to my academic commitments has been difficult." Mykhaylov has been unable to sleep on time, partly to be able to talk to his family, because Ukraine is nine hours ahead of Arizona, and partly because of stress from listening to the news.

The war has affected these students’ day-to-day lives in the U.S. Students from Ukraine have been facing difficulties with their housing and piling debt, as their families back home have had a loss of livelihood and property as they relocate.

Families have less money, not just for themselves but also to support their children studying abroad, and nobody knows what the economy will look like going forward. Not to mention, the recent tuition increases as proposed by ASU President Michael Crow exacerbate existing financial concerns.

ASU has taken some steps to aid the students. Mykhaylov and Starosek said they received some emails from the Dean of Students, from the International Students and Scholars Center and some professors who have offered academic arrangements, temporary financial aid and access to counseling services at ASU.

The students want to have more help in terms of tuition, rent and better wages for on-campus jobs to make ends meet, and ASU could be doing more to aid them in this regard.

There should be support groups and community support made available to Ukrainian students so that they can make sense of the struggles they're facing, concentrate on their academics better or get any other help with mental health issues that they may seek.

Starosek said she hopes ASU provides services like flexible assignment deadlines, access to recorded lectures and other such academic or scheduling adjustments across the board for all Ukrainian students to ease stress in these areas when their necessities like food and shelter are in jeopardy.

She called for unity among Ukrainians and the international community to help each other in times of need. She said that in Ukrainian culture, it is always preferable to try and fix things themselves instead of asking for help, but she wants to emphasize the fact that these times are unprecedented and people should not hesitate to ask for help.

Now more than ever, these students need help and support from the University, from the government, and the community, including the community of international students studying at ASU. Volunteer for organizations that are trying to support them. It is upon us to support them and show them that they are not alone.

Reach out to the International Students and Scholars Center at 480-727-4776 or issc@asu.edu, or the Dean of Students Office at deanofstudents@asu.edu and ask for the help you need.

Donate to support families affected by the crisis in Ukraine through UNICEF here.

Editor's Note: A previous version of this story was published with a header illustration that did not accurately represent the borders of Ukraine. The story was updated on March 23, 2022. 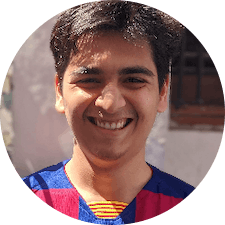 Vishrut Jha, a reporter for the Opinion Desk at The State Press, is an International Graduate student from India. He has previously worked as a full-stack software developer and as a TA at ASU. He's an ardent fan of the soccer club FC Barcelona and has extensive interest in American politics, tech, and sports.