Now in its 20th year, the ASU rowing club pushes their bodies to the limit during early morning practices and builds camaraderie off the water

Before the birds begin to sing, Declan Mayo-Shanahan is up at 4:30 a.m. to prepare for rowing practice. By 5:30 a.m., he and the rest of the rowing team are in the water doing the workout their coach has prepared.

They are on the water for an hour and a half, working every muscle to keep the boat steady and moving as the sun rises over Tempe Town Lake. At 7 a.m., the team is putting the boats back up, heading to class, and preparing to do it all again the next day.

This is the life of a member of the ASU club rowing team. It's a commitment Mayo-Shanahan has made since he was 12 years old when he first started rowing.

"The boat is my happy place," Mayo-Shanahan said. "I just like being in a boat. It brings me joy. There's something about going 100% with everything you physically have that is quite a lot of fun." 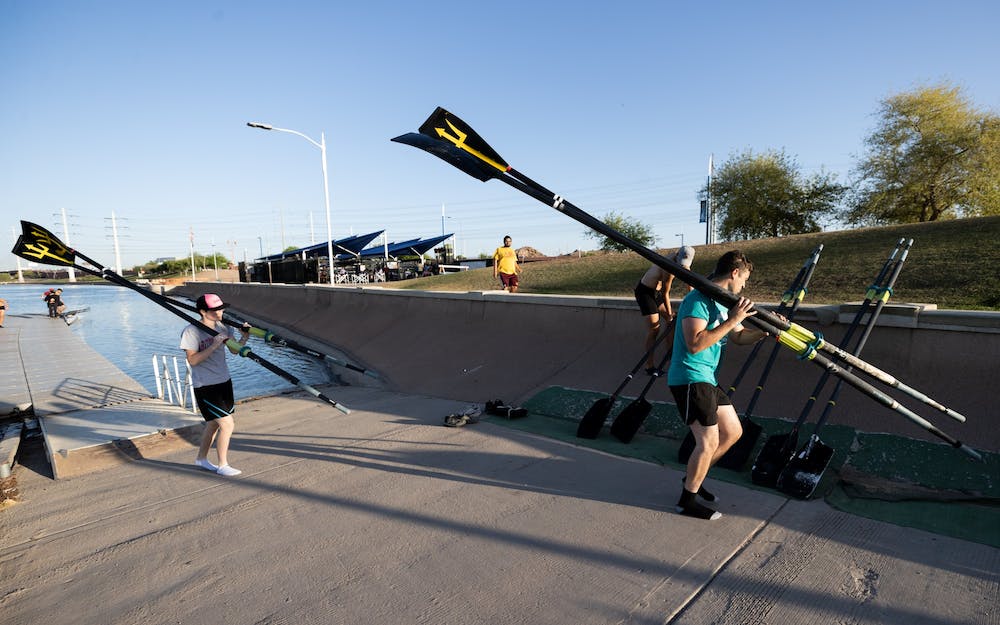 Members of the ASU rowing team carried their oars after practice on Monday, April 11, 2022, at Tempe Town Lake.

Mayo-Shanahan joined the rowing team as a freshman. The rowing team, founded in 2002, is in its 20th season as an ASU club sport. The team travels to cities in California for meets and will travel to Oak Ridge, Tennessee for the American Collegiate Rowing Association Nationals in May.

The team is still growing in terms of stature. It was in the running for promotion to Division I in the same year ASU hockey was elevated to an independent DI team.

"The end goal is making sure that we're continuing to talk about ourselves and not be silent about who we are as the rowing club at ASU," said sixth-year head coach Imran Malik. "We have to make sure that people know who we are and what we're doing and what we're trying to achieve."

The team is led by Malik who took over the club in 2016 after joining the rowing team his sophomore year.

"I fell in love with the sport from the second I held the oar," Malik said. "When I started coaching, I really enjoyed turning athletes into elite athletes that can compete at any level and into just overall good people."

For Malik, improving the rowers is a grueling process. Outside of early hours, rowing is one of the most physically demanding sports a person can do.

"Rowing is the toughest sport that no one talks about. It is grueling mornings, it's tough long workouts, it's using every muscle group that you have, which a lot you have no idea (you had)," men's team president Kaleo Bolosan said. "I would say the way I get through it is I always think back to why I'm growing, you know, everyone has to have a reason why they're growing."

The sport requires maximum effort from every major muscle group in one's body. From pushing with their legs, pulling with their arms and remaining strong and steady in their core, rowing takes a massive tax on someone's body. 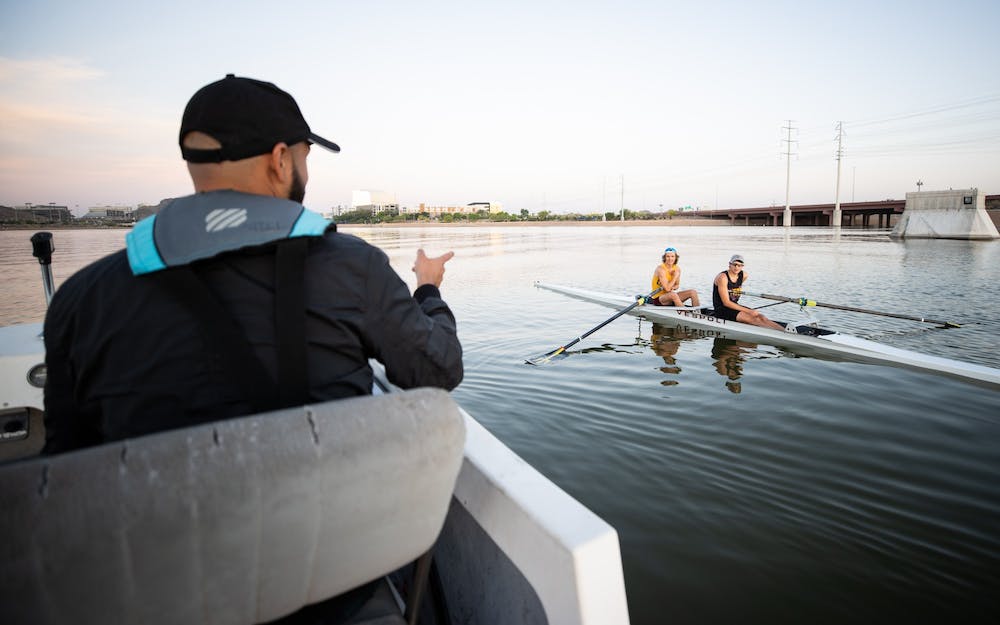 "There is no pain on this earth like racing a 2K," Mayo-Shanahan said. "It's a lot of work. I practice on the water for an hour and 45 minutes each morning, lift outside of practice and use rowing machines for cardio as well."

Along with the physical side, teamwork is key. Whether rowers are in a two-man, four-man or eight-man boat, every athlete has to be completely in sync with each other and the coxswain, the person at the front of the boat who tells the rower what rhythm and pace the boat needs to be at.

"There's a moment where it clicks for everyone, whether it's an eight or a four," Malik said. "It clicks and you're gliding through the water as one unit and you're doing the same thing at one time. There is just something beautiful about that."

The hard work and dedication it takes to be a rower is immense, and the rowers can burn out due to the heavy workload of rowing on top of being a college student, but the team bonds through hardship and creates friendships. 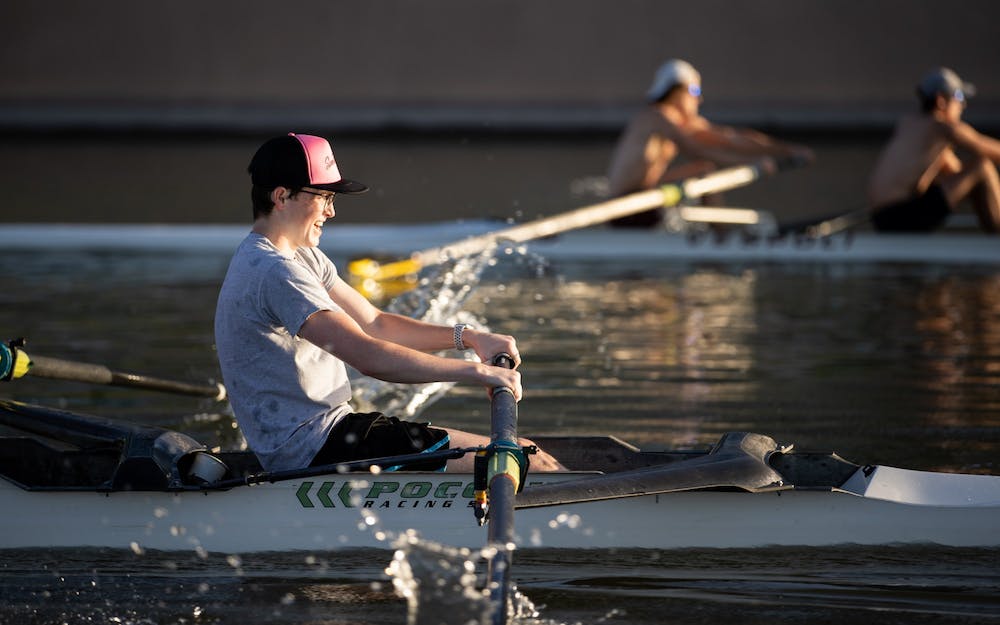 "I hang out with most people on the team at least once a day outside of practice, and the team usually has events and stuff together," Mayo-Shanahan said. "We go see movies, we go hang out and have parties, all that nonsense."

Along with continuing to be competitive in races, the team has been contributing to outside activities to grow the team.

"We try to make connections and grow our presence that way," Bolosan said. "ASU is a massive school and our team is tiny in comparison. The biggest thing we can do is just keep advertising our name and that we exist and are competitive."

Both women's and men's teams have two regattas, rowing's terms for races and meets, left in the spring semester. The Western Intercollegiate Rowing Association championship races will take place in Sacramento, California at the end of April, and then they finish the season in late May at the ACRA Nationals.

Being on the team is a kind of work ethic almost everyone would choose to avoid, but the rowers have their own reasons for doing it.

"You need to have a true purpose for rowing," Bolosan said. "Sometimes it could be athletes say they're rowing to have a social club, and that will only take them so far. When I'm in the water I feel like I'm outside the world and am able to enjoy myself and think about nothing but rowing."

Regardless of why they row, members of the team do not argue that watching the sun come up over the lake is anything but a bonus that helps them wake up the next morning and do it all over again.