A cut above: ASU researchers head studies on cannabis contaminants

There’s a print of cannabis sativa hanging on the cork board next to Maxwell Leung’s office at ASU's West campus.

On one of his first days on campus, Leung forgot his key, so he tracked down a campus security guard to unlock the door.

As the two stood in the faculty hallway, the officer shot a look from the art print to Leung, insinuating some unspoken grief or, at the very least, confusion about the illicit plant adorning his office placard.

The key turned. Leung entered his office and went about his day. It’s nothing new.

Cannabis continues to be a point of contradiction.

Leung, a toxicologist and assistant professor at ASU, is most concerned with contaminants used in cannabis cultivation.

There are no unified regulatory guidelines governing cannabis contaminants. And when left unchecked, pesticides, metals, solvents and other toxins pose health hazards to both recreational cannabis users and medical patients, especially those with susceptible neurological diseases.

The lapse in understanding led Leung to create the Systems Biology and Toxicology Laboratory, a collaborative cannabis research effort encompassing three projects. The lab holds a schedule I research license, a license with the highest restrictions for storing, handling and testing a substance.

The network of cannabis researchers spawned work on the neurotoxicology of contaminants and cannabinoids, the potential of contaminant exposure for Parkinson's patients using CBD and a comprehensive geospatial analysis of how cannabis and hemp production and use affect environmental and human health.

“We are definitely one of the leaders in this field,” Leung said. “I’m very fortunate to have really, really good people joining my group.”

A wire silently slides across a petri dish scattered with some dozen millimeter-long roundworms. It leaves liquid pearls in its path, hovering on the agar.

The worms recoil, shrivel up or slow down into a somewhat stoned stupor.

Laura Jameson, the lead lab technician, sits eye to the microscope, tracing the line and recording each reaction. In every wiggle or wither, she comes one step closer to piecing together the relationship between cannabis, contaminants and brain function.

The worms are first exposed to contaminants or cannabinoids, then Jameson lines the noxious chemical, 1-nonanl, on the petri dish to asses their reaction time. 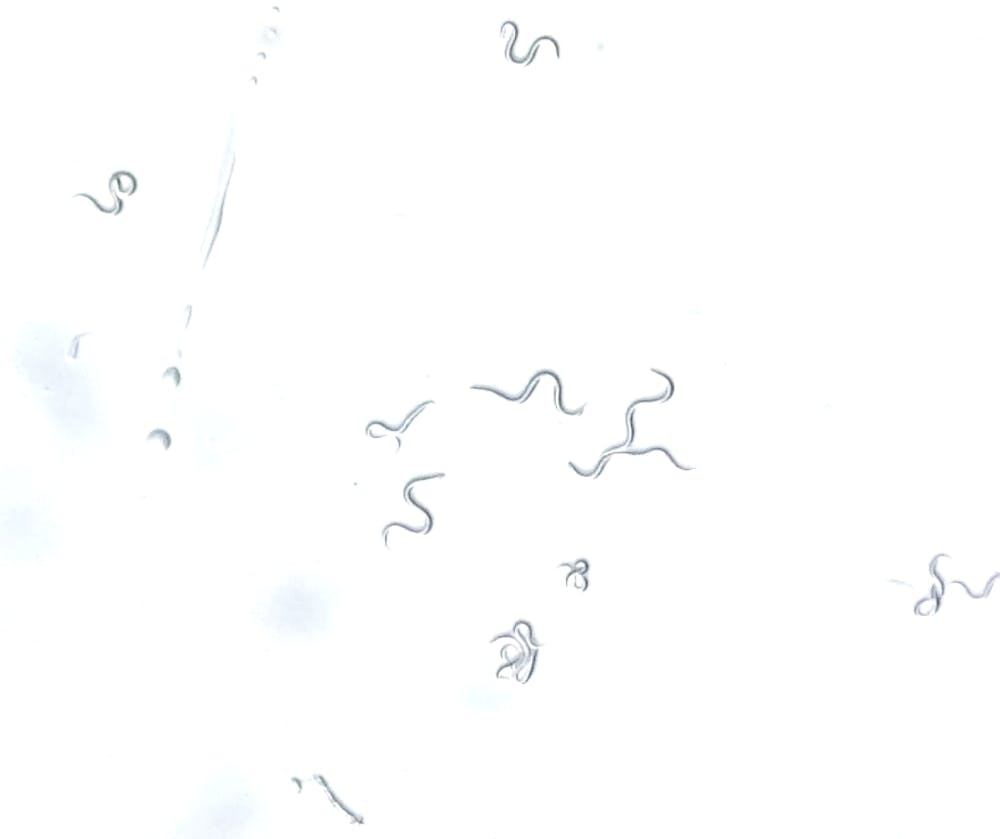 “You have to learn how the brain works and then how to break it,” Jameson said.

Leung was heading from University of California, Davis to ASU around the same time Jameson graduated in 2020. He needed a technician familiar with roundworms, known as caenorhabditis elegans, or C. elegans, to get a lab up and running.

Jameson has worked with C. elegans since the summer after her senior year of high school. As a minted molecular biologist and neuroscientist, surveying reactions to brain-changing chemicals just seemed to make sense.

She now serves as the lead technician in the neurotoxicology lab, where, aside from testing samples, she handles everyday operations like overseeing lab safety, training students and writing grants and research papers.

Though trials are well underway, the lab did not go off without a hitch. Jameson and Leung spent months waiting on supplies; when they arrived, stacks of boxes crowded the laboratory for weeks.

Then came the bureaucratic hoops necessary to secure the schedule I permit to store and test cannabis compounds.

Jameson and Leung needed to quadruple lock a fridge containing the substance and secure approval from the Drug Enforcement Agency, which sent two agents to give the lab the green light amid the cardboard-box chaos.

The two find it funny, though, that the THC compounds remain locked up in a magnetized, chained and bolted mini fridge while more dangerous compounds and chemicals sit in unlocked glass lab cabinets.

Now, Jameson spends hours in the lab testing, monitoring and timing different reactions. She’s also in the middle of interviewing for Ph.D. programs and prepping the lab to pass on to another technician.

“My legacy is in the students that keep the lab running after I'm gone,” Jameson said. She turned to Leung, “But you're not allowed to change the labels that I have on all the drawers. My handwriting must live on in the lab.”

Thomas Cahill sits in his office, the shelves behind him set with plants, geodes and sun-bathed amethysts.

Cahill, an environmental chemist and associate professor at the School of Mathematical and Natural Sciences, is one of the researchers looking into the presence of contaminants in CBD and its potential risk to patients with Parkinson’s disease.

CBD, or cannabidiol, has taken on a generally positive reputation as it delivers the “therapeutic” properties of cannabis without the psychoactive presence of THC.

But researchers are increasingly concerned about the true scope of pesticides, metals, solvents and microbial contamination in CBD products, especially as it’s used to treat neurological disorders.

What’s most concerning to Cahill, Leung and their colleagues is the lack of data and information on the subject entirely.

Collaborators on the project include Cahill, Leung, Daniel Peterson, an assistant professor at the College of Health Solutions, and Majia Nadesan, a professor at the School of Social and Behavioral Sciences.

The group is developing surveys to understand and study the scope of CBD usage among patients with Parkinson's. Then, they hope to determine the levels of contaminants in CBD products and assess public perception of contaminants in cannabis and CBD.

Leung submitted a separate bid for another schedule I research permit in hopes that researchers can start testing contaminant levels themselves. In the interim, the team is outsourcing data from cannabis and hemp testing labs, though they feel it’s still not enough.

“There’s so much business and resources put into this,” Leung said. “But so little information comes out.”

Leung is also writing a grant to partner with the Mayo Clinic on the research, which will hopefully provide the project with more resources.

“There are ways we can mitigate hazard if we know about it,” Cahill said. “But the lack of knowledge is our main problem.”

The map lights up red with bright yellow points freckled all over. Each fluorescent dot represents a hemp or cannabis growth location in the greater Phoenix area, the shades of red indicate levels of population density. 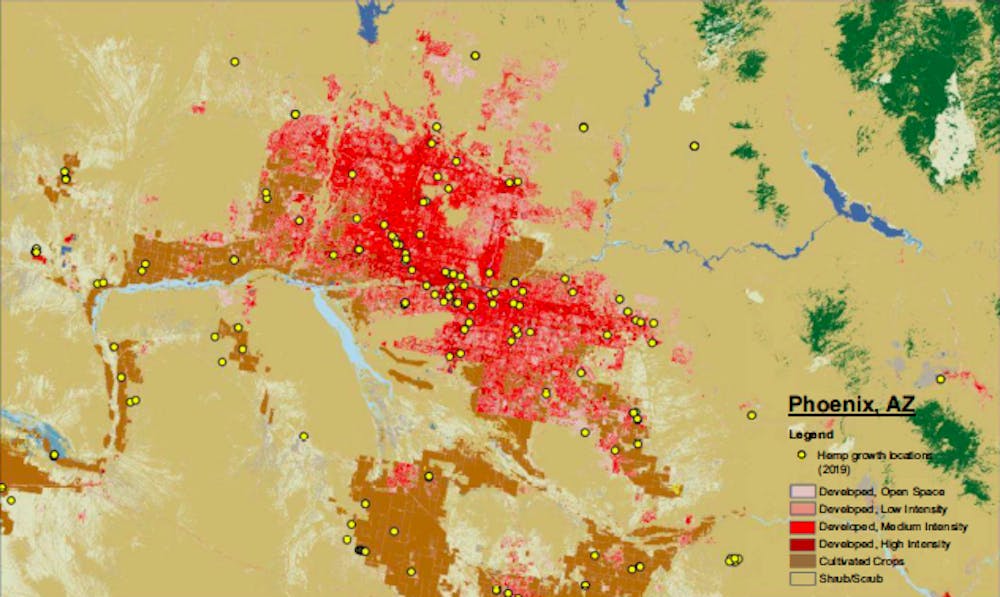 Cannabis sativa cultivation bloomed in Arizona in the last four years after the passage of the 2018 Farm Bill, a piece of legislation which legalized the cultivation and production of hemp.

The plant also has properties capable of sequestering minerals and chemical pollutants from the environment. But, the emergence of industrial hemp can affect the chemical and environmental exposures in water, soil and food and can both positively and negatively affect human health.

Researchers at ASU are using geospatial analysis, a mapped out data visualization method, to derive assessments on socio-ecological implications of the emerging cannabis and hemp agriculture and market.

Amy Frazier, associate professor at the School of Geographical Sciences and Urban Planning, and Ken Sweat, principal lecturer at the School of Mathematical and Natural Sciences, are focusing on how density and distribution of hemp agriculture are driven by region-specific socio-ecological factors.

Madeline Meier, an associate professor in psychology, is looking into how dispensary locations in Arizona correlate to socio-economic factors and health outcomes on a local scale.

Leung is leading students in learning the ropes of geospatial analysis through analyzing cannabis sativa’s impact on the environment in a special topics lab, specifically looking at the potential application of industrial hemp in environmental remediation.

Students are tasked with creating their own geospatial analysis given environmental data. They are specifically looking at sites where selenium and arsenic are present.

Leung views geospatial analysis as an invaluable tool for communicating complex data. He said throwing a bunch of numbers at someone does not always relay the impacts in a concise and engaging way.

“You have to relate,” Leung said. “That’s the power of data visualization.”

The Presidential Graduate Assistantship would financially support one Black trainee to pursue Ph.D. training in the environmental health impact of cannabis. The grant covers tuition, student health insurance and a 50% TA or RA position at the minimum rate of pay or higher each year.

Leung, once a first-generation student himself, sees the grant as a palpable way to support students. He also recognizes the ripple created by furthering research on cannabis with social equity in mind.

“Social equity is about empowering people,” Leung said. “Research and teaching has got to be a part of the conversation.”