State of the Arts: Interviews with some of ASU's rising creatives

State Press Magazine spoke with some of ASU's art students who share inspirations across mediums. With diverse backgrounds and distinct emotions, all of them reach within themselves to create works they hope will shape the world around them.

Jacey Coca, Philip Steverson, Everett Milloy and Bethany Jean Larson each discuss their backgrounds, inspirations and artistic processes and share their hope for the future of art. 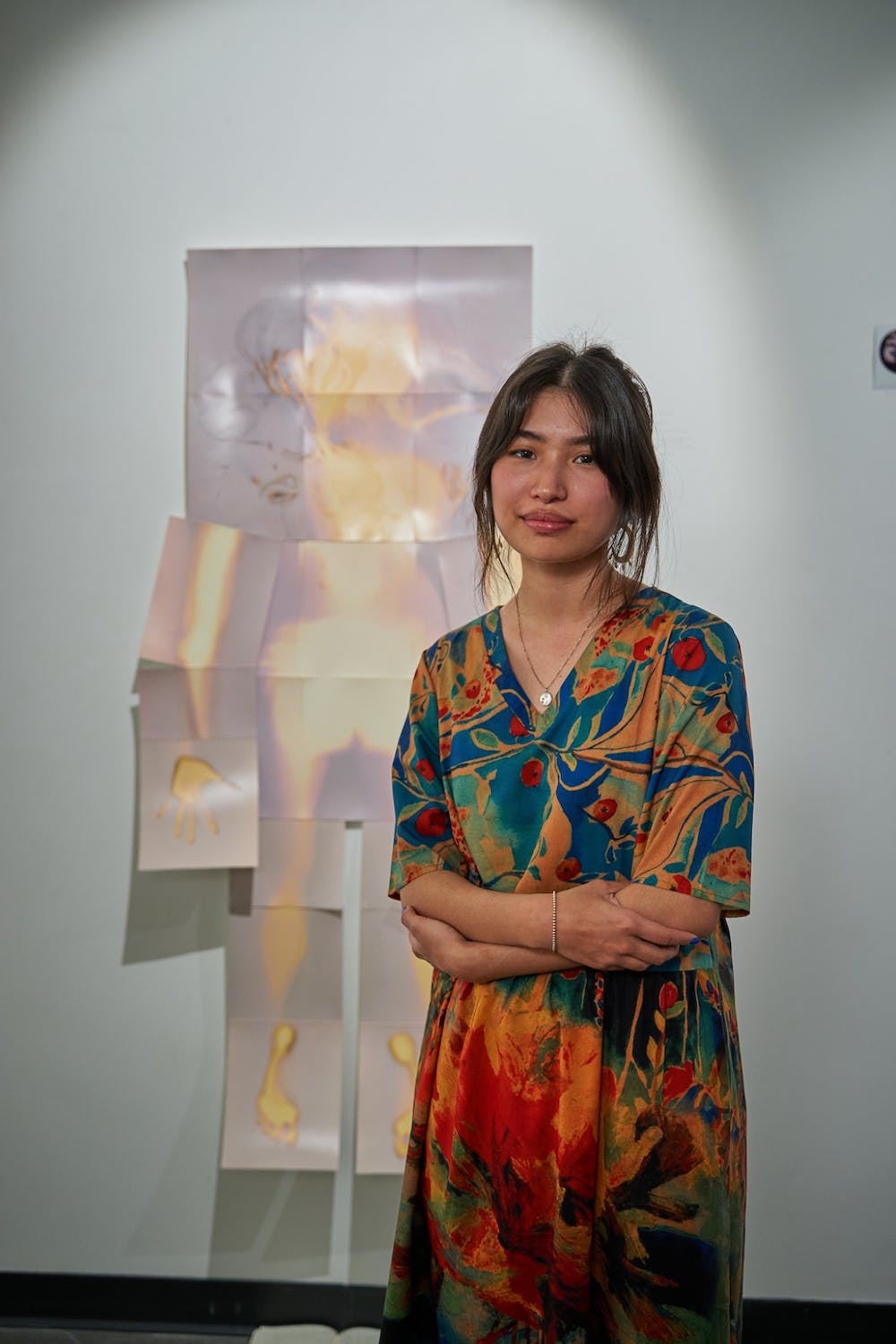 Jacey Cocoa poses for a photo in front of her artwork inside Gallery 100 in Tempe on March 22, 2022.

Jacey Coca sits in her bedroom, talking about the time she joined a band in high school with a group of people she didn’t know.

“It was very uncomfortable,” Coca recalls, but she said it was the push she needed to get out of her comfort zone and into a creative mindset. She began to feel less guarded toward performing and sharing her creations with the world.

Coca, a senior studying photography, works with several mediums; singing, writing lyrics and drawing are all part of her creative process.

Coca also works with lumen prints, a process that involves creating images by setting objects on photo paper and exposing them to the sun.

For one of Coca’s recent projects, she took lumen prints of her whole body and stitched each piece of paper together with her own hair. The process involved sitting on photographic paper in the sun for up to an hour at a time, which left her sunburnt every time. She said the development changed her relationship with her current and previous work as she grappled with the reality that prints were harming and killing the subject being photographed.

"The images that come out are really pretty, but the process of putting myself as the subject matter is very violent,” Coca said. “I put a lot of emphasis on the process, a lot happens there. It's just you and the medium. You can record it, but the viewers will never know how much time and effort it takes.”

Much of Coca’s work is centered around change, nostalgia and death. Creating art allows Coca to explore her thoughts in a safe space. While intrusive thoughts can be dangerous when trapped inside her head, putting them on the table and assessing them proves therapeutic for her.

“I make work to help me get through existing. I’m just exploring right now and trying to learn about myself through art,” Coca said. “There’s a relationship you build with the thing you're working with, that’s between you and the work. Once I put it out, then the viewers can do whatever they want with it.” 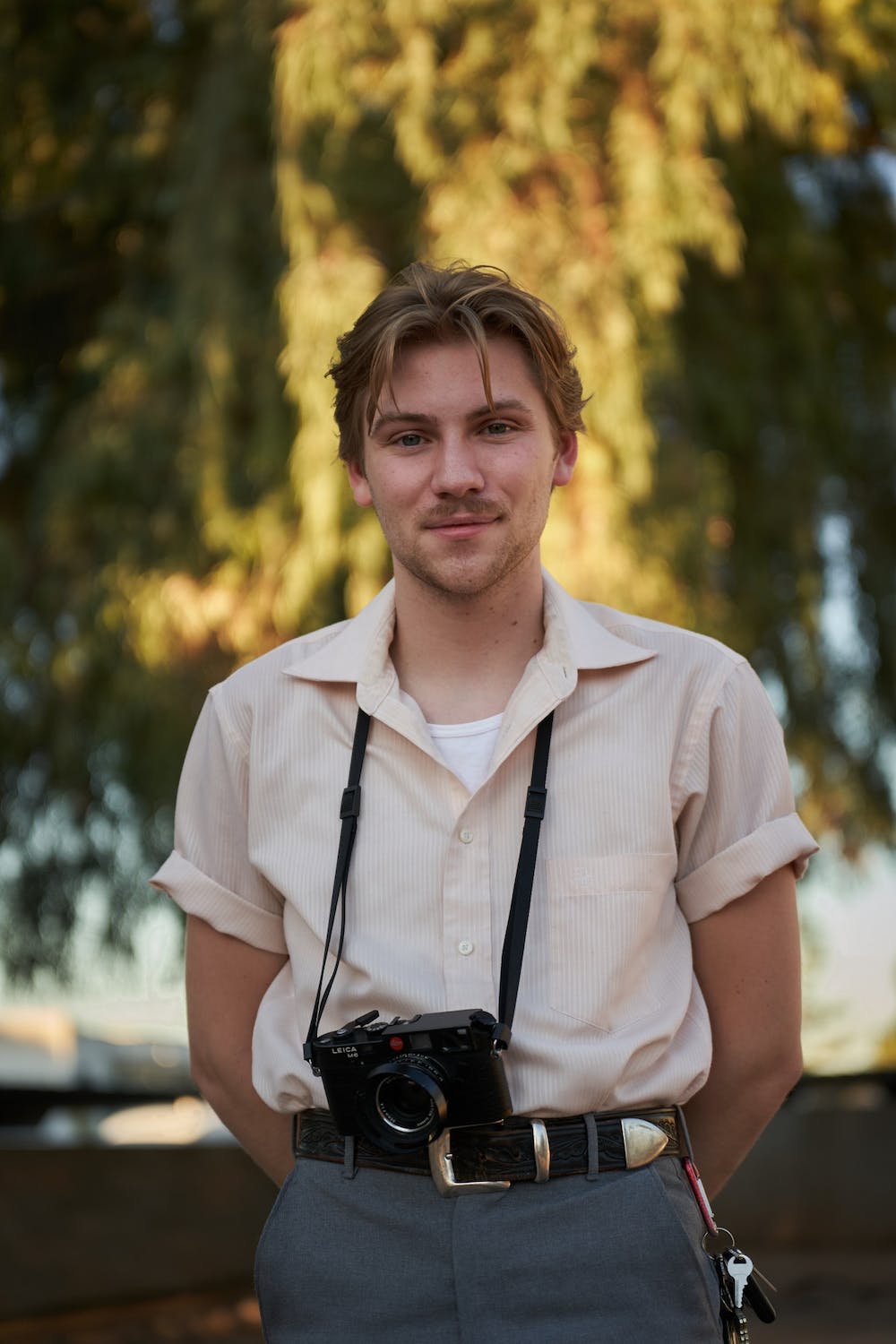 Everett Milloy’s photography did not begin with the purest intentions. When he was in high school, a girl he had a crush on did photography, so he began pursuing the craft.

“She’s married now,” he shrugged and laughed. While his attempts to capture the girl were unsuccessful, he discovered his love for capturing images.

Milloy, a junior studying photography who has been photographing for five years, said he experiences personal growth through his work as he aims to create more meaningful images. During his early years, Milloy recalls copying famous artists, like Richard Avedon, an American photographer known for his portraits of strong characters.

“A professor told me, ‘There is no reason you should be even remotely photographing like him. You need to make work that stands out and doesn't play into the past,’” he recalls. “There's thousands of years ahead of us, especially with photography. You aren't going to make a mark by copying someone who's dead.”

As he weans off taking easy portraits of conventionally attractive people, he aims to capture more important societal messages. One series he worked on, titled “We All Talk About Leaving,” highlights the tale of Washburn, North Dakota, a dying town experiencing the effects of one of their largest employers, a coal plant, shutting down as the town switched to natural gas.

Another series, titled “Bare,” a series of portraits centered around the premise of shaving your head, was featured in Vanity Fair last year as one of the publication's best spring art books.

“You have this loss of innocence where you hold so much identity within your hair, and as you shave it, you become a different self than what you used to be,” Milloy said, describing the project.

When Milloy shoots, he brings five or six cameras. Each photo, after the price of film, developing chemistry and scanning or printing, costs him on average about $5, forcing him to photograph with intention.

“A lot of my work has to do with this understanding of ephemerality. Like, ‘it's gonna be great, but it's gonna die soon.’ I want to capture a history as well as a looming departure,” Milloy said. He aims to create photos that are so “deeply, richly human that you just can't help but gawk and share a feeling of pain and understanding with them.”

Taking skillful photos is not easy, and growing as a photographer calls for discipline and dedication. Milloy describes nights when he goes to the photo-lab, works until 2 a.m., falls asleep on the couch in the photo-finishing room, wakes up at 5 a.m. and keeps printing.

All in all, Milloy finds delight in photography. “It's a gorgeous medium that we've had for such a small amount of time in human existence,” he said. “I'm more excited to see where this medium grows throughout my lifetime.” 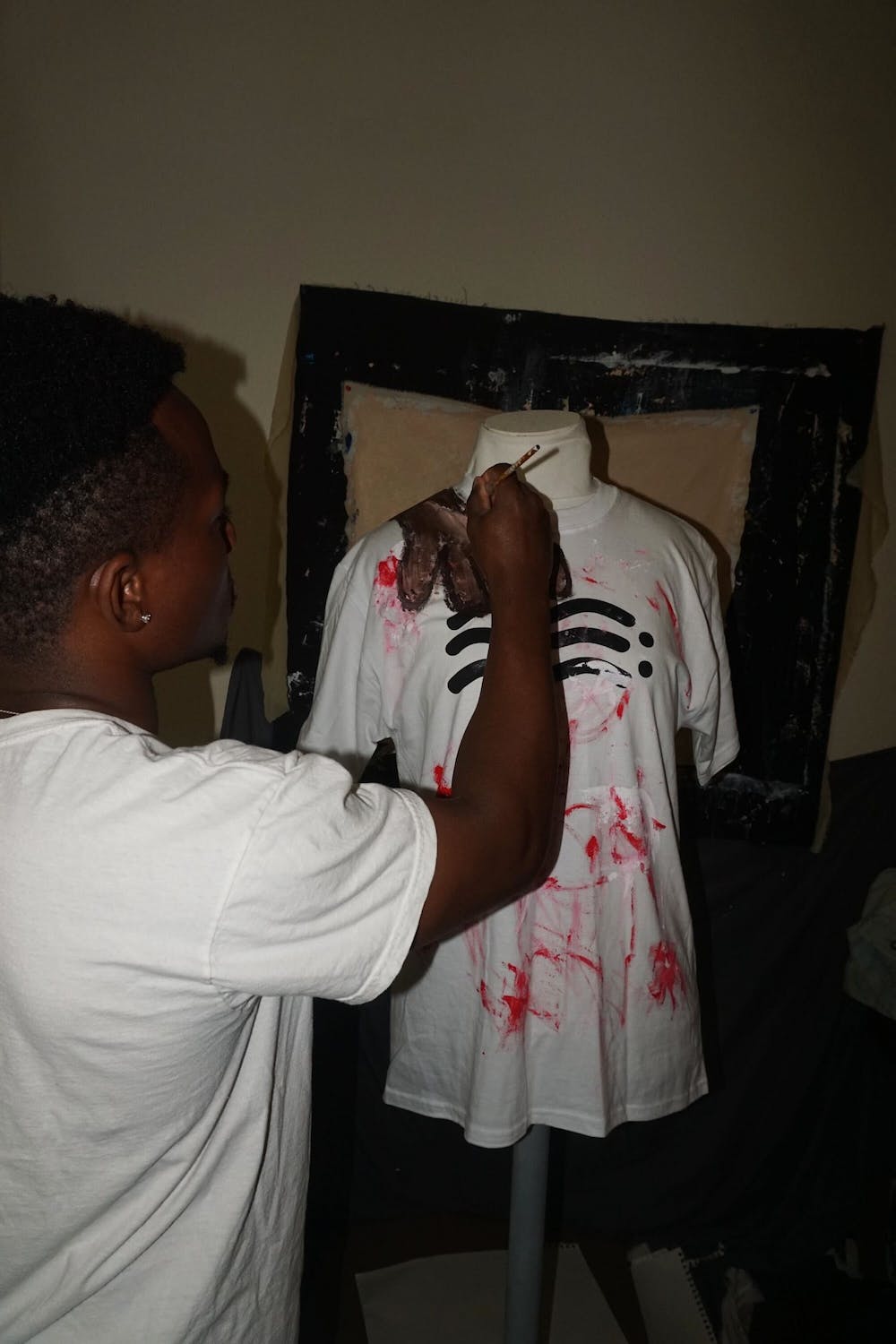 Philip Stevenson paints on clothing in his home studio on Oct. 20, 2021. Photo courtesy of NFN Sonkwaiataroroks

Philip Steverson began writing around the age of 10. His first love was poetry.

Soon after, he began exploring sketching and later became enamored with fashion. Now, as a fashion design and creative writing student, Steverson describes how visual arts held a strong grip on his life over the past three years.

Steverson finds inspiration in all aspects of life and relishes in his process of gathering information, partially from research on the internet and partially through inspiration he finds from the common, and often mundane, images of everyday life.

“Inspiration hits randomly — I'll be on my way to bed or just outside, it comes together like a puzzle,” Steverson said.

Steverson said he is adamantly against gatekeeping tips from other artists-to-be and describes his relationship with other artists as an ebb and flow of information and ideas.

“We elevate each other. I want everybody to know these things.” His biggest goal for his art is to simply inspire others to explore opportunities for creation themselves.

A self-proclaimed graduate of “YouTube University,” Steverson said the majority of what he knows about painting he’s taught himself. His work serves as a snapshot of his inner self, emotions and traumas.

One of his most recent pieces is a self-portrait of him squatting while he wears a memorial T-shirt for his mother who recently passed away. The piece mixes painting with textile art as he stitched elements of the piece into the canvas.

While the piece is adorned with charming roses and gold accents, a closer look at his face shows his red eyes filled with pain and exhaustion.

Steverson’s art has helped him find his voice to say the things he can’t. “I have trouble speaking about the traumas that I have in my life and the stigmas that hit me in the head every day,” Steverson said. “But if you don't embrace your background, is your art really that genuine?” 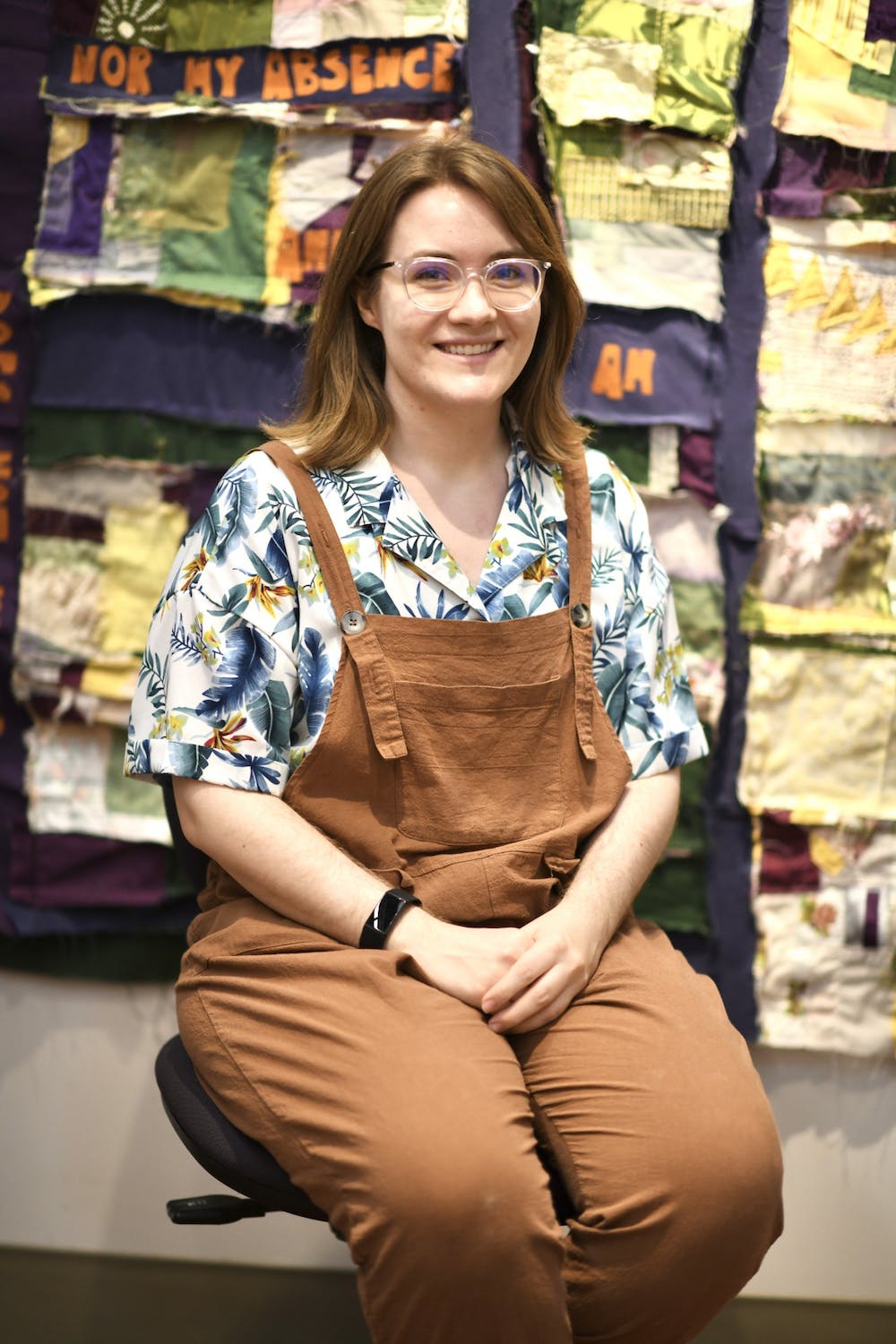 Bethany Larson poses for a photo in front of her textile creation in downtown Phoenix on March 23, 2022.

Bethany Jean Larson is a multidisciplinary artist currently getting her master’s in fibers at ASU. She works extensively with quilting, creating designs by stitching scraps of fabric together into intricate patterns.

Larson pursued her undergraduate degree in Asian studies and studio art at Knox College in Galesburg, Illinois. During undergrad, she worked on large transient sculptures she would assemble at the beginning of the year and slowly dissolve by the end.

After graduating, Larson moved to Japan for six years. She soon began pulling from her upbringing in rural southeast Iowa, where quilting was a part of her childhood, and began working with textiles.

Larson aims to explore the juxtaposition of craft and contemporary art, finding ways to combine the two through her work. She is also learning more about the rich history of quilting and craft art.

In the U.S., quilting began as a functional means of providing warmth, but as it evolved, it became an integral part of women’s history. While sewing was an extremely common art form in women's lives, in the art world, it has been considered less notable and esteemed.

Through Larson’s exploration of craft art, she learned how much she enjoyed the actual process of creating, which helped her understand the roots of her passion for art.

“It is very satisfying when I'm working, to see nothing and slowly build something until you have a finished product. The progression — that alone is satisfying,” she said. Larson rarely has a set idea when she creates, adopting a go-with-the-flow approach.

“Some things just need to be material explorations,” Larson said. “I learn just as much from things that I'm not so happy about as I do with the things I am.”

Larson doesn’t usually aim to transmit a specific message through her work; rather she tries to create a space for her to work through her emotions. Through her art, Larson has found comfort in imperfection.

Larson hopes to help others reconsider the everyday objects surrounding them. “Reconsider the quilts in your everyday lives,” she said. “It can be very special for someone to make you a quilt. It's not some old fussy thing.”