David Shiffman is a marine conservation biologist who loves sharks, and his new book sheds more light on how we can help them

Kids growing up in the concrete jungle of Pittsburgh are nearly 400 miles away from the ocean. But for David Shiffman, the distance made the ocean feel more magical.

"There's something about the ocean in your imagination, when you don't grow up seeing it all the time, that just makes it even more amazing," Shiffman said.

Shiffman, a marine conservation biologist who teaches an online course on marine biology at ASU, is a passionate shark researcher and advocate for marine life conservation. Shiffman wants to help his favorite animals at a time when 37% of the world's sharks and rays are threatened with extinction — primarily due to overfishing and the destruction of their habitats by climate change, according to the International Union for Conservation of Nature.

As part of his career educating the public about sharks, Shiffman has taught students marine biology, fought against misinformation on social media and published a book about his favorite animals. 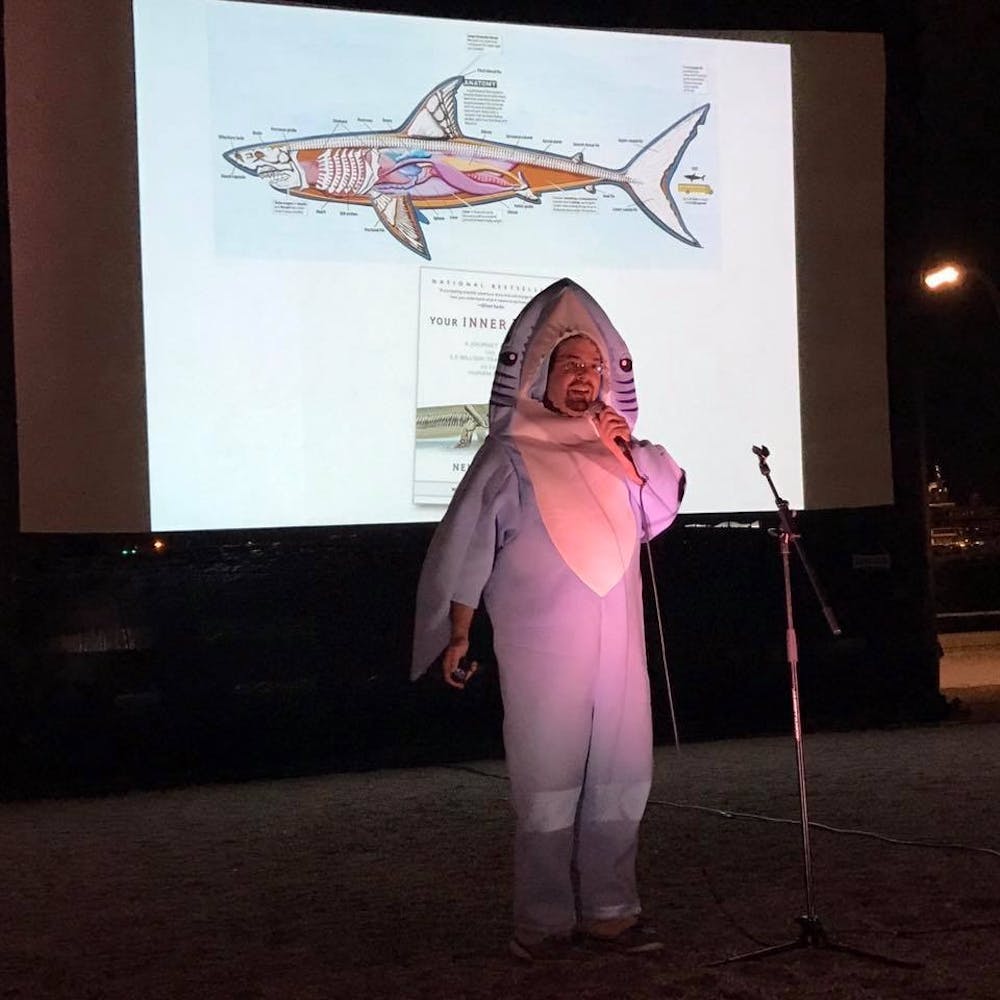 Dr. David Shiffman giving a talk at the Perez museum in Miami.

Shiffman said it's important for everyone to know how healthy shark populations benefit humans everywhere.

Shiffman has been fascinated with marine biology and sharks since he was a kid, and he took that passion with him throughout his academic career.

After receiving his doctorate in ecosystem science and policy in 2016 from the University of Miami where he did a dissertation about shark conservation, Shiffman studied public attitudes toward shark conservation at Simon Fraser University in Canada as a Liber Ero research fellow.

Shiffman's research on shark conservation piqued the interest of his peers, including Lara Ferry, a senior associate dean for the Knowledge Enterprise in the New College of Interdisciplinary Arts and Sciences, who met Shiffman when he was an editor at the American Elasmobranch Society. The American Elasmobranch Society is an organization that studies sharks and rays.

Ferry said Shiffman is skilled in taking what he has learned from his research and communicating it with lawmakers to enact policies that protect marine life.She got Shiffman a position at ASU where he began teaching an online marine biology course for students from any major.

"(Students) say things that are rare to see on teaching evaluations," Ferry said. "They say things like 'You changed the way I look at the world.'"

Besides making a splash at ASU, Shiffman has also made the rounds on Twitter, where he regularly tweets about marine-life studies, and makes a yearly habit of debunking shark myths disseminated on Discovery Channel's "Shark Week," a week-long shark documentary marathon. The bark about sharks is worse than their bite, according to Shiffman.

That thing they just said on Shark Week is not true!

(I'm not actually watching live, I scheduled this tweet three weeks ago, but there's a good chance it's correct)

"I try to bust some myths and some misconceptions and say that actually, we're a lot better off with healthy shark populations than we are without them," Shiffman said.

Shiffman got a Twitter account in 2009, a time when some of his peers thought it was unprofessional for researchers to be on social media. Shiffman realized social media could be an effective tool for scientists to communicate with the public and combat the spread of misinformation.

"I think the last few years have shown us that it matters, that real, correct information from experts is shared rather than pseudo-scientific conspiracy theory nonsense," Shiffman said. "And part of that means more people who know what they're talking about need to be in the trenches on the front lines."

To help promote a more positive message about sharks, Shiffman published a book in May introducing readers to the world of sharks, how they benefit our ecosystem and how we can protect them.

I'm giving a book tour talk in Spokane tonight, at 7 at @auntiesbooks ! Free talk about sharks, shark science, and shark conservation, suitable for all ages. I'll be signing books as well. https://t.co/ZzkQke72iy pic.twitter.com/eEZwaY11yd

In "Why Sharks Matter: A Deep Dive with the World's Most Misunderstood Predator," Shiffman explores areas of shark conservation less known by the public, like sustainable shark fisheries — geographic areas where fish, including sharks, are harvested.

Catherine Macdonald, a marine conservation biologist who has studied shark conservation policies with Shiffman, said although it is understandable why people would want to stop shark fishing, sustainable shark fisheries can addresses the economic needs of communities that rely on sharks as a food source while keeping shark populations healthy.

"Globally, many shark fisheries are important to the food security of communities that are vulnerable to food scarcity," Macdonald said.

In documentaries and on social media, Shiffman said certain conservation policies get more attention than others, usually to the detriment of our oceans.

"You would get the impression from following certain influential accounts from non-experts on social media, or from watching 'Shark Week' or from movies like 'Seaspiracy' that the only threat facing sharks is shark fin soup … when you only focus on a tiny part of the problem, you ignore a lot of the problems," Shiffman said.

Even though some policies that would help shark populations and the ocean are brushed aside, Shiffman said there are places where progress is being made, like provisions in the Inflation Reduction Act.

"There's a lot of great stuff for the climate and the environment in that bill, including some ocean conservation and coastal conservation money that hasn't gotten a lot of publicity yet," Shiffman said. "That we could accomplish that while the country is facing so many other challenges in such a narrowly divided Senate gives me a lot of hope."