Students at Learning Futures are developing a virtual reality learning space called Huddle that will be tested by an ASU class later this semester. Huddle is an instructor-led virtual learning experience running on new cellular technology that will be used as a teaching tool.

In Huddle, students, using VR headsets and controllers, can interact with virtual objects —  like a piece of coral or a model of water molecules — and their environment to learn about different subjects. Huddle allows students to choose their avatars, which look like stick-figure characters, and draw 3D objects with a pen tool.

While developing Huddle, the team thought students, many of whom grew up playing video games, would be familiar with the video game-like nature of Huddle, said Dan Munnerley, executive director of ASU Learning Futures.

"Learners right now, in the K-12 system, have grown up with things like Roblox, with Minecraft, with gaming, that's really the way all of us, me included, have come through," Munnerley said. "And they've learned a lot in that space. So why shouldn't they continue learning now in university using the skills they've already picked up along the way?"

One of Huddle's first tests with students outside of the team will happen in a few weeks at Learning Futures, located in the Creativity Commons building in Tempe, with students and their instructor from HST 130: The Historian's Craft, Kidd said.

Huddle can be used in history classes to immerse students in a historical virtual space, like the trenches of World War I, and allow them to handle virtual artifacts from that time period, Munnerley said.

"They bring artifacts from history to life in Huddle where students can actually get a hold of these pieces of history, inspect them closely, pass them around, and see them in context," Munnerley said.

The students from the history class will work in small groups and be led by an instructor who controls what tools and objects the students can see or use. Huddle uses Oculus headsets and controllers and is connected by 5G, a cellular technology that is faster and with fewer delays in transmitting data than previous technology on cellular networks.

"This whole space is lit up with 5G," Kidd said. 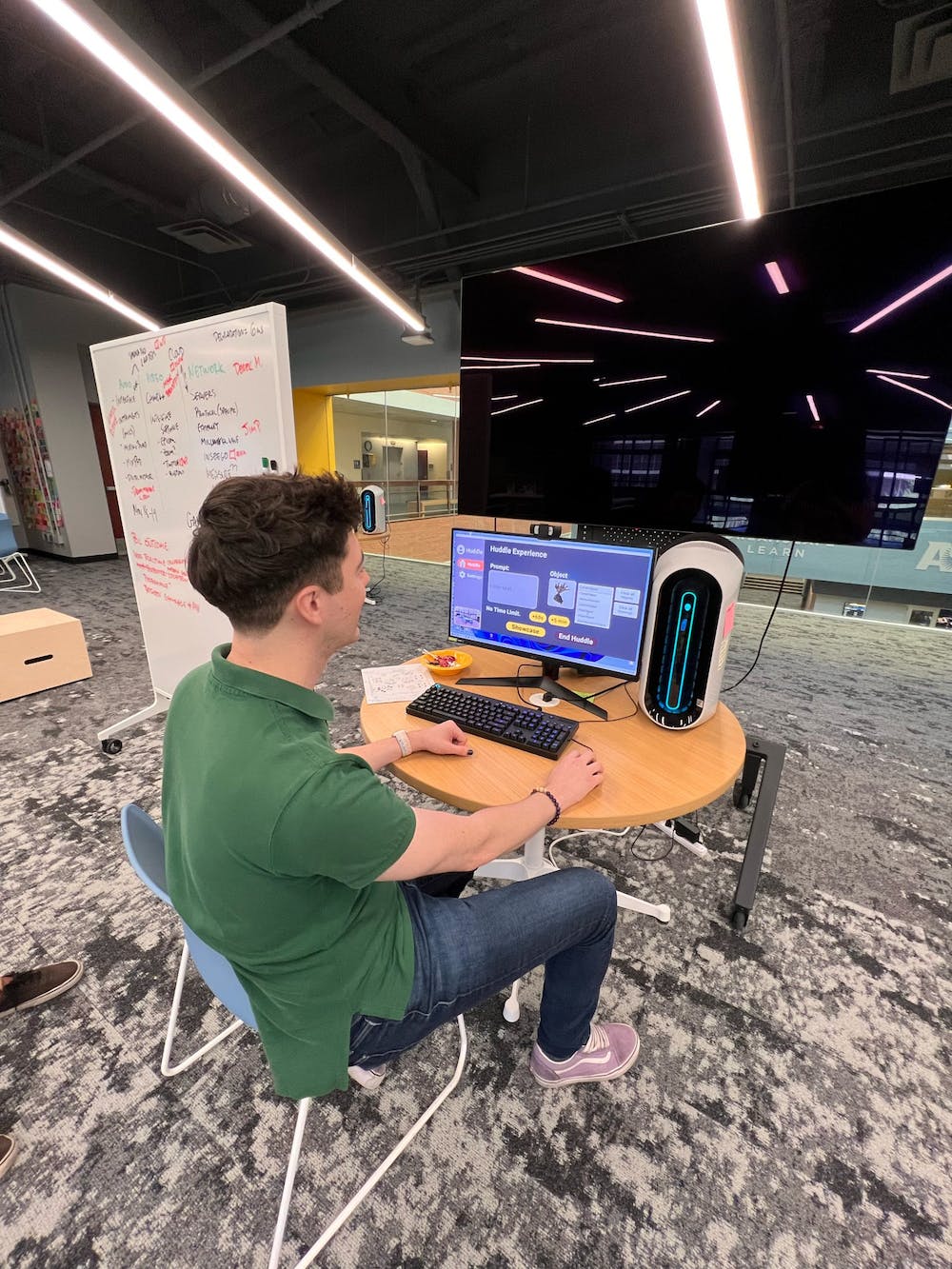 Although the first tests will be done at Learning Futures, classes will not have to come to that location in the future to use Huddle because the equipment Huddle runs on is portable and can be brought to classrooms. Next semester, the Huddle team is planning to bring its VR learning experience to a Thunderbird School of Global Management class, Kidd said.

Some students who have used VR are open to it being used in classrooms for instruction. Ernesto Peralta, a freshman studying secondary English education, said he has played VR video games before and thinks VR technology can teach people who are both auditory and visual learners.

Huddle will not be the first application of VR as a learning technology for ASU classes. Students in BIO 100: The Living World classes do virtual labs in Dreamscape Learn, a VR experience where students learn about ecology and explore an alien zoo.

Learning Futures is developing other VR software, including simulations to teach people the nuances of cross-cultural norms and an interactive, virtual replica of the ASU Tempe campus.

The multitude of areas that VR is being applied shows the opportunity that the technology poses is being embraced, Kidd said.

"Virtual reality isn't new," Kidd said. "This technology has been around for decades, but we're finally at a point where we can see that there are multiple groups pursuing multiple avenues of deployment for immersive technology. And that's a good thing. That means that there is plenty of work for people to be doing and plenty of innovation to be happening and pushing forward the education using immersive tools."

For Munnerley, VR technology is a great opportunity for students who struggle with traditional ways of learning in school like himself.

"I think that's been what's driven me is to find a platform that works for those people that don't typically fit the university model, and to create 3D immersive learning environments that actually engage and excite kids who don't get those opportunities," Munnerley said. "I think that's what VR does is it puts things in your hand physically. It puts you in different worlds and lets you kind of be in places you would never get access to."

Correction: A previous version of this story incorrectly stated Munnerley's job title. He is the executive director of ASU Learning Futures. This story was updated on Sept. 30 at 6:35 p.m. to correct the error.