From Shandong, China, Zeng is a Ph.D. student in literature in the Department of English at ASU, an English-Chinese literary translator, and a singer-songwriter with publications on digital music platforms under the name 曾寅 (Zeng Yin).

He is working on his first bilingual book: a Chinese translation of William Blake's “Songs of Innocence and of Experience," which will be published next year.

Roman Jakobson, one of the most influential linguists of the 20th century, defined translation as "the interpretation of verbal signs by means of some other language."

Zeng's interpretation is not limited to texts. With music, he explores new translation possibilities. Through his work, he enriches and expands the boundaries of literature beyond art forms.

Since 2018, he has been turning poems into songs. His most well-known poetry-music translation, an adaptation of William Blake's “The Echoing Green,” was his master's dissertation and was presented at the Global Blake conference in January 2022. He has also translated for the Thousand Languages Project database at ASU this year.

I spoke to Zeng to learn about how music, literature and translation are interlinked in his ongoing projects, and the importance of translation in our modern world.

Q: What are some of the projects that you are working on?

A: I completed my master's degree here (at ASU) in 2019. For my master's thesis final project, I performed two song adaptations of William Blake’s "Echoing Green" and Percy Bysshe Shelley’s "My Soul Is an Enchanted Boat."

I'm currently working on my dissertation project, which is the textual translation of 46 poems in William Blake's "Songs of Innocence and of Experience" from English to Chinese. It is an edition that works toward transferring not only the semantic content but also the sound characteristics from the original verses to the target text.

I'm also drafting a special project for the Thousand Languages Project. This project delves into the poetry-music translation process that operates simultaneously at three distinct communicative levels — intersemiotic, interlingual, and intralingual, in Roman Jakobson’s terms — and explores the bonds and boundaries not only between poetry and music, but also between translation and adaptation through interpreting the latent and patent meanings of verbal expressions, experimenting with the acoustic features of verbal texts and transforming verbal messages into musical phrases.

What is translation to you?

I think translation is a good way to help you to understand the original texts. If you put an original text and a translation text in another language, there is no superior or subordinating (distinction) between the two texts.

It’s not that translation should be exactly the same as the source text, because it is boring, you know. When you look at a rose, you can see all these different petals, they have different gestures, different colors, and shapes. But what's most important is that the translation helps readers see the whole flower.

Is music a petal in your flower of translation?

Henry Wadsworth Longfellow said that “music is the universal language of mankind.”

It uses different kinds of signs and symbols to express the same meaning — and maybe sometimes even the original writer would not know all the meanings of these words.

Sometimes, something was discovered later by readers from different languages. They help to build a more holistic and panoramic view of the original texts. When you make a new translation, you are painting a new petal of the rose. You are not trying to imitate another petal or copy another exact flower.

Do you see melody in poetry?

Yes, because poetry and music have a lot of commonalities. Poetry is different from all the other written formats — poetry should always be read out loud. Sounds, I think, echo the meaning of the poem. So, if you only read the poems in silence, you cannot feel the sound pieces.

When you read out loud, you apprehend the meaning, but at the same time, you can feel the outer sounds coming out of your mouth, forming this kind of combination of rhythms, tone, and loudness of the words.

You can say it’s also music because music is a big concept.

When you read poetry, you can feel its internal rhythms and rhymes. I think it's not a very difficult process to try to put them into music. You just need to apply some melodies, some series of different notes, either from your guitar or from your piano, into the words and make some experiments with it.

There would be one moment when you feel that the combination of the words and the melodies was really good. When that moment came, you would capture and record that. That's the basic process of my composition.

For my own project, translating Blake's “Songs of Innocence and of Experience" into Chinese, besides the verbal and the written (content), I want to emphasize musicality in my translation. I think this was something that has been ignored in previous translations in Chinese. That's one more new update I add to my edition.

In my song adaptation of William Blake’s poem for my master’s thesis, you can notice that all these rhythmic patterns [between the poem and the song] are different. The meanings and emotions of the poem were mostly conveyed by sound. I also try to amplify some musical features. 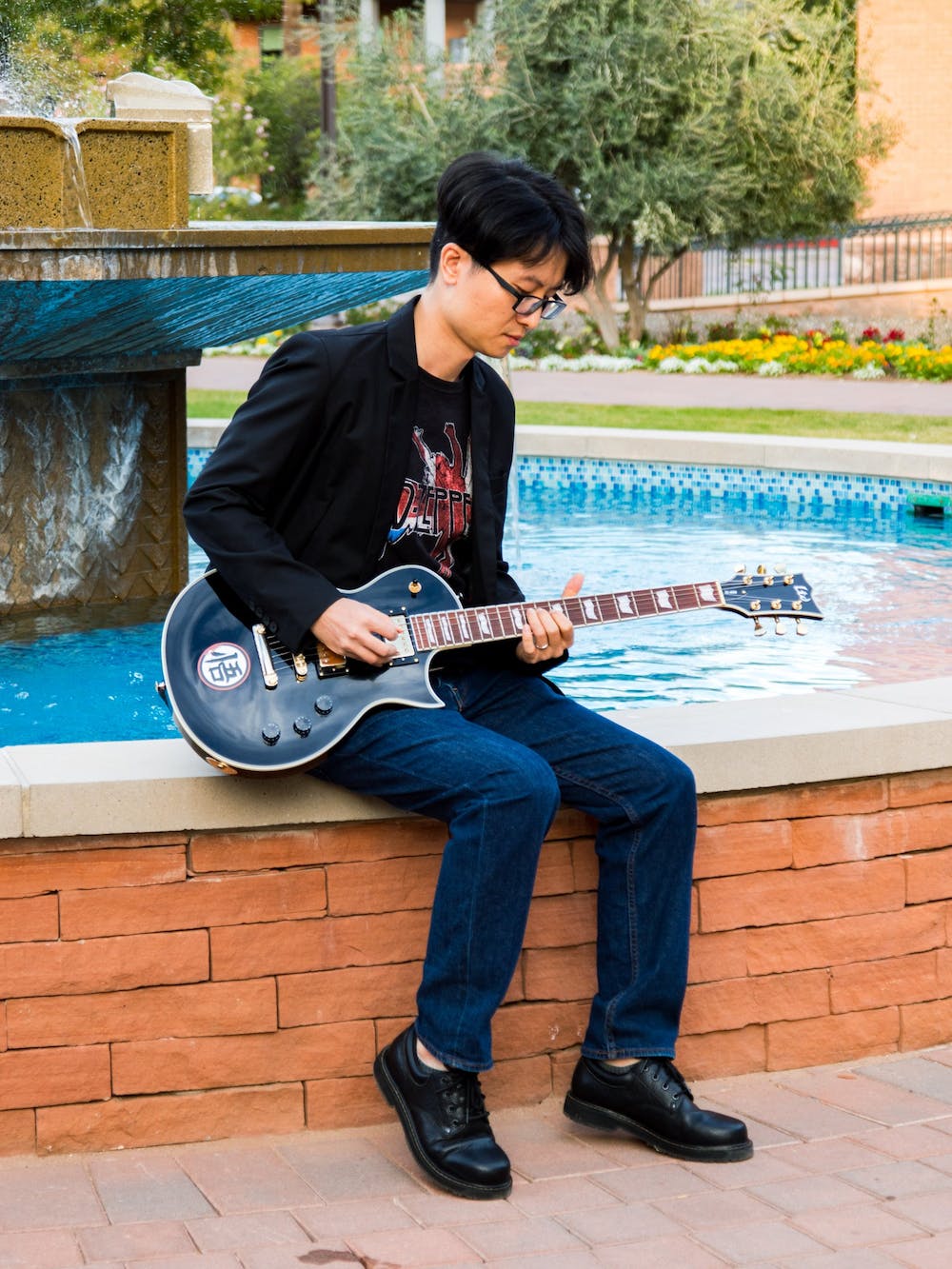 Zhongxing Zeng and his guitar, posed for a photo in front of the Old Main. 悟 (Wu) in Chinese means enlightenment.

What if readers cannot comprehend and appreciate the translation because the context is too foreign to them?

(Translating) Blake's poem is a process of foreignization, and that is basically my approach. I want to preserve the foreignness in Blake's verses. I do not want to do too much domestication or nativization to conform his work to Chinese. I want to keep the original. If Blake used seven or more syllables per line, I want to preserve that and resemble Blake's original lines. If I change (it) to 10 or 12 characters, it will do harm to the original. But if you do too much foreignization, the readers cannot resonate with the emotions in the original.

What is the most challenging part of translation?

When you finish one round of translation, you’ll have a lot of spots that you are not very satisfied with. Sometimes it can be your own rendition of the words, phrases, or syntax. When you do revisions, you always find something new. When you put the work aside for two weeks and then return to it, after two weeks you will find something better. It is a constant revision, and it takes time.

Normally, I will do three rounds of revision. But when there's a deadline you would be affected by the time limit to do the revision, that's something you also have to consider. If you want to make a satisfactory translation within the time limit before the deadline, you have to make some sacrifices.

Blake is an advocate of imagination and wishes. If you read his poems, you would actually feel quite extreme. It's like your mind is roaming with him into infinity, a vast expanse. It makes you feel free.

You use your own imagination, trying to understand these images and symbols, that's the attractive part of his poems. But some of his poems are also really hard to understand because he self-invented his own terms.

He didn't use regular or common terms. He invented his own system of semiotics, so it's really hard to understand his poems at first — you have to pack all the materials in.

Blake is different from his contemporaries, Neoclassical poets like Alexander Pope and John Dryden who empathize with rules and forms. Blake likes to experiment with new variations and irregularities; he is really ahead of his time.

Can you describe your voice in both translation and music?

When I was doing my own creation and composition, I had the full freedom to render these different elements — for example, my lyrics, my instrument arrangement, the way I sing my melodies, and how I will record myself during the production phase. But if I'm doing an adaptation or a translation, I have to be faithful to the (original) author and the readers, refusing my own perspective and moving on with the composition process.

What inspired you to write songs?

I am not a prolific songwriter as I only published two or three songs per year. The (songs) in Chinese mean a lot to me, (because) all those songs are related to my personal experience and all the places I have been to; a trip to the Grand Canyon: the sunset, the rain, the sunshine and the different shifting colors in the sky. A trip to Sedona: the red rocks.

They gave me instant inspiration and an emotional impression. After [the trips], I got back home and lay in bed before sleep. I had this reflection which pushed me to write about my experience. There was some kind of melody formed in my head, so I picked up the guitar and tried to record it. It is a natural process for me.

What is a favorite song of yours?

My own songs? Actually, I like (my) newest song, which I will record during the winter, “When you are old and I am gray.” As for my previous songs, I don’t really have a preference — they are like my children.

This interview has been edited for clarity and brevity and has been condensed from two conversations.