ASU students headed to the polls for the 2022 midterms

Students across ASU's campuses came out in person to vote in this year's crowded Arizona elections that will determine the next governor, the future of abortion rights and public education in the state.

At the Tempe campus polling location, in-person voting had been open since Thursday and began Tuesday at 6 a.m., with voters encountering long lines in the early afternoon. At both Tempe and the Downtown Phoenix campuses, politicians running for office made a final pitch to students for their support.

Election results are expected to begin rolling out about an hour after polls close, but it is likely to take days for competitive races to be called.

Positions like governor, secretary of state, attorney general, county attorney and senator are all on the ballot this year. Each race drew national attention, with former presidents Barack Obama and Donald Trump visiting the state to campaign for the candidates from their respective parties.

In the 2020 elections, over 2 million mail-in ballots were counted, but some students are voting in person in 2022. 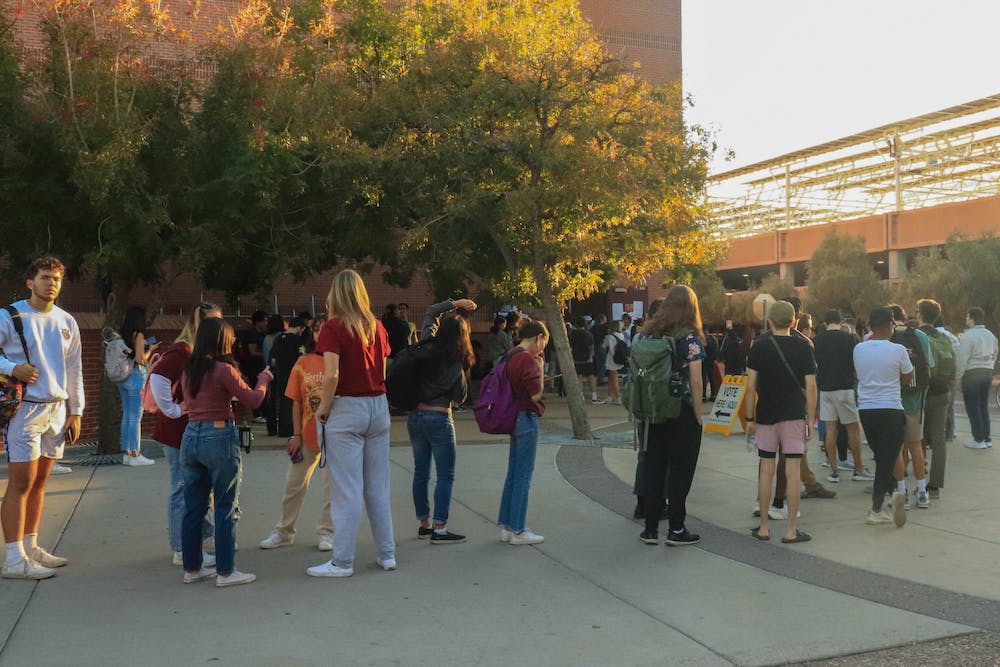 ASU students wait in line to vote in the 2022 midterms at the Sun Devil Fitness Complex Tempe on Tuesday, Nov. 8, 2022.

Madison Kosmatka, a senior studying speech and hearing science, was one of them. She said she arrived at the Tempe campus polling location to vote at around 6 p.m., and it took about an hour before she was able to do so.

Partisan student organizations have tabled on campus all semester and promoted candidates of their respective parties trying to get votes. Undergraduate Student Government has also worked to inform students about voter registration and about who is running and why.

Democratic gubernatorial candidate and Arizona Secretary of State officially until 2023 Katie Hobbs stopped by the Memorial Union on the Tempe campus midday Tuesday to speak with student groups, including Young Democrats at ASU and Mission for Arizona. Hobbs was joined by Superintendent of Public Instruction Kathy Hoffman, who seeks reelection, and democratic attorney general candidate Kris Mayes.

Hobbs urged students to vote and to tell their friends to do the same. She said the race was going to be close and "we cannot take a single vote for granted."

"(Students') vote is their voice in our government," Hobbs told The State Press. "And this election can really determine the future of democracy not just in Arizona, but in the country." 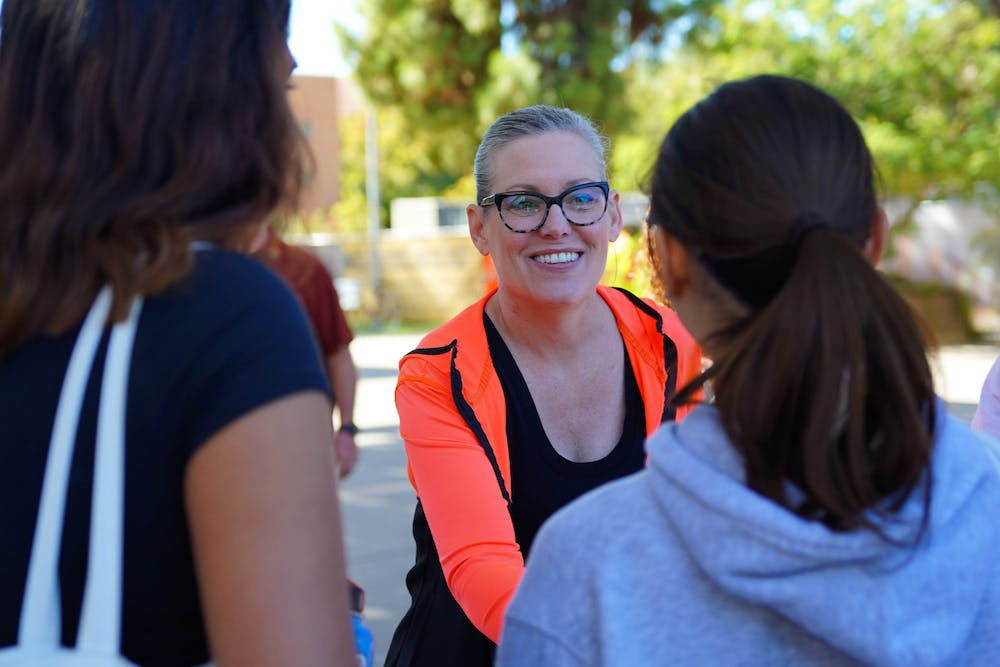 Democratic gubernatorial candidate Katie Hobbs speaks with students on campus outside of the Memorial Union, on Tuesday, Nov. 8, 2022, in Tempe.

For most student voters, voting was mostly about fulfilling their civic duty. Aayush Shah, a senior studying biomedical engineering, said issues like abortion rights and Proposition 209 are important, and having your voice heard is also crucial.

"Obviously just civic engagement, just exercising and showing what we want in the future," Shah said. "There's a lot of things that have gone wrong voting wise in my opinion in the last few years, so, (I'm) just putting my two cents in."

Proposition 209 would lower interest rates on medical debt if it passes. Arianna Herrera, a senior studying criminal justice, said it was one of the most important on the ballot this year.

"I feel like that's really important for families who have a lot of medical bills and stuff, which is out of their control," Herrera said.

For some other students, abortion rights are why they decided to vote. Elections for county attorney and attorney general are key for abortion rights, as people in those positions have the authority to enforce the reinstated abortion law from 1864, which bans abortion past 15 weeks except for cases of rape or incest.

"I'm pro-choice, or at least that's my stance," said Aileen Hammer, a sophomore studying mechanical engineering. "I consider that to be pretty relevant, especially with our state's current law on abortion, so that's what my guiding factor was."

Some students were thinking about the environment when filling out their ballots. Anthony Ramos, a senior studying accounting, is concerned about statewide water conservation.

"It's a massive issue that's happening in our state, and I don't think enough attention is being drawn to it," Ramos said. "Having cities like Flagstaff and the ones up there that don't have the big lakes that are actually starting to run completely out of water, and I don't think there's enough actual attention toward it, especially if you look at our lakes, they're dropping dramatically."

Other students were concerned about border security, like senior studying political science, Carl Hodgson, who does not want "soft-on-crime" politicians in office.

"I definitely think that we need to put in people who aren't going to vote for soft-on-crime policy for letting criminals back out of jail," Hodgson said. "I feel like you need to put people in office that promise to be tough on crime."

On the Downtown Phoenix campus, students went to the Post Office building to cast their ballots. 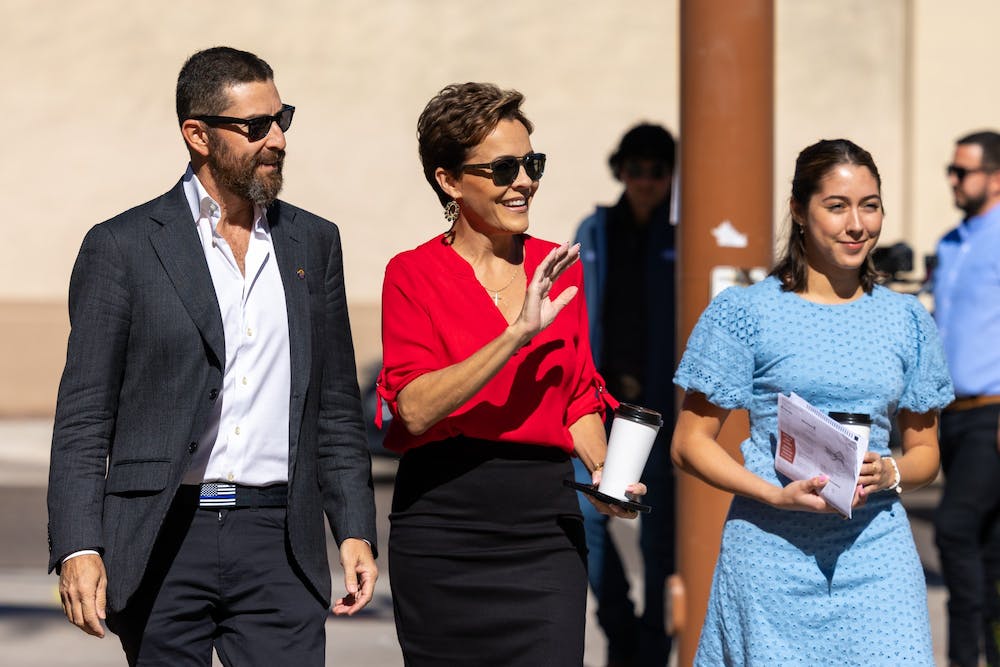 Proposition 308, that would allow Arizona student to pay in-state tuition if passed regardless of their immigration status, was an issue some students on the downtown campus focused on this year. Jennifer Salazar, a graduate student studying elementary education, felt the proposition had important implications.

"Using your voice is very important," Salazar said. "Especially with issues like the proposition for (Deferred Action for Childhood Arrivals) DACA students to qualify for in-state tuition."

Skyler Tuholsky, a coordinator at the Student Success Center Downtown, dropped off his mail-in ballot at the Downtown Phoenix campus polling location.

"I'm really passionate about Prop. 308," he said. "I think everyone should have access to higher education regardless of where they're born and so I really hope that goes through because I would love for more students to be at ASU."

When speaking about the limited voting problems around Maricopa County, Lake said, "We are going to reform elections and make sure that we have honest, transparent elections that every voter feels confident in."

Community and culture reporter Alyssa Bickle contributed to the reporting of this story.

Editor's note: This story was updated on Nov. 8 at 8 p.m. to include more student perspectives. It was updated again at 8:45 p.m. with additional photos.

Shane Brennan is a politics reporter at State Press. He also works for Cronkite News and Blaze Radio.