The men's basketball team lost to UCLA and USC, while the women's team fell short in the run for the territorial cup against UA

ASU men's basketball entered the weekend on a four-game winning streak with the opportunity to pick up two critical wins at home. Still, it came up short in both games, struggling to create offense with losses to UCLA 74-62 and USC 77-69.

The high-profile matchup against 5th-ranked UCLA on Thursday could have given the Sun Devils a share of first place in the Pac-12 standings.

The game remained close for its first 35 minutes, as smothering defense from both teams made it difficult for either squad to find points. A heave from fifth-year guard Desmond Cambridge Jr. as time expired gave ASU a 35-30 halftime lead, but UCLA began the second half on an 6-0 run to stifle any Sun Devil momentum.

360 DUNK❗️@dezcambridgejr pulling out all the tricks!

After ASU took a 60-58 point lead on sophomore guard Frankie Collins' 3-pointer with 6:13 remaining, UCLA’s offense came to life in the last five minutes of the game, and the Bruins finished on a 16-2 run to defeat ASU in Tempe 74-62.

A combination of early foul trouble and active defense from senior guard Devan Cambridge kept UCLA’s leading scorer of the season, senior guard and forward Jaime Jaquez Jr., to just two points on 1-3 shooting in the first half. Jaquez Jr. remained cold through the second half until he came alive to spark UCLA’s late run, where he scored or assisted on nine of UCLA’s final 16 points.

UCLA senior guard Tyger Campbell was essential for the Bruins throughout the game and seemed to make a big play every time ASU started to create momentum and activate the crowd. Campbell finished the game with 22 points on 7-11 from the field.

As Head Coach Bobby Hurley acknowledged in the post-game press conference, the contest was much closer than the final score indicated.

Hurley made sure to acknowledge the arena’s atmosphere after the game. Over 5,200 students were in attendance, shattering the all-time student attendance record for Desert Financial Arena.

“I got chills coming out for that game, seeing what the crowd looked like and the energy,” Hurley said.

ASU's struggles continued on Saturday night against the Trojans, despite a late surge and center transfer Warren Washington's best-scoring game of the season.

Junior guard DJ Horne opened the game with a lob to Washington, satisfying the roaring student section sporting "LOB U" T-shirts. However, that did not indicate what would come for the rest of the game as the Sun Devils struggled to find offensive currency coming off an emotional loss to UCLA on Thursday.

After the game, Head Coach Hurley took responsibility for the team's lack of “activity.”

“We just mentally didn’t have the right enthusiasm to play, and that's the coaches' responsibility to make sure that guys are playing frenetically, with great energy,” Hurley said. “We had four deflections at halftime. We had zero in the first six minutes of the second half. We had over 30 versus UCLA.”

Washington finished the game with 21 points and eight rebounds, five being offensive. Cambridge Jr. was the team's next leading scorer, contributing 17 points and 12 in the second half.

USC's 6-foot-9 fifth-year guard Drew Peterson controlled the Trojans' offensive tempo from tipoff. After the game, Hurley said the initial plan was for defensive standout Cambridge to take the responsibility of guarding Peterson. However, foul trouble prevented Cambridge from shadowing Peterson and having his usual impact on both sides of the floor.

USC fought to maintain their double-digit lead throughout the night, but the Sun Devils' persistent effort and energy eventually sparked a late run.

Around the four-minute mark, the Sun Devils, led by Washington, went on a 16-0 run in the final minutes, with Washington scoring 10 out of the 16 himself.

As Pac-12 conference play will only heat up from this point, the Sun Devils will need to utilize the momentum garnered from ending the USC game on a high note, to snap their second two-game losing streak of the season. They will travel to Washington next week to take on the Huskies on Thursday and Washington State on Sunday.

ASU women’s basketball took on their rival UA on Sunday but couldn't get the win after forfeiting two games last week, losing 80-67 to the Wildcats.

Neither team could find the net and capitalize on their shots until UA made a free throw. After UA made another jumper, ASU struggled to make critical shots. Freshman guard Trayanna Crisp made a jumper in the paint after two minutes with no points for ASU, scoring 14-8. Hunt followed with a 3-pointer.

UA fouled Simmons with almost two minutes left in the quarter, which allowed the Sun Devils to earn two free throws. With little time left to play, both teams slowed the ball down, but the Sun Devils had a different idea. Hunt made four good free throws to end the first quarter. UA was leading 20-16.

The Sun Devils had a slow start to the second quarter, and UA dominated the court. Junior guard Tyi Skinner revived the Sun Devils with a 3-pointer. ASU was earning several points from fouls, which remained true after Simmons and Skinner were fouled, allowing them to score four points, making the score 28-22.

The Sun Devils almost tied the half with a jumper from Skinner, a 3-pointer from Crisp, and a jumper from Simmons; however, UA held the lead. UA led 43-31 at the end of the half and was able to keep the lead in the 2nd half to finish off its win.

Women's basketball is looking to play Washington State University and the University of Washington, at home, on Jan. 27 and Jan. 29 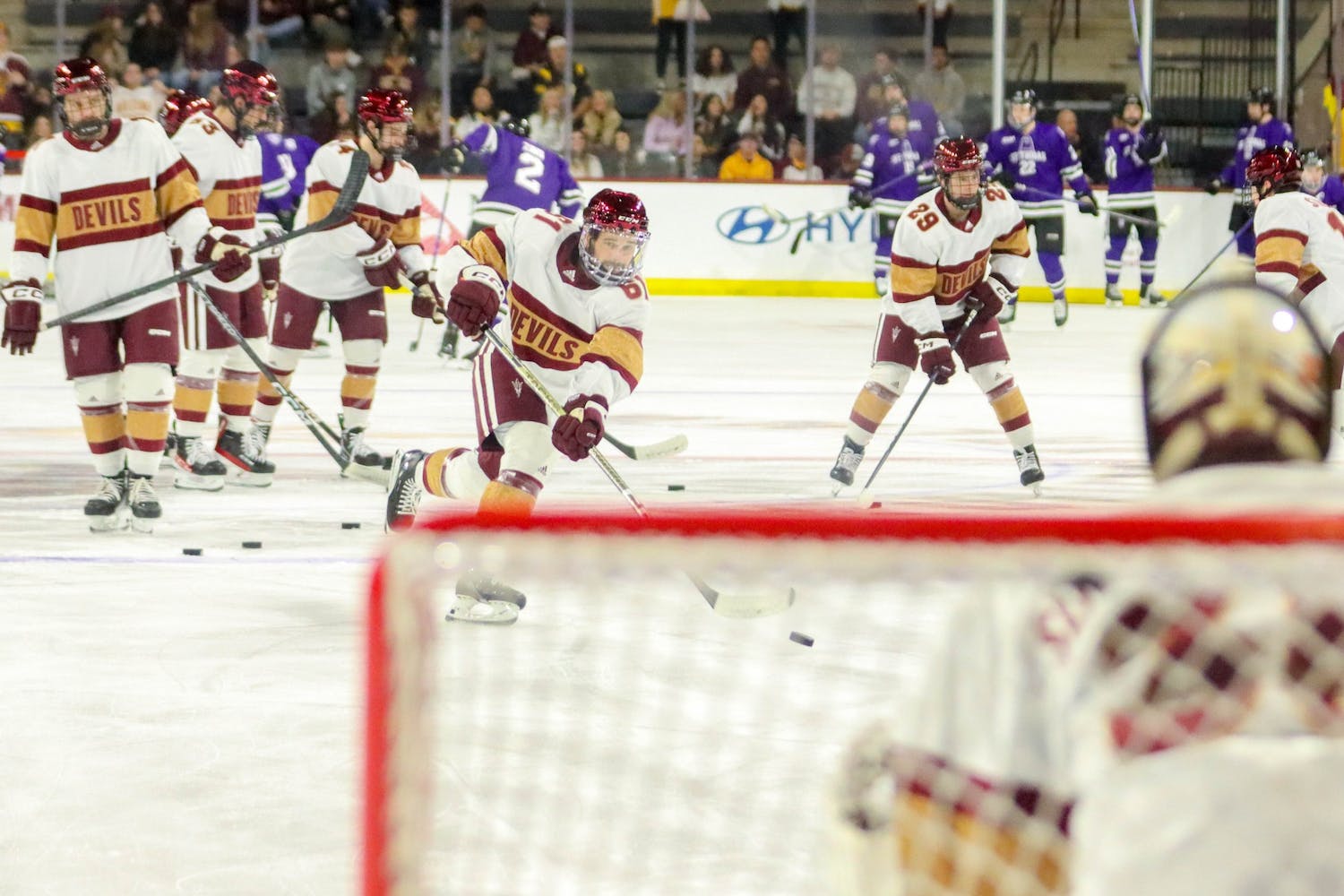