Davis leaves behind a legacy of leadership and love in Tempe.

For her entire life, Elisha Davis has always been on the move.

Whether she's playing basketball, showing off her dance moves or performing some combination of the two, Sun Devil fans know the senior point guard when they see her. Davis may be listed at 5-foot-3, but it's impossible to miss her presence on and off the court for No. 9 ASU women's basketball.

All that emotion, passion and fun-loving attitude showed up for Davis' senior day, where she danced her way through a tunnel of teammates with flowers in hand before showing off her best moves in front of the ASU crowd — finishing with a flair by attempting the splits. Davis' family watched on, laughing and smiling along with her.

But it wasn't always all smiles for Davis, who grew up in East Oakland, California, and was raised for a large part of her life by a single mother. Given the crime and lack of opportunities where they lived, Davis' mom made sure her daughter attended school far outside of their neighborhood — yet another example of Davis always being on the move.

In a story written by Jeff Metcalfe of azcentral sports, Davis detailed what it was like growing up with very little money in a rough part of the Bay Area, and said she never wanted to become a statistic. That mindset allowed Davis to flourish as a basketball player, earning a scholarship to play for the Sun Devils. At ASU, statistics continue to go by the wayside for Davis — you have to look beyond the numbers to truly understand her impact.

ASU head coach Charli Turner Thorne points to Davis's defense, conditioning and passing ability as attributes that stand out on the hardwood.

"To have a senior leader be that tough and that fit is pretty awesome," Turner Thorne said. "She is fantastic at finding the open player."

If you watch this Sun Devil team play, you can clearly see Davis flying around on defense and dribbling the ball furiously while finding her teammates on the offensive side. You can certainly hear Davis's impact too — in the form of squeaking shoes, clapping hands and loud vocalizations.

There's one enduring theme for Davis as a basketball player: devotion. That includes devotion to her teammates, her family, her friends and her schoolwork. Fitting the true definition of a "scholar baller," Davis finished her undergrad with a Bachelor's degree in communications — earning a 3.81 GPA in the process. She is currently working on her Master's.

Devoted is a word that describes Davis, but it doesn't tell the whole story. One minute she'll be celebrating a made free throw by hitting the dab with her teammates on the bench, and the next she'll come sprinting to the defense of her teammate on a hard foul — occasionally earning a technical in the process. With devotion comes emotion for a player that is constantly in motion. 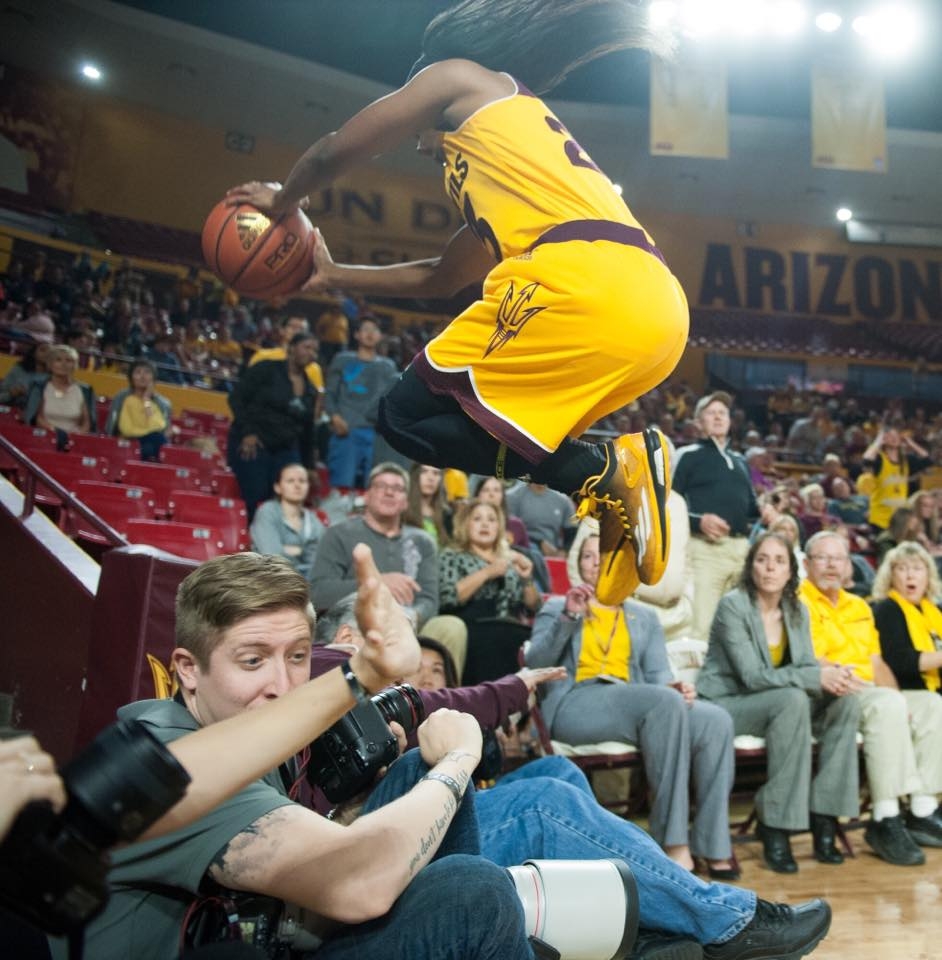 But above all else, Davis said that enjoying the moment is something that she's learned to do in her time at ASU.

"I've just become a better me," Davis said. "Anything that we do in life, we're gonna work as hard as we can, but we should never let that overshadow enjoying the process and all the experiences that come with it."

Davis's teammates undoubtedly enjoyed her presence in the locker room, but they'll particularly miss having someone like her running the show on offense. Senior guard Katie Hempen, ASU's all-time leader in three-pointers made, agreed with Turner Thorne about Davis' ability to find people.

After Hempen broke the school record, she said, "I have to give a lot of credit to my teammates — thanks guys" to which Davis, who was sitting right next to her, replied with a pat on the back and whispered "you're welcome."

For anyone on this ASU team, it must have been nice to have a fighter like Davis in their corner.