On June 12, nine ASU students from the Pi Kappa Phi fraternity set out on a journey across the country in the hopes of raising funds and awareness for individuals with disabilities.

As a part of the fraternity’s Journey of Hope event, 81 cyclists from its chapters throughout the United States set out on this annual expedition to raise $650,000 for individuals with disabilities.

“I really like pushing myself and seeing if I can do challenges that are bigger than myself, so when I heard that there was an opportunity through Pi Kappa Phi to make a difference in people’s lives and to do something that a lot of people don’t get the chance to do, I wanted to jump at the chance to do it,” Drew Cring, Journey of Hope participant and exercise science and health promotion senior, said. 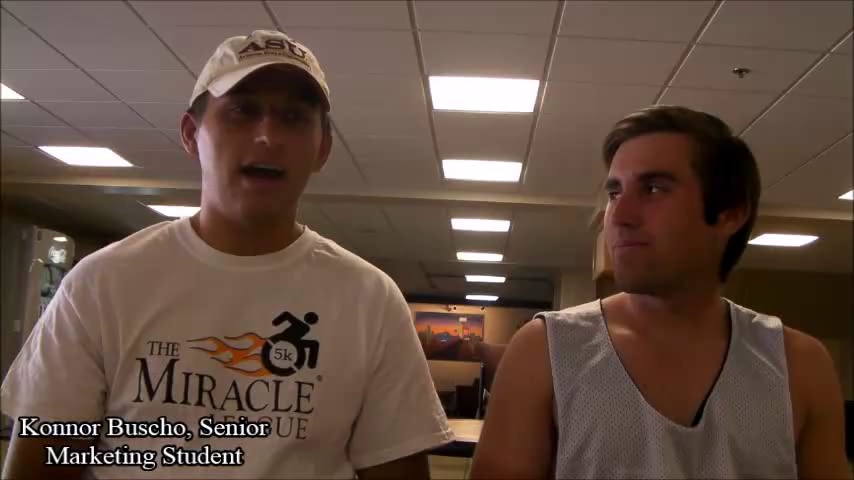 The event was organized by the Ability Experience, Pi Kappa Phi’s nonprofit organization, and participants had to raise at least $5,500 beforehand in order to participate.

The cyclists rode an average of about 75 miles each day over the course of the 67-day trip, and stopped in various cities for “Friendship Visits” with individuals with disabilities, according to Cring.

During these “Friendship Visits,” the Pi Kappa Phis were often treated to welcoming parties, where they let loose by bowling, having dance parties or engaging in other such diversions, Cring said.

“I had to do a lot of training,” he said. “Luckily, we had a lot of opportunities with brothers to go out and train in the desert, so I did about one thousand miles beforehand of training. That’s nothing compared to what we do everyday though.”

Participants were divided into three different routes, although all began on the west coast and will finished in Washington D.C. on Aug. 13.

Each night, participants slept on air mattresses in community-sponsored housing, such as gyms and churches, and ate meals sponsored by donors or communities.

Although the journey presented the inherent challenge of biking for long distances each day, Cring said living on the road was challenging for other reasons as well, such as being unable to do laundry.

Still, the Journey of Hope participants found a way to carry on.

“I don’t really quit when I’m on the bike. I always remind myself of why I’m riding,” he said.

During long and challenging rides, Cring said he thought about some of the people the group visited who did not have the ability to ride a bicycle.

As an exercise science and health promotion student, Cring said the Journey of Hope offered him a chance to work with the other cyclists and monitor their nutrition and stretching habits.

Still, the most rewarding part of his journey, he said, was the connections he has been able to build with others.

“You realize that you’re in something way bigger than yourself, that you’re making a difference for these kids,” Cring said.

“This organization isn’t like every other fraternity,” Miller said. “It’s hard to find groups of guys that are this young and have this mentality about the world.”

Miller explained that his fraternity brothers genuinely care about others and hope to make a positive impact on the community around them.

“I didn’t think I was ever going to rush them, but I don’t know what my life would be like without them,” he said.

For Miller, the physical demands of the journey were most challenging.

“Cycling was something I had never done before and never thought I was going to get involved with,” Miller said, explaining that philanthropy was the driving motivation behind his decision to go on the Journey of Hope.

“Even though it is really physically taxing, cycling is a lot of your mind telling you what you can and can’t do,” he added.

Miller, like Cring, said he thought back to the individuals who would benefit from their work in order to motivate himself to continue cycling.

“You think about all the people you’ve met along the way, all the connections you’ve built,” Miller said.

An important part of the Ability Experience's mission is raising awareness for the disability community, in addition to its fundraising.

“I’ve definitely realized that something the disabled community doesn’t really have a lot of is exposure and a voice to the public,” Miller said.

He hopes to change this after he graduates from ASU by using journalism to bring more awareness to this community.

Senior marketing student Konnor Buscho said he decided to join Pi Kappa Phi after seeing the great work his older brother was able to do in the fraternity.

Cring, Miller and Buscho all agree that the transition back into their normal lives has been interesting, as they became assimilated to their Journey of Hope lifestyle and the surreal experience is hard to describe.

"It feels like I just woke up and none of what happened even happened," Buscho said.

Buscho said this journey gave him the opportunity to realize how fortunate he is, and plans on sharing his experience with the other members of the fraternity.

Pi Kappa Phi's ASU chapter was chartered in 2007, and has since had more than 90 members participate in similar summer events for the Ability Experience, he said.

"I think it serves as a reminder throughout the future to definitely be doing these things, maybe not on a very frequent basis, but on a regular basis," Buscho said.

The fraternity plans to host at least one philanthropic event each semester this academic year, in addition to the "Friendship Visits," they already do with the nonprofit organization Best Buddies Arizona.

“If you make somebody feel like they matter in your life, you’ll have them for the rest of your life," Buscho said.