People always tell you not to judge a book by its cover, but if you do, hopefully it's a pretty one. ASU club A Buncha Book Artists is striving to redefine traditional book-making as a creative art form.

The club began in fall 2000, launched by advisor Dan Mayer to provide ASU students interested in creating art through books a place to further explore their ambitions.

Sean Gallagher, photography senior and treasurer of ABBA, said the books themselves don't have generic covers. Some book forms are folded, some require sewing, some are traditionally bound and expand on the typical book found in any given bookstore.

“I’ve made several books that were just boxes of loose-leaf pages,” Gallagher said. “There are three-dimensional ways of making books. There was a tunnel book in the Vamp & Tramp show, which is a book with a hole and the pages are on the outside.” 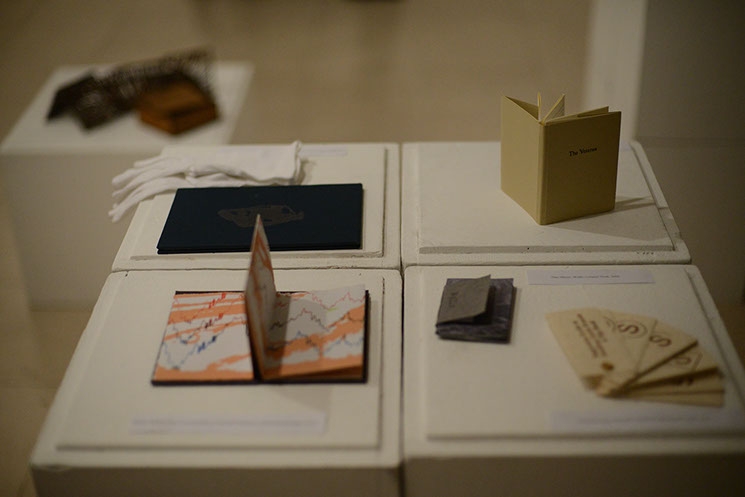 ABBA educates students in the traditional book-making techniques like letterpress and allows students to lead workshops with their own ideas.

Workshops the club hosts focus on book structures and forms, teaching students how books can be put together in various ways. Many workshops consist of students sharing their own techniques with peers, whereas others are led by professionals like Jessica Spring, a letter press artist.

While the club educates ASU students on the variety of book forms through hands-on experiences, the genre of art expands past ASU. ABBA sends students around the country to conferences and workshops like Southern Graphics Council International and San Francisco Center for the Book.

The conferences focus on the variety of art forms the genre has. Gallagher said talking with other artists about projects they are working on has introduced him to new book forms.

“There’s a variety of different things you can do with book arts that it’s really wide open,” Gallagher said. “That attracted me to it.”

Hailey Tang, junior graphic design major and president of ABBA, said the club goes outside the traditions of book-making and takes the field in a new direction.

“It’s an artists’ book club, so our definition and our process of making a book is really open to interpretation, and it’s encouraged in fact,” Tang said. “As a design major, a lot of work that I produce is digital. Once I found A Buncha Book Artists, I realized there are different ways of telling stories and making art in a physical form that can be really beautiful.”

“When I found ABBA, it was really nice because it was a lot of people who knew what they wanted to do with their art, and if they didn’t, they were very open to discussing art history or current art events,” Fresquez said. “It was a good niche to find.”

As digital books have become a part of modern culture, sales of physical books have dropped significantly. However, ABBA encourages new forms of books, both physical and digital, in an attempt to produce an appreciation for both.

“The most amazing thing that I’ve seen is definitely the new and the old melding together because it’s definitely a traditional art,” Fresquez said. “But now in today’s contemporary art, it’s a very experimental art form, and so there are people of very different age groups who are just bonding so much over technique and just finding their work.”