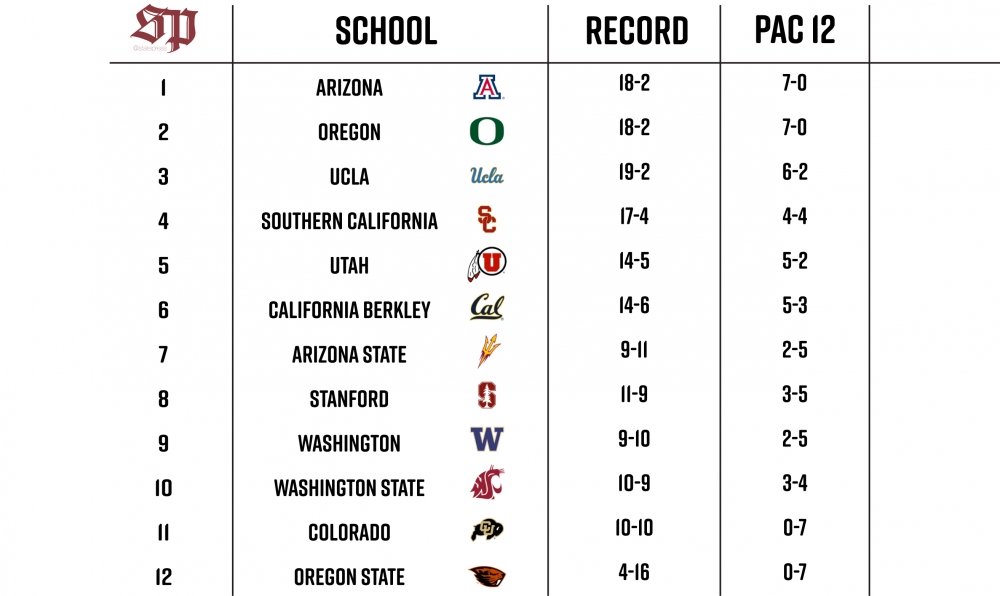 The already loaded Wildcats just got better now that sophomore guard Allonzo Trier is back in the lineup after his PED suspension. A sweep in Los Angeles propelled Arizona inside the top 10 in the nation this week with another premier matchup against Oregon coming in a couple weeks.

Speaking of the Ducks, they haven't lost since Nov. 21 to Georgetown in Maui. Oregon's 16-game win streak is the second longest in the country for a power conference team, behind only Kansas. While dealing with adversity, the Ducks just keep winning.

The Bruins have played like a Final Four team, but were overmatched at Pauley Pavilion by a surging Arizona squad. UCLA's only two losses have come in conference, showing how good the top of the Pac-12 is this season.

The Trojans hung on in a tight win over ASU Sunday, nearly blowing a 14-point lead in under three minutes at Galen Center. USC has slowed since its dominating start, but junior guards Jordan McLaughlin and Elijah Stewart have helped bridge the gap until sophomore Bennie Boatwright can return to action.

Quietly, the Utes are having a pretty good year. Four of their five losses have come at the hands of ranked teams. Utah is fundamentally sound, rarely making critical errors. Without Jakob Poeltl, there were questions about if the Utes could maintain their level but they've answered them.

The Golden Bears have flown under the radar, likely due to playing how they were projected to. Cal has taken care of business against teams they should beat and faltered against teams they were expected to falter against. Stay the course and an NCAA Tournament bid could be in Cal's future.

The Sun Devils just completed the hardest three-game stretch of any Pac-12 team's conference season with games in Tucson and Los Angeles and have lost four in a row. Thankfully, the schedule eases up with three of ASU's next four games coming against the bottomfeeders of the conference.

The Cardinal sit in a precarious position of being decidedly average all over the court. Stanford has few standouts but can do just enough to win games, as opposed to the rest of the bottom of the conference, who are exceptional in one area or exceptionally bad everywhere.

The only thing keeping the Huskies from the basement of the conference is potential lottery pick freshman guard Markelle Fultz. Fourth in the nation in scoring, Fultz averages 23.4 points per game and has scored 30 or more in his last three games. Next up is ASU, with one of the worst defenses in the nation.

Josh Hawkinson is once again a one-man show for the Cougars, who snapped a four-game skid Saturday. Wazzu is essentially irrelevant to the future of the Pac-12, which is a shame when Hawkinson has been one of the more consistent assets on any team.

The Buffaloes are still winless in conference play after a 10-3 start to the year. That's not to say Colorado hasn't been competitive, though. Their last two losses have come in overtime and losses to USC and ASU came down to the final possession.

To put it lightly, the Beavers are not having a good year. The only team over .500 that Oregon State has a win over is 10-9 MAC team Kent State, and the Beavers are losing by an average of six points per game.