By the numbers: How ASU students pick their major

With 423 majors, ASU students have many options to choose from

Just fifteen years ago at ASU, all freshmen were undeclared – taking general exploratory courses for two years then applying to the program of their choice.

But much has changed since President Michael Crow’s 2002 arrival.

The University’s shift from No. 1 party school to No. 1 in innovation could be attributed to an emphasis on the individual colleges – students now apply to their desired program freshman year and live and learn with those same students. That means students are selecting majors earlier.

Selecting one of 423 majors ASU offers online and at five different campuses can be difficult, especially when it determines your identity. Most students switch, but there are resources to narrow down choices once they are on campus. 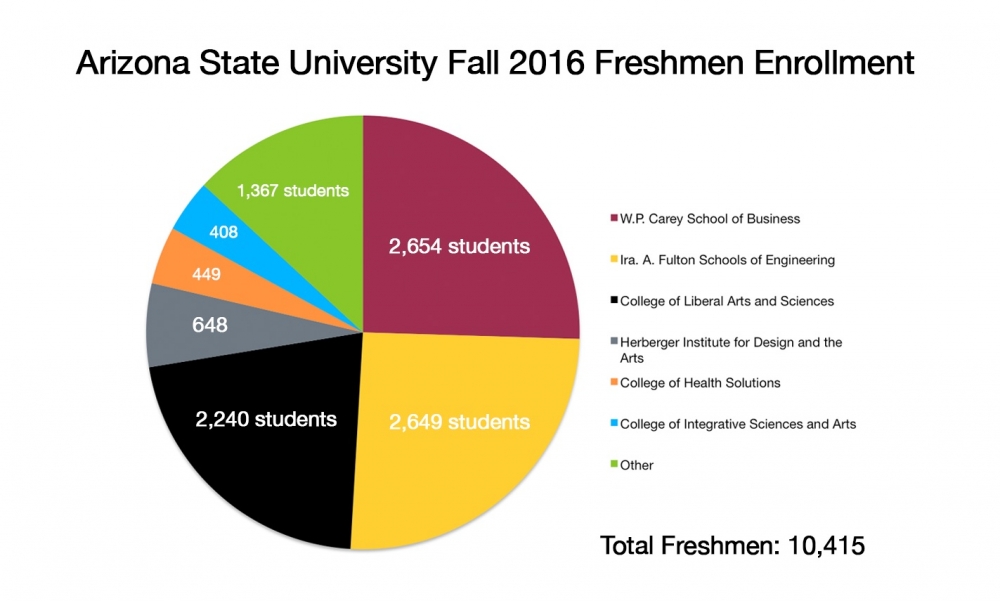 But for many students who choose wrong, they may be socially, financially and academically disadvantaged.

Scott Colbeck, a chemical engineering freshman, started at the Ira A. Fulton Schools of Engineering last fall as a biomedical engineering student. After taking several introductory courses, he found chemistry more interesting, and worked with his adviser to switch.

“When I was in biomedical engineering, it was this kind of ebb and flow,” Colbeck said. “I felt really good about it and then there’s times when I thought it was wrong for me and I was just oscillating too much. Then finally I decided to change my major and haven’t looked back since.”

As a freshman with few credits, Colbeck changed his major to another in the same school rather seamlessly, but depending on circumstances, the process can differ.

Around 70 percent of freshmen at ASU change their major at least once over four years compared to the national average of 80 percent, according to the National Center for Education Statistics.

ASU has 17 different schools, colleges and institutes, and many first-time freshmen are admitted to certain programs, but still unsure of exactly what they want to do.

“More and more students are uncertain, and I think that’s partly a reflection of the fact we now have so many more majors than we used to,” said Tim Desch, assistant dean for W.P. Carey School of Business undergraduate programs admissions.

Desch said W.P. Carey alone added 23 majors over the past 10 years, including technological entrepreneurship management and both Chinese and Spanish language culture and business.

At the Fulton Schools, students must chose from 24 different engineering majors, but they’re granted exploration time, as most colleges encourage during the first one or two semesters.

But engineering requires demanding perquisites and, according to Helm, many students switch majors due to rigor. They tend to change out of the Fulton Schools to get other degrees with the same end goal in mind, but not an engineering focus.

All 423 different majors make this possible, giving students the ability to waver, as expected.

Robert Monahan, assistant director of first-year programs at the College of Integrative Sciences and Arts said exploratory students at ASU change their major less frequently than those beginning in any other program.

“We have lots of majors because we study lots of things, and in the end that’s good,” Monahan said. “The number 423 is really confusing, but no one is really picking one major out of that haystack.”

His advice to students is to pick a major that genuinely interests them.

“Even if you’re not sure where it will lead you career wise, it’s best to start with an interest that will engage your curiosity and get you to think about the world in new ways,” Monahan said.

“You can apply any major to the work world no matter what you hear,” he said. “It takes creativity in many cases, but it can be done. If you take the right steps to get experience through internships, jobs, networking, talking with professors and friends and family, you’ll find a place to apply what you’ve learned.”