Thirteen years later, an independent student media is more important than ever

The magazine cover was black and white. In the center, scrawled in cursive script, was the cover story’s title: “Sensual Steel.” Behind the script was the side profile of a female breast, a nipple pierced with a barbell. The photo was paired with an article on extreme body modifications. The response to the photo was similarly extreme.

State Press Magazine published “Sensual Steel” and its accompanying photo in 2004, a decision that set off a controversy that would come to be known as “Nipplegate.” 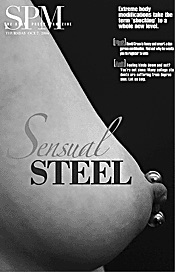 After the magazine’s publication, The State Press received complaints that argued the photo was inappropriate.

The State Press didn't publish the photo because it wanted to spark controversy. The article did not focus on ear piercings or nose piercings – it focused on extreme body modifications. The photo was chosen because the editorial board decided that it adequately represented the story while at the same time was not too explicit for a print magazine directed at a college audience.

As journalists, we must cover communities different than our own. The photo may have made some uncomfortable because it was different than what they were used to. But if we don’t represent diversity, we have failed our audience.

The State Press believes that an independent student media is integral to ensure accountability, accuracy and truth. We are thankful for our ability to remain independent and are committed to defending that ability steadfastly.

Every publication faces criticism from readers. When we face criticism, we do so with confidence in our editorial process.

A few weeks after the magazine was published, Cameron Eickmeyer, The State Press editor-in-chief at the time, said he was called into a meeting by the University administration to discuss the photo. The meeting was called by then-Vice President of Student Affairs Juan Gonzalez and included the magazine editor as well as Dean Kristin Gilger, a student media adviser.

“At that meeting, (Gonzalez) told us that he was very displeased, that there was a donor who was upset — we learned that was Ira Fulton — and he said very directly, essentially, that if we didn’t change, or if we made a similar decision in the future, then we would be looking at an ‘exit strategy,’” Eickmeyer said.

Michael Crow, who has served as ASU president since 2002, said that the administration’s response was linked to an agreed upon the advertising policy.

The Phoenix New Times reported that the administration was upset that the paper’s editorial policy did not follow its advertising policy, which charged the board with reviewing the “decency” of ads before publishing them.

Crow said the university was concerned with publishing ads for businesses like strip clubs in a magazine bearing ASU’s name.

“We can’t take the university’s name ... and do something that wouldn’t be done at the Arizona Republic, the Wall Street Journal or the Washington Post,” Crow said in an interview with State Press editors on March 2, 2017.

Crow maintained that any issues with content published in the magazine were based on revenue and advertising rather than editorial content.

James Rund, now senior vice president of Educational Outreach and Student Services, said the incident was an opportunity to “self-correct” the fact that the paper’s business model was not aligned with its purpose.

“We had a discussion about the editorial freedom of a college newspaper,” she said. “I don’t remember this story being tied to advertising decisions … although we were talking about advertising issues during that period.”

Inside Reporting, a journalism textbook by Tim Harrower taught in Cronkite classes, uses the controversy in its chapter on law and ethics.

“The president, in response, tried to intimidate the student paper — even threatening, through a subordinate, to cut off funding and ‘kick The State Press off campus,’” the textbook says.

The State Press works hard to support itself financially. Our partnership with ASU allows us remain editorially independent while still working with the university to receive resources such as space for our newsrooms. We collaborate with the university on projects such as the Off Campus Student Housing Guide to raise revenue through Student Media.

“It was a trying time, but I think what came out of it was a good thing,” Gilger said. “It’s important to show the public that you have a deliberative process.”

For its response to this controversy, The State Press won a Payne Ethics Award from the University of Oregon.

“I would say that the (award) was not necessarily for the content itself, but it was more for the process by which we came to this decision. So we had our editorial budget meeting, we debated the pros and cons, we decided as young journalists what we thought was the best course of action at the time," Eickmeyer said.

The student media process has continued to defend itself against threats. Last October, Barrett censored a piece of artwork depicting a nude female body from Normal Noise, a publication funded by the school, because it was deemed as inappropriate.

We believe this response contradicts our core beliefs as journalists. College campuses ought to be the place to freely express creativity and ideas. If there is no safe, public outlet to do so, then ASU is failing to serve its students.

This is why the editorial board responded the way it did 13 years ago when its editorial freedom was threatened and why its response is one we continue to find value in revisiting.

As students, the University has an enormous amount of control over our everyday lives. Student journalists play a critical role in informing other students and holding our institutions accountable.

When institutions try to control journalists, they become less fair, less transparent and less democratic. The First Amendment protects freedoms of speech and press, and its protections should not end when we step foot on campus.

This violation of these First Amendment rights is widespread, and we continue to see examples of it within our state as well as on a national level.

In 2009, the student publication at Thunderbird High School had an article about teachers’ opinions on standardized testing pulled by the principal. After a lengthy legal battle and seeking advice from Cronkite, the newspaper won the right to publish the article.

“That was an important lesson in students sticking to their guns and holding their institutions accountable,” Gilger said.

Currently, the Arizona Legislature is considering a bill that would provide new freedoms to student publications. SB 1384 would protect student journalists’ rights to freedom of speech even when their publications are funded by their schools or produced in a classroom setting.

Good reporting will inevitably upset someone. Yet as conflicts continue to arise, it is our duty as journalists to represent the voice of the students in the best way possible, whether that method is deemed controversial or not.

Journalistic freedom is crucial for campus media and must be preserved. It’s also something Crow and the ASU administration has placed a value on.

“The fourth estate and the operation of a democracy at a national level, the local level, the university level is absolutely essential to the discourse within the democratic republic about public events,” Crow said. “I’ve never had one second in almost 15 years of concern about the newspaper.”

Compared to some other student publications, The State Press is lucky – the ASU administration has largely chosen to respect our independence and support our purpose. Other publications, like the Kentucky Kernel, which was recently sued by its university, have not been so fortunate.

Still, we hesitate to characterize ourselves as lucky or fortunate. Because while we are glad that our university has given us editorial independence, we believe such independence ought to be a right for all student publications under the First Amendment.

Of course, The State Press’s coverage of the university is not always strictly beneficial for the administration. In the past year, we’ve investigated student cheating rings, we’ve delved into a campus church that has been called cult-like by former members, we've covered an ASU student accusing the administration of racial profiling and we've covered the contentious and unpredictable nature of USG elections.

It’s not always an easy relationship, but it is, without a doubt, an important one.

Keep letters under 500 words and be sure to include your university affiliation. Anonymity will not be granted.