U.S. Senator John McCain was the first in a string of Arizona lawmakers to discuss cybersecurity issues Wednesday in a keynote speech at an ASU-hosted congressional conference.

McCain addressed a room of researchers and military officials as well as other industry experts on ASU's Polytechnic campus, calling on them to bring qualified people together to combat threats such as election interference, ASU spokeswoman Leslie Minton said.

“Arizona State University has taken the lead in academia, making a commitment to dramatically increase the output of cyber-qualified graduates," McCain said according to his office. "ASU’s leadership is critical to solving the number one challenge across the cybersecurity landscape—the need for a trained and capable workforce for both government and industry."

Education was central in many of the panels.

"Cyber-trained graduates lead the growth of our economy by strengthening our state’s strong defense sector and contributing to federal research," McCain said.

McCain is included in a bipartisan group of Arizona lawmakers, as well as ASU officials, who took part in the day-long conference focusing primarily on cybersecurity issues.

"The goal for this conference was to get a majority of our congressional delegation focused on an area of increasing priority at ASU, and that's cyber security," said Shay Stautz, ASU's associate vice president of national policy.

Stautz assembled today's panel to integrate the University's many efforts in cybersecurity with Arizona's legislative and educational powers.

"From the perspective of training the workforce of tomorrow, we want to focus on our students," Stautz said.

Raghu Santanam, a professor of information systems at W.P. Carey School of Business, is an integral part to achieving this mission. Santanam shares Stautz's interest in educating the next generation about the importance of cybersecurity.

Santanam said the business schools and other partners in the cybersecurity initiative are "working together to put together this curriculum that helps students from business, from engineering, from the West campus get a more interdisciplinary perspective on cybersecurity."

Preparing for the future doesn't pertain only to college-age students, however. ASU's efforts to teach cybersecurity have even trickled down into programs geared toward youth. 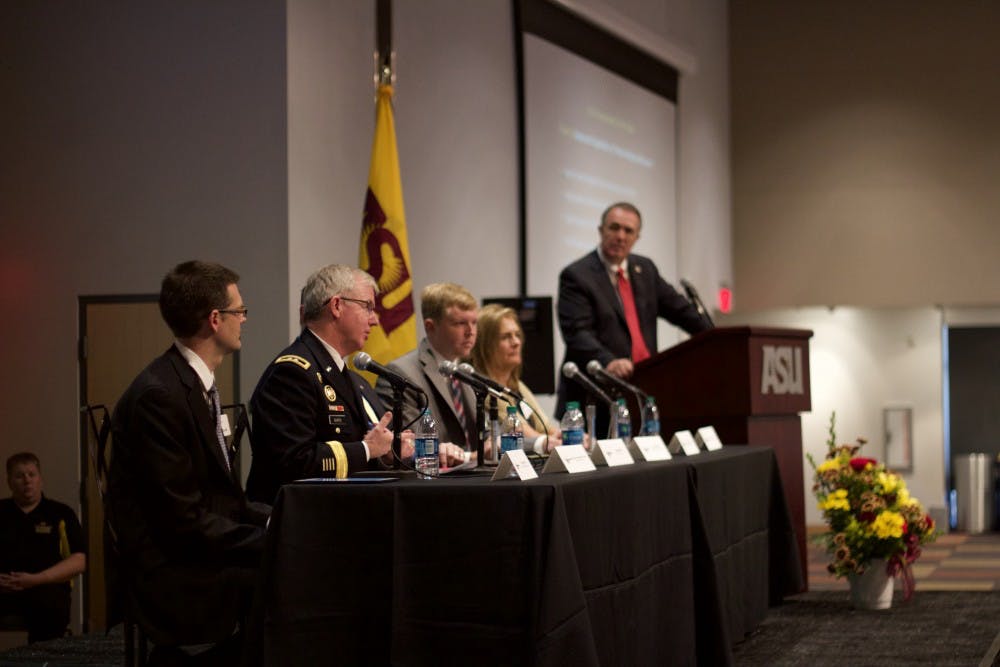 Rep. Trent Franks leads a panel on cybersecurity in a conference at the ASU Polytechnic campus in Mesa on Wednesday, August 23.

"You have to out reach, of course, to middle schools," Santanam said. "And we were mentioning about our camps and other initiatives of outreach to schools in Phoenix, and how that's helping them get prepared for a technology career in a world that's technology intensive."

While McCain focused on election interference in light of allegations of Russian meddling in the 2016 presidential election, Arizona representatives Kyrsten Sinema and Andy Biggs co-moderated a panel on supplying education and filling jobs within the cybersecurity industry.