Police flooded the streets of downtown Phoenix with tear gas and pepper balls Tuesday night as Trump supporters and protesters met outside of President Donald Trump's rally, though the extent of any violence is unknown.

"(Tear gas) was just everywhere," said Alexandra Beeton, an English literature senior. "There was no avoiding it."

Beeton said she saw someone throwing a water bottle at police, which other news outlets have reported as the reason police deployed tear gas. She criticized the police for responding the way they did.

"It doesn’t seem like you should punish an entire crowd of people with health issues just because one person threw a water bottle," she said. "Especially during a largely peaceful protest, we didn’t see anyone being unpeaceful or disrespectful."

A spokeswoman from the Phoenix Police Department said in an email that police "are actively working to contain a few individuals that are involved in criminal behavior."

Four arrests were made after the rally, two of which were a result of assault on police officers, according to the Phoenix Police Department in a press conference after the rally. 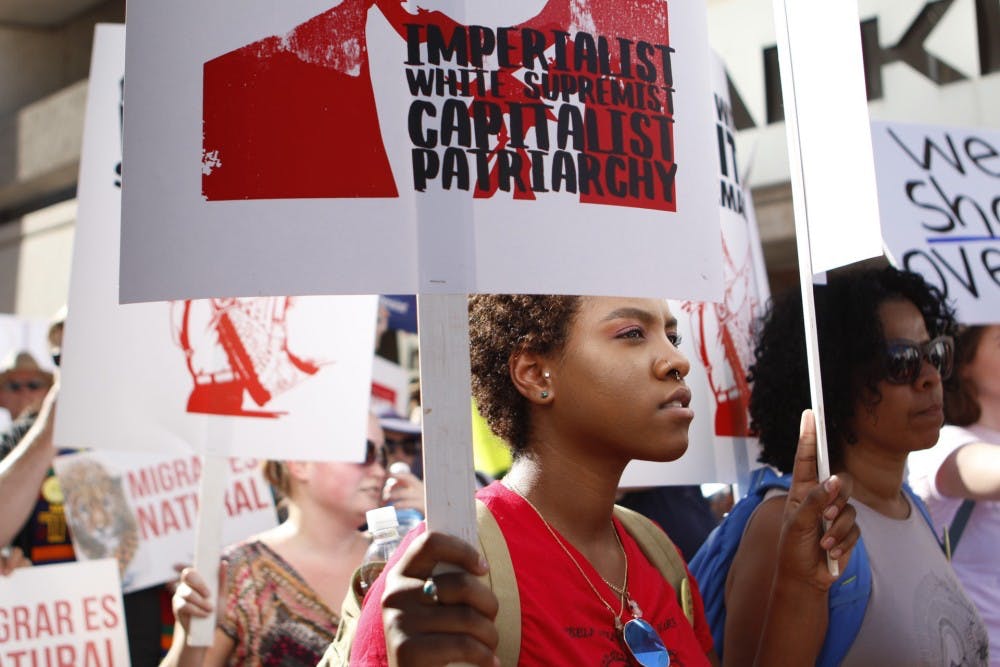 A protestor marches down Monroe Street before the Trump Rally in Phoenix, Arizona on Tuesday, Aug. 22, 2017.

The chaos outside the Phoenix Convention Center contrasted the scene a few hours before, when many ASU students turned out to express their political opinions — some to support the president, others to show their resistance and some just to watch.

"I’m here to see the Trump rally," said automotive engineering sophomore JonPaul Rowe before the president took the stage. Trump went on to deliver a winding address to rally his base and criticize the media and other political opponents. "This will be my first time seeing President Trump in person. We want to come out here and support our other patriots and support the president himself."

Just before the rally began, ASU President Michael Crow was on the University's downtown Phoenix campus and said everything was "going fine."

Tuesday's rally closely followed a complicated week, in what has been a tumultuous political year.

Last weekend, violence broke out at a white nationalist rally in Charlottesville, Virginia, leaving one dead and many more injured.

The president's relationship with minority communities, his controversial immigration policy and his potential pardon of the equally controversial former Maricopa County Sheriff Joe Arpaio — which Trump suggested was a possibility during his rally —  made apparent the rawness of the wounds from Charlottesville on Tuesday night.

"I’m protesting his negativity towards race," said Carlos Reynoso, a health and wellness sophomore who took to the streets in opposition to the president. "Just because what he says is his right, it doesn’t mean that I have to like it." 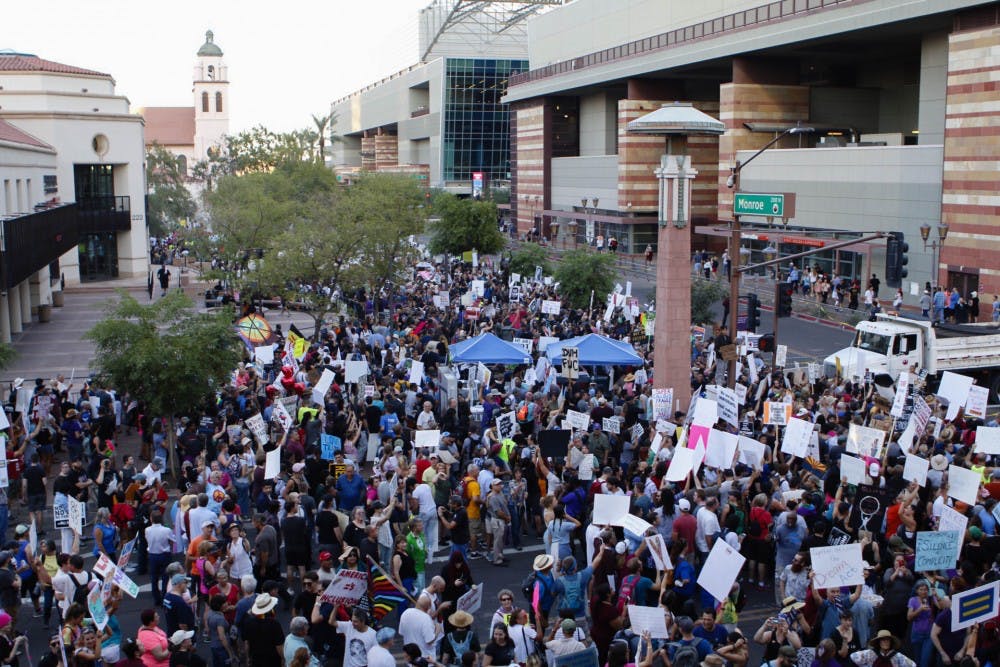 Protestors crowd the streets of downtown Phoenix while the Trump rally takes place inside the Phoenix Convention Center in Phoenix, Arizona on Tuesday, Aug. 22, 2017.

Reynoso, a child of immigrants, said he opposed the president's plan to erect a wall on the Mexican border and criticized his rhetoric on race.

"This is the land of the free, home of the brave, land of opportunity," he said. "Isn’t that the foundation we were founded upon? And if we don’t have the opportunity, what does it leave us?"

Even Republican supporters in the crowds outside the convention center acknowledged that tensions were high.

"To be fair, I don’t think it’s probably the best timing," said Franklin Lee, a construction management senior. "I think he probably should have waited a little bit. But he’s sticking to his guns."

However, Trump proponents like Rowe viewed the rally in the opposite light.

"I feel like it’s important now more than ever," he said. "We need to come together as one and realize that racism is actually not something that we can hide behind, and I think it’s important that people including the media and on the left realize that we’re not racists. I don’t see any racist signs. We’re just patriots who love our president."

Jacob Acuña contributed to the report.

Meet the future of the ASU men's tennis program