How investments in cybersecurity link Michael Crow, the CIA and a venture-capital nonprofit

ASU President Michael Crow is widely known for molding ASU into the “New American University” by pulling the University’s research and innovation into the 21st century.

One of his lesser-known ventures into those fields is In-Q-Tel, a nonprofit that funds technology startups on behalf of the CIA and other government intelligence agencies.

His work there mirrors a growing interest in cybersecurity nationally — and at ASU. The University recently developed a cybersecurity consortium to create jobs in the field.

Crow has been chairman of the nonprofit’s board for 18 years. The firm invests in up-and-coming companies that solve technology needs of government partners, which include federal agencies such as the FBI, National Security Agency and Department of Homeland Security.

The firm focuses on quickly-developing areas like cybersecurity to help preserve national security.

Crow has served as the chairman of the board of trustees and director of the Arlington, VA-based firm since its establishment in 1999.

Despite his leadership position in In-Q-Tel — which is named after James Bond’s gadget provider “Q”— Crow said his close relation with the company doesn’t affect his commitment to ASU.

“There’s no time commitment issues … associated with my job as the president of the University,” Crow said in a September interview with The State Press. “My job in (In-Q-Tel) is to help nationally create this entity along with other leaders from other sectors and devote a few hours and hopefully some good ideas to help the team that we hire who works on those things full time.”

Crow became ASU president in 2002 after serving as executive vice provost at Columbia University, where he led the school’s digital media initiative. He is also a presidential appointee of the U.S. Department of Commerce’s National Advisory Council on Innovation and Entrepreneurship.

According to his curriculum vitae, Crow has served on 30 different boards over the years, and his role at In-Q-Tel is one of eight current board positions. His current memberships are mainly in education and economic councils like the Greater Phoenix Economic Council and the Council for Aid to Education.

He is one of the few In-Q-Tel board members from the education world. Other In-Q-Tel leaders' and board members’ backgrounds are mainly in the government, business and technology sectors.

Jamie Winterton, a doctoral student and cybersecurity expert at ASU, said there has recently been a more pronounced interest in cybersecurity nationally and at the University.

When she came to ASU three years ago, she said she spoke to different departments interested in cybersecurity and helped create the Center for Cybersecurity and Digital Forensics to approach this field from an interdisciplinary perspective.

Other initiatives include the Cybersecurity Education Consortium, which was established at ASU to alleviate a growing shortage of nearly 300,000 unfilled jobs in cybersecurity.

“The consortium was founded here at ASU to deal with that talent gap and address the problems in the field (and) to not only create more cybersecurity warriors, but cyber warriors who are better equipped to handle the challenges they’re going to see in the real world,” Kim Jones, the consortium's director, said.

Starting next fall, all computer science majors at ASU will be required to take a security class, Winterton said.

She said the national advancement of cybersecurity is essential for the government because the security systems protecting national security need to be faster than the attacker. Organizations like In-Q-Tel help bring those developments to market.

“In-Q-Tel serves the intelligence community, which is all about what do you know and what you can find out to make yourself more secure,” Winterton said. “And the government is definitely interested in cybersecurity, threat intelligence specifically, because the more we can know about the threat, the better we can construct systems that will resist it.” 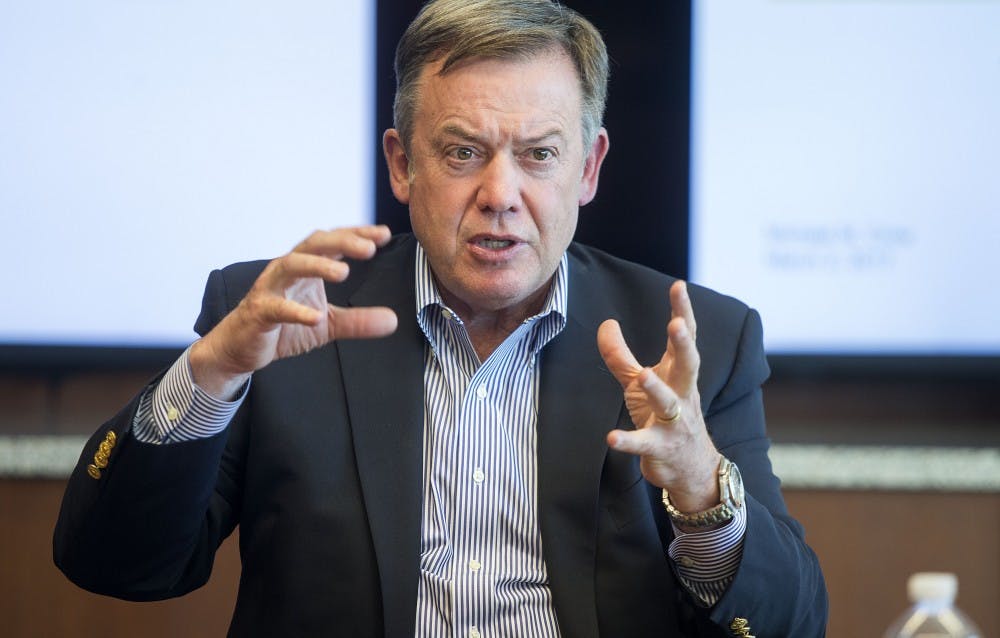 ASU President Michael Crow meets with The State Press editorial board in the Fulton Center in Tempe, Arizona on Thursday, March 2, 2017. Crow spoke about the University's methods of calculating tuition for students.

In-Q-Tel’s investments typically range from $500,000 to $3 million per startup company, according to In-Q-Tel’s latest corporate overview brochure. The venture capital firm assesses more than 1,000 companies a year, according to the brochure.

In-Q-Tel does not disclose funding information for its portfolio companies, according to its external relations director Carrie Sessine.

Its website lists 212 startups under the “Our Portfolio” webpage. Many are in data analytics (39), data management (26) and materials and power (20).

More than 20 of In-Q-Tel’s portfolio companies focus on cyber and mobile security.

The State Press contacted 17 In-Q-Tel employees listed on the company’s website, and none made themselves available for an interview.

Sessine said in an email that the company rarely does interviews.

“We don’t have anything to add beyond the information from our corporate materials and website, and we generally don’t participate in media interviews,” Sessine wrote in the email.

The CIA, the National Security Agency and the Defense Intelligence Agency were also contacted by The State Press and did not respond for comment, while the Department of Homeland Security declined to comment.

“The Department does not disclose information about the specific systems or products it uses because this information could be used by adversaries seeking to exploit these systems,” DHS spokeswoman Anna Franko wrote in an email.

One of In-Q-Tel’s newest portfolio companies is Evident.io, a startup focused on cloud security that received an investment from In-Q-Tel in March 2017.

Prendergast worked as a cryptography engineer after his time at the University. He ended up working for Adobe Systems, helping it transition to a cloud environment.

He says he has connected to a number of ASU alumni in the cybersecurity field but didn’t know Crow was part of In-Q-Tel until the company reached out to Evident.io to bring its public cloud capabilities to federal agencies.

“It's a really small world; I didn't know Crow was part of In-Q-Tel until they made the investment,” Prendergast said. “Often when I'm out in the world of cybersecurity, I run into someone who's a Sun Devil alum. It's exciting to touch base and figure out when we were there.”