The University offers various resources when it comes to bike theft prevention, but students say there is room for improvement

ASU bike theft numbers are the lowest they have been in years, according to daily logs from the ASU Police Department.

The logs, which show crime numbers on and near ASU's campuses from May 2010 to March 2018, show a decline in reported bike thefts in recent years. Even though theft numbers have decreased, some students claim that more could be done when it comes to reducing bike theft at ASU.

By this point in the calendar year, 2014 had the highest number of reported bike thefts with 145. This year is the lowest since 2011 with 73 reported thefts. 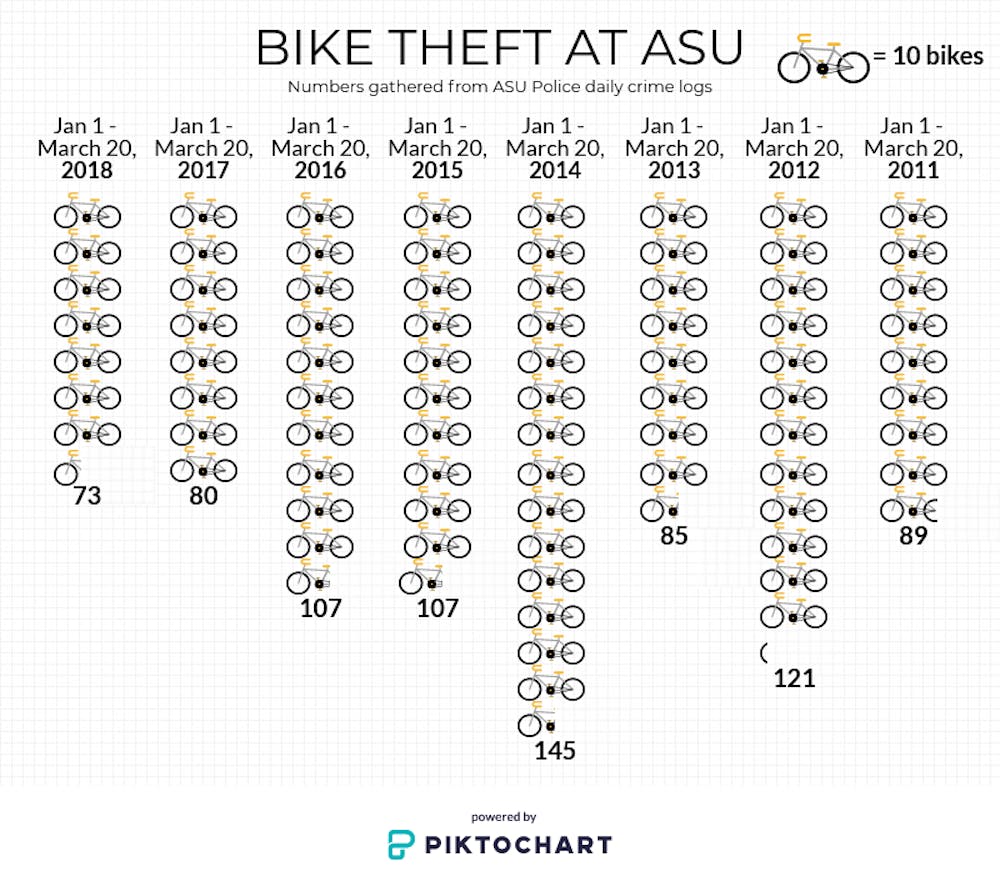 According to ASU Police, 2018 has shown the lowest number of reported bike thefts since 2011. Numbers gathered from ASU Police daily crime logs.

Katelyn Weinzinger, a mechanical engineering freshman, said she locks her bike up in the same spot outside of her dorm in Tooker House on ASU’s Tempe campus every day. She uses a steel spiral cable lock and threads the cable through her bike frame and front tire, as well as the bike rack, before locking it.

When she left for class on Feb. 9, Weinzinger said she noticed her bike wasn’t in its regular spot, but she didn’t see any metal from a broken lock. She spent a few days looking around to see if she’d maybe left the bike somewhere else and simply forgotten it, but it never turned up.

She filed a report with ASU Police on Feb. 13, but hasn’t heard anything yet about the status of her bike.

Weinzinger said she thinks ASU PD could do a better job when it comes to updating students on the status of stolen or missing bikes.

“I wish I had more contact from police with updates, even if it’s just like, ‘Hey, we don’t have anything yet, but here’s what we’re doing and here’s what you can do,’” she said.

As for her fellow bike-riding students, Weinzinger recommends registering bikes with ASU Parking and Transit Services, a free service the University provides for all students. She said when she registered she was given a sticker to put on her bike to deter thieves, and the reporting process for registered bikes is much quicker if the bike does end up getting stolen.

“Reporting it was so much easier for me because I had my bike registered...” she said. “You’re able to just look up the serial number and the sticker number they give you when you register —  it only took a couple minutes.”

"We really try to push bike registration when we meet students at our tabling events," she said. "We always have our crime prevention unit out on Hayden Lawn any time we have events going on, and they will promote registering your bike and making sure that you use a U-lock and a cable lock."

Harris said one of the best tips she can offer to students to help maintain this downward trend in bike theft is to pay attention to the kinds of locks they use.

“Never use only a cable lock,” she said. “If you use a cable lock, you’ve gotta have a U-lock too because someone will break through the cable lock. Cable locks are really easy to snap through – they’re kind of flimsy, whereas the U-locks are made out of steel so they’re much harder to break through.”

When students only use cable locks, Harris said their bikes are most prone to theft because breaking the lock doesn’t take long and doesn’t draw too much attention. The sturdiness of the U-locks, however, makes a quick, unnoticed getaway much more difficult.

ASU PD also recommends riding an inexpensive bike on campus to avoid catching the eye of a bike thief.

“Get a simple bike, something that’s inexpensive and won’t draw attention from someone who’s trying to steal,” Harris said. “We really try to teach students from the beginning about bike safety because a lot of times kids will show up to school here, and they’ll have an expensive bike, and it’ll be more prone to being stolen because of that.”

Connor Murphy, a senior studying journalism and political science, said using the recommended U-lock to secure his bike didn’t protect it from theft.

Murphy, an active cyclist, said he usually used a cheaper bike to commute to and from campus and reserved his $1,500 cycling bike for cycling occasions.

After riding his cycling bike to campus one weekend in the fall of 2016, something he rarely did, he locked it in front of the Memorial Union and later found that it was stolen.

Murphy reported the incident to ASU PD even though his bike was not registered with ASU and said officials were helpful throughout the process.

“ASU PD was helpful and upfront,” he said. “They told me, ‘Odds are you’ll never see that bike again,’ but I appreciated the honesty. They did all they could do, there just wasn’t much you could do.”

While there are theft prevention resources available for students, Murphy said more could be done to reduce numbers of stolen bikes and is now more cautious when it comes to bike safety.

"There should be CCTV camera footage on every campus, and all the time to review it is tedious, but that's a place to start," he said. "Actually going through the video footage would be a good method."

Bike safety at ASU from ASU Business and Finance on Vimeo.

Sarah Winkelman, a sophomore studying political science and global studies, said that even after putting two locks around her bike in order to secure it, parts of her bike were stolen outside of Manzanita Hall.

Winkelman said her bike’s seat was stolen March 2017, and a month later, both its tires were stolen on separate occasions.

She said her bike was not registered with ASU, and after her experiences, she would rather walk around campus than use a bike.

"I didn’t bring my bike to campus this year because because I didn't want to risk it (getting stolen) again," she said.