Though there are still some positions to be filled, USGT transitions to next year's senate

Nikki Tran, computer science sophomore, was appointed the incoming vice president of services in the wake of Logan Miller's departure. She was previously involved with Next Generation Service Corps and 942 Crew.

President Allison Sorgeloos, an educational studies junior, and Vice President of Policy John Gimenez, a political science sophomore, were also sworn in before the senate, repeating an oath pledging them to service of the ASU student body.

Sorgeloos said she is excited to become the president of the largest public research university and that she's ready for the next year.

"There's definitely a lot of next steps and a lot of work that we are ready to dive into," Sorgeloos said.

Several new senators were sworn in as well. 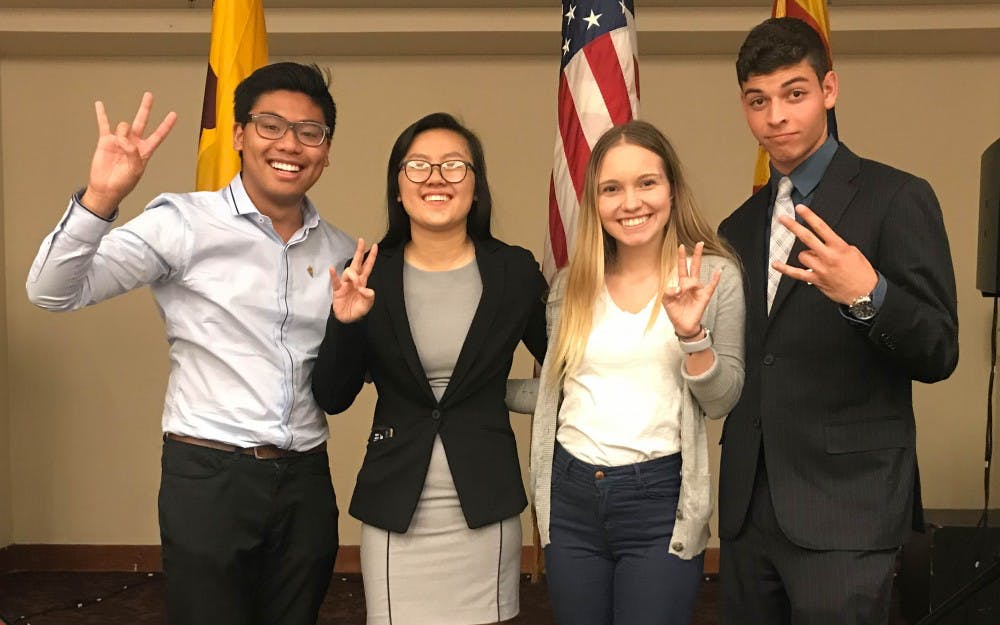 John Gimenez, Nikki Tran, Allison Sorgeloos and Joshua Blinkoff pose for a photo at the Memorial Union in Tempe, Arizona, on Tuesday, April 24, 2018.

With the new senators seated, they began the first session of the 2018-2019 school year, in which they appointed Tran, the next vice president of services and voted on a senate president.

Joshua Blinkoff, a junior studying business law and managment, was appointed as the senate president after a speech from him and his opponent, sustainability sophomore and Senator Elyse Kats.

"I really enjoyed senate this year," Blinkoff said. "I was super passionate about passing legislation and all the ideas that go into every bill — it's super complex."

Blinkoff said he is a goal-setter and is planning to push the senate toward achieving more than they did this year.

Tran competed for the vacated vice presidency with USGT Senator Chaz Simmons, political science and economics sophomore. They applied, interviewed and then spoke about their goals in front of the newly elected senators.

"In all honestly, all I see myself in is services — that's what I want to do in the future," Tran said. "Giving back to people is what really defines services so that's why I chose VPS."

After Sorgeloos and Gimenez interviewed the candidates for VPS, the candidates presented their platforms were voted on by the new senate. Sorgeloos said the next step is to collaborate with Tran and get ready for the new year.

"Her ideas are a little bit different than ours, so we get to have the awesome difference in ideology and ideas that we can mesh and mash and create an awesome cabinet of directors," Sorgeloos said.

The VPS for USGT is tasked with managing all the USG directors while also directing the Bike Co-op and the Safety Escort. VPS is also in charge of travel funding and appropriations, said current vice president of services for USGT, Lester Nnagbo, a criminal justice and criminology senior.

Sorgeloos said she is happy with Tran at VPS but is grateful for the work that she did with Miller.

"He had some things that he had to take care of and some other things that were going to be best for him," Sorgeloos said. "And, in the long run, that's what USG is all about — advocating that students get the best for themselves throughout the college experience."