Students get their kicks at Foster the People's InfernoFest performance

Indie pop superstars Foster the People, who were thrust into the spotlight with their 2010 release of the hit song “Pumped Up Kicks,” performed a sold out show at ASU’s InfernoFest at Wells Fargo Arena on Thursday night.

InfernoFest is an annual, free concert for students hosted by the ASU Programming and Activities Board in collaboration with ASU student government.

ASU alumnus and three-time InfernoFest performer DJ Munition opened the show with a high-energy set that was riddled with nostalgic songs such as Paramore’s “Misery Business,” Blink-182’s “All the Small Things” and the Killers’ “Mr. Brightside.”

The setup time between DJ Munition and Foster the People left students anxiously awaiting the headlining performance of the night, and a “Foster” chant broke out minutes before the Southern California indie band took to the stage. 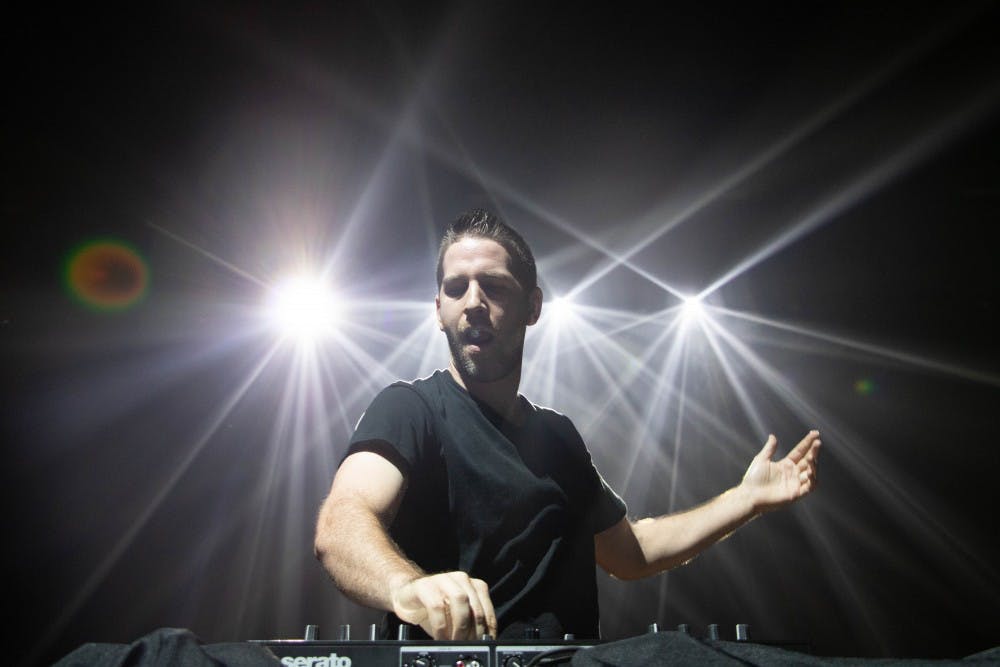 The band's front man Mark Foster took time before one of the last songs of the night to give out the phone number of Arizona Senator Jeff Flake and urge students to call and tell him to vote "no" on the confirmation of Supreme Court nominee Brett Kavanaugh.

Earlier that day, Kavanaugh and the first of four women to accuse him of sexual misconduct, Christine Blasey Ford, testified before the Senate Judiciary Committee and at the time Flake was reportedly undecided on how he would vote.

“The power of your voices together will change the world,” Foster reminded students.

This wasn’t Foster’s first speech of the night; he also talked to students about taking chances and overcoming fear in order to do what they want to do. He told students that making “that simple choice of being afraid but doing it anyway is what changed our lives.”

Aly Perkins, a senior studying public service and public policy and the president of ASU's Undergraduate Student Government Downtown, helped organize the show and said it turned out to be a success.

"It seemed like there was a good energy in the stadium," she said. "Even if students didn't know all the lyrics, it was still very much an upbeat, dancing environment where it was easy to groove along to the band."

Ellena Whitfield, a sophomore studying journalism, was very impressed with the show. “They had a really great performance,” she said, “They played a wide range of new and old songs, and I think there was something for everyone in the performance.”

Whitfield also mentioned that she loved the stage design, which included a big neon sign reading “Sacred Hearts Club,” with multicolored strobes and dreamy spotlights penetrating a cloud of smoke.

Foster the People at InfernoFest

Recreational Therapy freshman Liesel Stoxen said the most memorable moment of the night was the performance of “Pumped Up Kicks,” which drew a roaring approval from the crowd as soon as the first synthesized chord was struck. “That’s definitely my favorite song,” she said. Stoxen said she wasn’t particularly fond of DJ Munition’s set, however.

Emily Keenan, a sports journalism junior, said she is a big fan of the band and loves watching them play. “I’ve seen them four times and it just gets better every time,” she said, clutching a drumstick she caught after the show. “Let’s be real, this band is my life.”