With over 20,000 registered nonprofits in Arizona, a new outdoor brand founded by an ASU student seeks to provide buyers with trendy and quality products while funding nonprofits targeting local issues.

Brandon Flowers, a sophomore majoring in business entrepreneurship, started Gravity Clothing in August 2018. Flowers said he wants to go into the medical field and this has led him to travel around the world and see a lot of the work that people put in to creating nonprofits.

He said these experiences sparked the idea to create a clothing line that could collaborate with nonprofits and eventually transition into becoming a nonprofit itself by donating all of the proceeds to a new organization each month.

"We want to just get the word out for a lot of great work people do that is commonly not seen just because it gets drowned out in the thousands of other nonprofits," Flowers said. 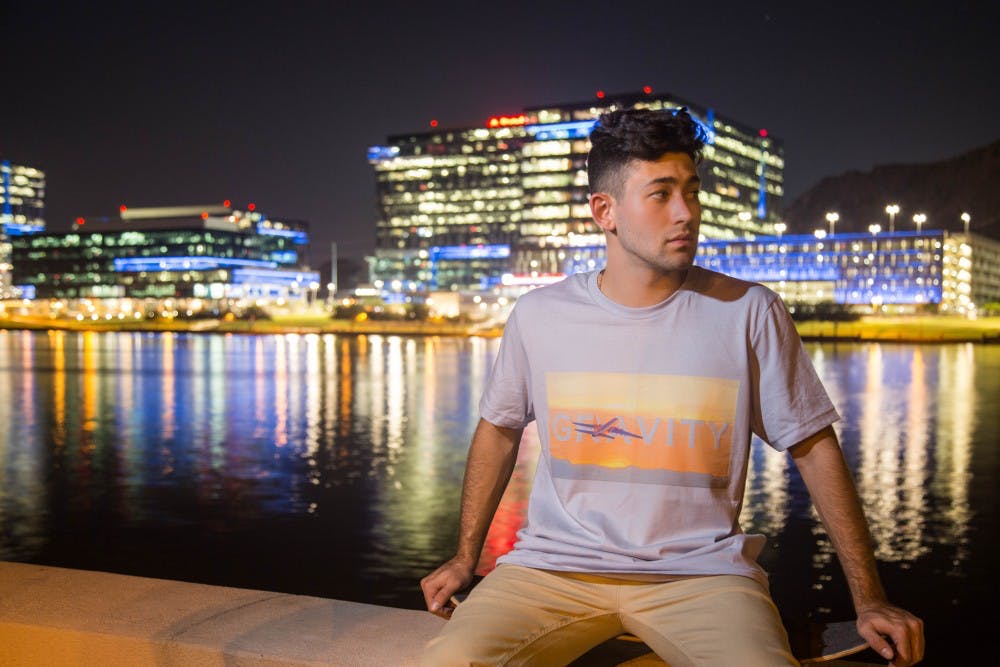 ASU senior, Dakota Villanueva, poses for a photo in Tempe, Arizona, on August 19, 2018.

Flowers said his older brother Nicholas Flowers, a senior majoring in technological entrepreneurship and management, was a major influence and helped the process of starting the company go smoothly.

"My brother was very instrumental about even simple questions like how to manage taxes," he said.

Brandon Flowers said the company made over one hundred sales in the first month of production and he hopes to increase sales by adding a personal touch to new orders.

"We hope to customize our packaging and build our image more as a bridge between donors and nonprofits," Flowers said.

Flowers also seeks to reach out to nonprofits and offer them a free way to market. They have only donated to one nonprofit so far, but as their brand evolves, they plan to reach out to a new nonprofit each month and create merchandise for them such as stickers, clothing and water bottles.

"A photo will go out to show the background, how to find the organization, how to volunteer with them, how to donate with them and also how you can buy apparel that not only benefits them, but also gets their name out," Flowers said.

While Gravity Clothing is currently donating only a portion of their sales to the The Conservation Fund, the plan is to eventually donate all proceeds to whichever nonprofit they are supporting that month.

He said he plans to begin by reaching out to local nonprofits in Tempe that are trying to grow and would therefore benefit greatly from the donation model.

“It has impacted the city of Tempe because we provide services to 25,000 individuals with Down syndrome and their families,” she said.

Joey Bradley, a sophomore marketing major, is the director of outreach for Gravity Clothing.

“I’ve been doing social media since my early high school years, so we figured why not put it to good use," Bradley said. "Nonprofits are the best way."

Their third counterpart is director of marketing, Ryley Demmith, who is located in Wisconsin and has helped the company expand their sales.

The group decided on the name Gravity as a symbol for the impact that a nonprofit can make.

"We took gravity in its literal sense and the power it has," Flowers said. "Gravity is a force that changes and moves things."

Flowers said the company based their first designs on nature and environmental themes because of their affiliation with the National Conservation Fund, but will change designs to fit the needs of future nonprofits with which they collaborate.

"We want our brand image to be ever-changing," he said. "Ultimately, we’re not trying to represent Gravity itself, but to represent these nonprofits."

He said customer satisfaction is their priority, so the team sampled many fabrics to get the best quality.

"Giving someone something that they'll actually wear, that feels comfortable is something that in the long run is very beneficial and will have people keep coming back," he said.