Raising awareness through entrepreneurship: Black brothers with a message

This family is focused on bringing activism into the fashion industry

Melvin Lupampa is the creator of Cultural Suicide, and his younger brother, Michael Lupampa, is the co-founder and an ASU senior majoring in biological sciences.

Melvin Lupampa came up with the idea of the company and trademarked Cultural Suicide at the age of 18 during his freshman year at NAU after learning about Native Americans assimilating to white culture in a history class.

While going to NAU, Melvin Lupampa originally wanted to be a lawyer but was discouraged because of the 2012 George Zimmerman trial which involved the murder of Trayvon Martin.

"The name of the first collection is 'Being Loud without Saying a Word,'" Melvin said. "The whole purpose is that the pieces are supposed to be conversation starters. It opens a door to dialogue or also to show people where you stand without having to say anything."

Currently, the first collection is planned to launch online and on social media around February 2019. It features four pieces of apparel including pants, a leather jacket, a button up shirt and a bulletproof vest. Each has a unique message with the goal of empowerment and awareness.

Michael Lupampa said the importance of the bulletproof vest is that it's bold and is meant to be worn as a message of activism by raising awareness of cases in which the law fails to bring justice to victims of police brutality.

"The first thing that you see besides the vest are these white letters that say 'since they're shooting us anyways,' which is powerful because black kids are getting gunned down in the streets and cops are getting away with it," Michael Lupampa said. "They might as well be in a bulletproof vest if the law can't protect you." 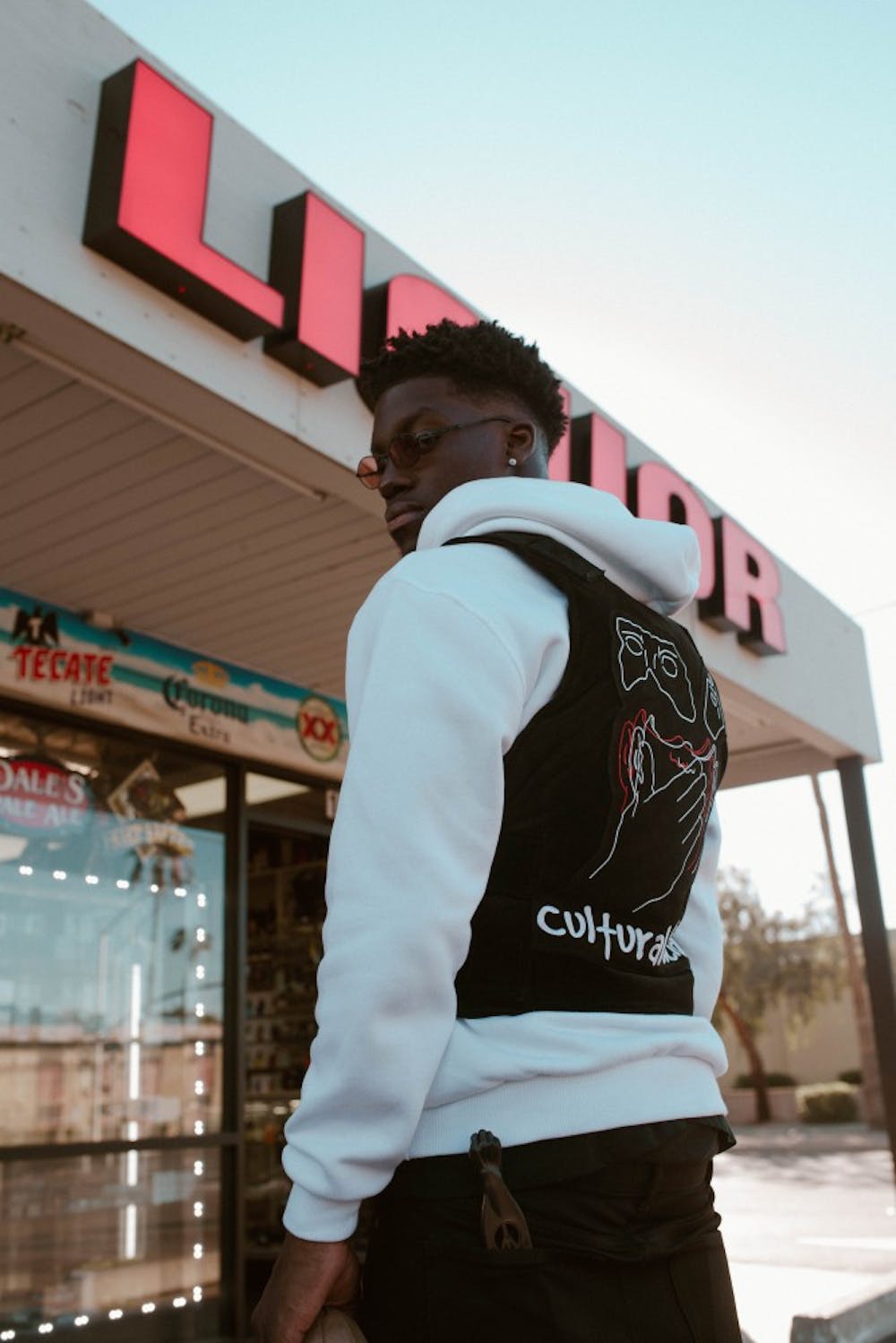 ASU senior Michael Lupampa wears the bulletproof vest from the 'Being Loud without Saying a Word' collection from Cultural Suicide in Tempe, Arizona, on Saturday, Oct. 27, 2018.

Michael Lupampa shared the vest during his class presentation earlier this year where he talked about voter suppression.

"I knew that people would say something about the vest," Michael Lupampa said. "The professor was like, 'let's talk about that.' Always, that's the kind of the reaction we get. It's always something that someone's drawn to, and they know they want to know more about it."

The collection is meant to not only start a conversation, but be unique to the fashion industry.

"This is not going to be something that's going to be produced a thousand times, but it's a piece of art," Melvin Lupampa said. "Wearing the clothing represents you coming into your own (and) being unique."

In Arizona, there have been multiple marches and protest against police brutality, including stories on ASU affiliates being involved, and in May 2018, viral surveillance footage of three Mesa police officers beating a 15-year-old boy led to a protest held by the activist movement Black Lives Matter.

Melvin Lupampa and Michael Lupampa both said they have dealt with unfair treatment by law enforcement multiple times when growing up in Boston and even more while living in Arizona.

Melvin Lupampa said he was pulled over in San Tan Valley with his friends, which included two other black men and his white friend. The police officer then called him a racial slur and questioned his white friend on why he would chose to hang out with black people.

"(What) we deal with every single day shouldn't be normalized," Melvin Lupampa said. "So that's what made me (think) the first collection is going to focus on the struggles of African Americans."

"When I get pulled over, which happens frequently, one of the questions that I've been asked several times on every occasion is, 'Is this your car? Do you own this car?' One officer did ask me, 'How can you afford this car?'" Michael Lupampa said.

Michael Lupampa said he feels not only targeted but worries for his life.

"That's what I have to deal with. If I see the flashing lights in my rear view mirror I don't sit here and think like, 'Oh man, I'm about to get a traffic ticket and then go home and be pissed off.' I think, 'This may be the time that my mom's gonna see me on the news that I was gunned down,'" he said.

Despite the multiple instances of unfair treatment and discrimination, Melvin Lupampa and Michael Lupampa do not believe all cops racially profile.

"I don't think that cops individually are bad people. I think the system that they're forced to operate in constantly violates our rights, so that's the problem," Melvin Lupampa said.

Veronica Lupampa is a business manager senior at ASU and was born and raised in Uganda, migrating to U.S. to Boston in 1989 to pursue her education and opportunity to succeed.

"I think, even for (our parents), they just wanted a better life for their kids. For me to even be a kid that's like, 'I'm going to have a clothing line and I'm going to design clothes' ... them just coming here allowed me to be able to do that," Melvin Lupampa said.

Being entrepreneurs has opened up a gate of opportunities to further push the Lupampas to achieve their American Dream.

"By having a clothing line, we are trying to succeed in America," Veronica Lupampa said.

Despite the bold statement of Cultural Suicide's bulletproof vest, Veronica Lupampa looks forward to her sons standing up for an important cause.

"To be honest, I'm not worried," Veronica Lupampa said. "I encourage them to work hard and earn whatever money they use for anything. When they were raised, they knew exactly what is right and what is wrong."

The idea behind the next collection will center around the empowerment of black women.

"There was a girl I used to date, and it would bug me when I would show people pictures of her and they would always say, 'She's really pretty for a black girl.' Melvin Lupampa said. "That's even told to my sister or mother, and I always felt that was really offensive for people to say that."

As issues regarding race and culture continue, both brothers hope they can make a change.

"This is just the beginning of all of the things that we'll do together to make an impact on the fashion world, and that's a dream we share," Michael Lupampa said.