Students expecting to see the familiar double-decker shuttles wrapped in "#1 in innovation" banners pulling up curbside after returning to the University for the spring semester were met instead by a new fleet of shuttles.

The new single-story shuttles come as part of the three-year contract ASU signed with Arrow Stage Lines in December, making the company the official provider for the University’s intercampus shuttle system. According to the University, students can expect “increased frequency, improved services and new rider amenities” through this new partnership — along with some new rules concerning bike and skateboard transportation.

“We wanted a new company that really understood our desire to provide a best in class service for our students,” said ASU Director of Parking and Transit Melinda Alonzo.

Alonzo said the new provider and accompanying changes will help the intercampus shuttle system have a smooth start to the semester.

Some of these new amenities and services include “higher-speed USB charging ports, overhead luggage storage, reclining seats and increased legroom,” according to the official ASU Intercampus Shuttle Twitter account, @asu2asuShuttles.

An all-new shuttle fleet and departures every 15 minutes on Maroon and Gold routes to help Sun Devils get places on time. https://t.co/KDgUyipsAg @ASUtransit @ASU @USG_ASU

Alonzo said that as problems arose concerning the quality of the service and shuttles previously provided, the University decided to start looking for a new provider.

Normally, shuttle providers are chosen through a selective bidding process, but because of the timing and urgency of finding a new service, the University applied for an emergency waiver to forgo the normal bidding process and go with a company with previous ties to ASU.

Arrow Stage Lines has provided charter service for ASU sports teams and special events for over a decade, and Alonzo said Arrow State Lines will continue to provide charter service.

“It saved the University time and allowed us the ability to make sure we can have continuity of our services and not miss a beat on providing the service,” Alonzo said.

She said an important factor in choosing a company was its ability to provide services including the integration of shuttles and training of drivers.

“When it came down to the presentations, Arrow (Stage Lines) was the provider we felt most confident could conduct the level of service we were looking for,” Alonzo said.

Todd Koehler, southwest region director for Arrow Stage Lines, said working with ASU for the intercampus shuttle system has been a long-time goal of the family-owned motor coach provider.

“The ASU shuttle has been a program we have wanted to do for the last 13 years I have been with the company,” he said. “We felt that we could operate the shuttle at a high level of customer service to provide students with high-class and safe transportation.”

However, the change in provider did not come without a price tag.

All factors included, the University had to nearly double the $4.5 million annual budget set aside for the shuttle service in the fall, and it now costs the University over $8 million per year.

Alonzo said that the significant increase in cost is a price the University is willing to pay for improved quality and service.

Changes to the look and operation of the intercampus shuttle system were also a major contributor to the cost, Alonzo said.

The University chose to revert back to single-story motor coaches because double-decker buses take longer to manufacture. This reduced the available seating in each shuttle from 81 spots to 56.

Additionally, the service increased the frequency of the Maroon and Gold routes from every 30 minutes to every 15 minutes. To accommodate this change, the University needed to increase the number of total shuttles in the fleet by about ten.

Though only 21 buses are in use at a time, the contract with Arrow brings in 25 brand new buses devoted solely to the University’s intercampus shuttle system. Alonzo said the previous shuttles were bought re-furbished at the beginning of that contract in 2015. 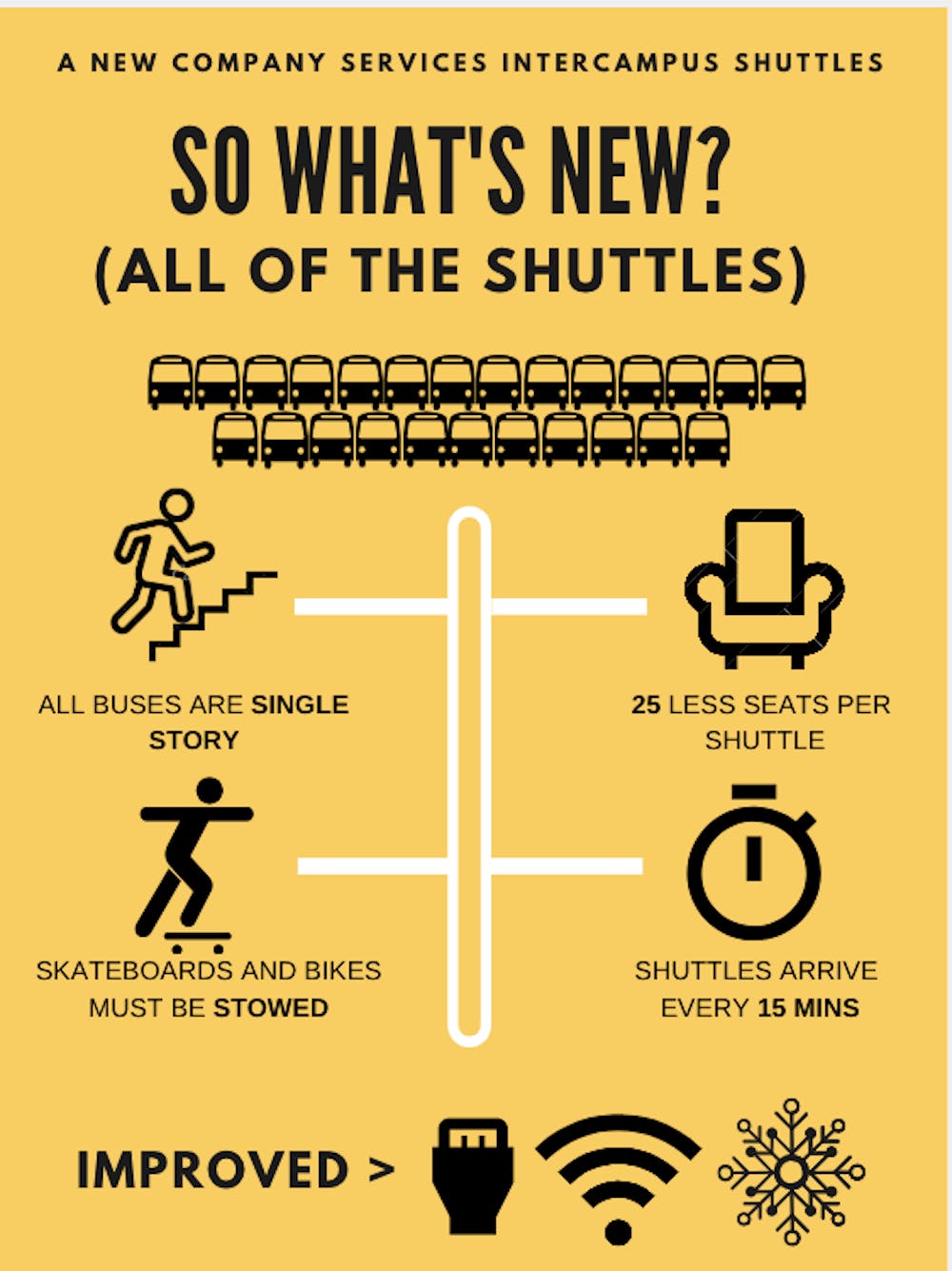 “They are all top-notch buses and will be easier to maintain,” Alonzo said. “We are being even more stringent on the new company to maintain the new equipment, so we will be having frequent audits to make sure they are doing their due diligence to make sure the shuttles are functioning great.”

Scott Duncan, Arrow Stage Lines shuttle operations manager, was hired to oversee the ASU intercampus shuttle system. He said the company has a top-notch maintenance program so the shuttles “start new and stay looking new for a long time.”

To this end, new policies include a mandate that students store bikes and skateboards in the storage compartments underneath the shuttles.

“ASU and Arrow Stage Lines set up a plan for all skateboards and scooters to go under the first compartment bay and bicycles in the second and third bay,” said Arrow Stage Lines motor coach driver Ray Wallace. “This plan is to protect the interior of the buses and the safety of the students.”

Koehler said new bike racks are being manufactured and will be outfitted on the busses in early February.

“(They) had to be produced and they are supposed to be here and delivered and start being installed on Feb. 4," he said. "We got 24 of them, so I’m not sure how fast the manufacturer can get them installed per day, but our goal is to have all the bike and skateboard racks in place by Feb. 15.”

While most parts of the contract are new, there are some familiar aspects. Koehler said many of the shuttle operators were drivers under the previous contract as well.

“We conducted our own interview process and a new training for all of the drivers,” Koehler said.

The training coached drivers on professionalism, safety, sharing the road and how to accommodate passengers with disabilities.

The University also reached out to Arrow Stage Lines to seek assistance with the intercampus shuttle system late last semester. Alonzo said shuttles from the previous provider, Silverado Stages, were taken offline for two weeks during an audit of the former shuttles.

“When we took their shuttles out of the system, we still had to have shuttles running the service,” Alonzo said. “We looked to Arrow and All Aboard as local charter services to help us fill the gap.”

Koehler said the University approached Arrow Stage Lines to apply to fill the position shortly after.

What happened to Silverado Stages?

Silverado Stages, the provider which operated the intercampus shuttle system from 2015 until recently, still had a year in its contract when it was terminated mid-December of 2018, Alonzo said.

“There were service issues — they just weren’t providing,” she said. “There were a host of problems throughout the semester, so last fall mid-semester we decided we were better moving forward with another provider.”

Alonzo said the issues included the deterioration of buses, missing stops, unaddressed issues and a multitude of complaints flowing in on Twitter.

If, for once, the ASU campus shuttles could arrive on time that would be amazing!

Silverado Stages filed for chapter 11 bankruptcy in October to restructure the company’s debt, according to district court documents.

Alonzo said the bankruptcy showed that Silverado was struggling, which she said was evident by the ongoing service issues.

“For us, those were all very good indicators we needed to start pursuing a new operator,” Alonzo said.

Michael Jones, who is representing Silverado Stages in its bankruptcy, declined to comment.

The University said it is feeling positive about the shuttle changes.

Over the next three years, the University is confident that Arrow Stage Lines will be a great provider for the intercampus shuttle system, Alonzo said.

“We feel really good about the direction the intercampus shuttle programming is going,” she said. “We are happy that we didn’t miss a beat and our students are now enjoying what we feel is a better service, but we are eager to hear from them about how they feel.”

Clarification: This story was updated on Jan. 27, 2019 at 2:15 p.m. to add details about the legal steps followed by the University to forgo the standard bidding process for selecting shuttle providers.