The 2019 Phoenix Women's March: Defined by inclusivity, led by diversity

The theme of the third annual march was "Rising Together," promoting a message of solidarity

Thousands of people gathered at the Arizona Capitol on Saturday morning for the 2019 Phoenix Women’s March, advocating for women's rights and prioritizing a message of inclusivity.

An estimated 6,700 people attended the march, according to the Arizona Department of Public Safety. Among the demonstrators were ASU students and organizations, who came to the event to support various women's groups and issues.

Participants in the march held an array of signs, celebrating women and condemning the current presidential administration and its policies. The demonstrators chanted various phrases throughout the march, including, “Hey hey, ho ho, Donald Trump has got to go" and "This is what democracy looks like."

Emma Galligan, a freshman studying political science and member of Young Democrats at ASU, said it was vital for students to attend such a march and support women in all communities.

“These issues affect us greatly and they'll affect us in the long run, so it’s important to show up and support all women, especially Black, Latina and trans women,” Galligan said. “In great numbers, we can show how angry we are.” 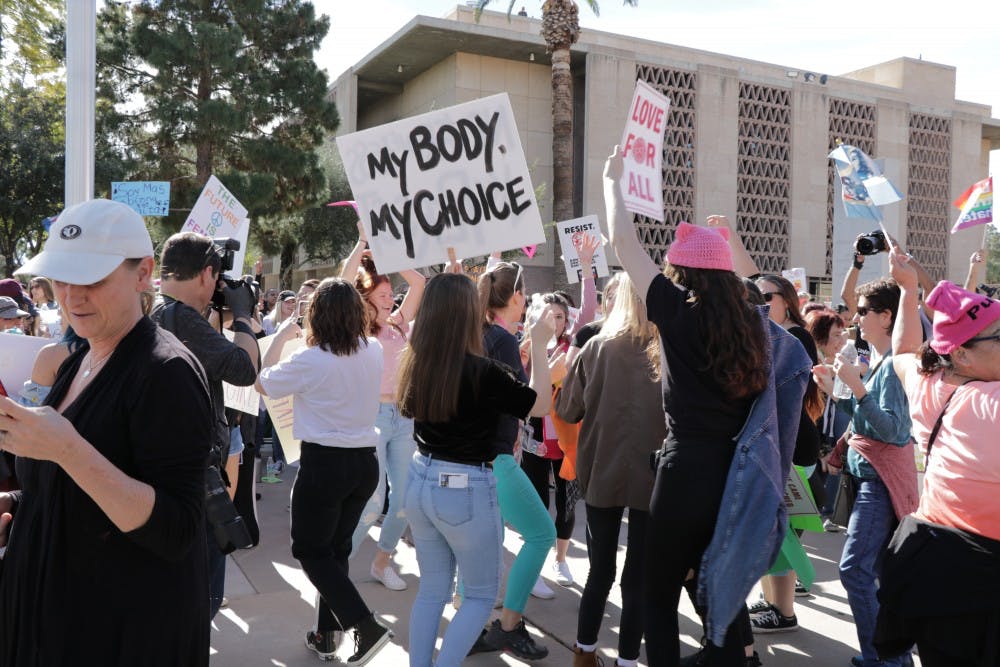 People gather at the State Capitol to participate in the Women's March in Phoenix, Arizona, on Saturday, Jan. 19, 2019.

Attendance for the march dipped in comparison to previous years — in 2017 and 2018, more than 20,000 people marched in Phoenix alone each year. The drop in attendance comes at a time when controversy surrounds the leaders of the national Women's March organization, who coordinated the first march in 2017 and now face allegations of anti-semitism.

The local Phoenix group that organized the march was quick to distance itself from the national organization.

The group selected this year’s theme as “Rising Together" and emphasized solidarity between various social movements, such as pushing for greater representation of indigenous people, the Latina population and people with disabilities. This year's march also brought together movements advocating for reproductive rights and gun control.

Eva Burch, the event's lead organizer, said the march was made to “give a voice to those who are underrepresented,” with indigenous women leading the march and various groups hosting their own gatherings beforehand.

Therese Arvizu, a dancer with the local indigenous group Huehuecoyotl, said that having indigenous women lead the march was important to draw attention to their experiences.

"We’ve always been here, people just refused to see us," Arvizu said. "I think a lot of issues are now common with mainstream society, so it's an opportunity to take the lead with some of those issues and make our voices heard."

Although the Phoenix march was not affiliated with the national Women's March organization, counter-protesters expressing support for Donald Trump also attended the march, with some holding Israel flags in response to the anti-semitism controversy at the national level.

Organizers were quick to redirect the attention of the crowd away from the counter-protesters and back to the speeches and performances being given at the event prior to the march.

Imelda Ojeda, an academic associate at the School of Social Work and the lead organizer of the Honoring Latinas event that took place before the march, said she was invited to help find organizers and speakers that represented the Latina community. 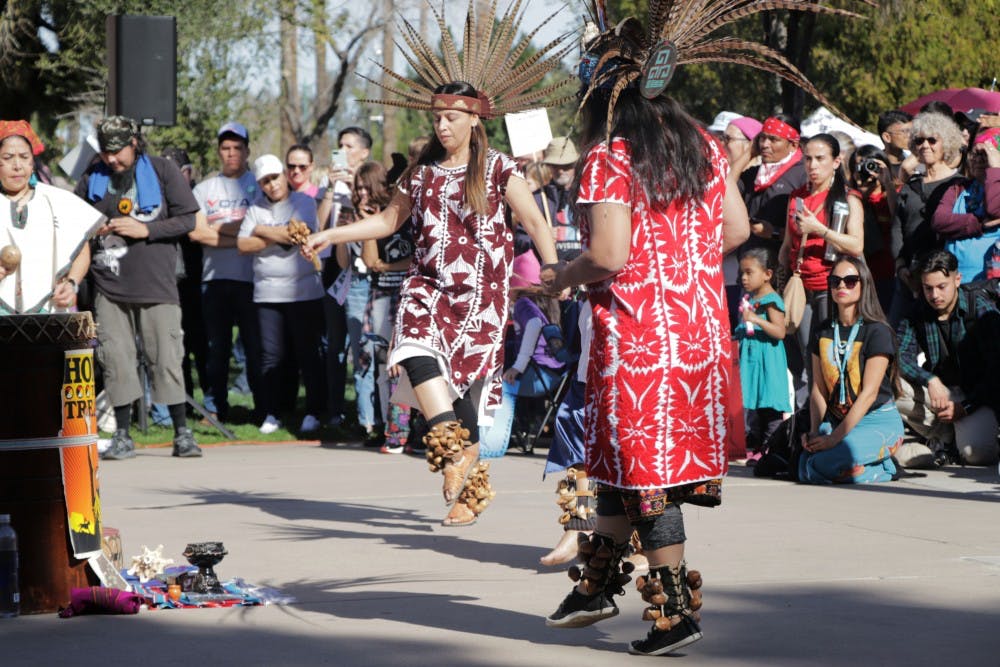 Indigenous women dance after the Women's March in Phoenix, Arizona, on Saturday, Jan. 19, 2019.

“Instead of trying to invite everyone to the main event, we are celebrating and recognizing our individual differences and issues, and then coming together to march with everyone else,” Ojeda said.

Vania Guevara, a Phoenix councilwoman and former ASU graduate student, said this year’s march felt more inclusive than the previous years, with groups that represented different communities striving to break down barriers that might have separated them in the past.

“For so long, it felt like it was ‘us versus them,’ even though we care about the same things and we really have the same issues,” Guevara said. “As the years have passed, I’ve found that more women are talking to each other.”

Alongside women of various religions and ethnicities were refugee women, including Naruro Hassan, a junior majoring in history.

Hassan said that the march shows that women are not going to sit and complain, but rather fight for their rights.

“We all have to come together, no matter the religion or ethnicity, and identify our own experiences,” she said. “As a black woman, as a Muslim woman, as a refugee, I experience the world differently than white women. So it’s a way of celebrating each other’s differences and struggles, but also our successes and accomplishments.”