The transfer that made all the difference: Rob Edwards' rise to Sun Devil stardom

With the Pac-12 Tournament and March Madness right around the corner, ASU men's basketball coach Bobby Hurley has finally established a starting unit to feel good about. Through much of non-conference play and early parts of Pac-12 matchups, Hurley was unable to find a trustworthy five-man group in big-time moments.

An embarrassing two-game losing streak to the Princeton Tigers and Utah Utes forced Hurley to completely remodel his rotation, sending usual starters to the bench in exchange for a more physically imposing starting lineup.

It wasn’t until an absolutely dismal performance by ASU on the road at Stanford that Hurley finally struck lineup gold, as he inserted redshirt junior guard Rob Edwards alongside fellow guards freshman Luguentz Dort and sophomore Remy Martin. The dynamic trio of playmaking guards needed just one game to click, and then were off to the races as the team ripped off wins in four of their last five games, including an overtime thriller over the Arizona Wildcats and a double-digit beatdown of the Oregon Ducks.

“We’ve grown as a team,” Hurley said. “Guys are moving the ball and trusting each other more on offense to share the ball and make the extra pass."

Much of the Sun Devils offensive renaissance is due to the offensive versatility of Edwards, who has averaged 12 points over the Sun Devils' last 12 games, while connecting on 47 percent (30-64) of his threes.

Edwards adds another layer to a sometimes static ASU offense as a reliable threat from outside. He also more than holds his own on the defensive end of the floor, making up for his slighter frame with sound fundamentals and a nose for the ball.

Possibly his most defining characteristic is his emotion, or lack thereof. In contrast to the fiery personalities of redshirt senior forward Zylan Cheatham, Martin, and Hurley, Edwards' calm and cool attitude help balance the team.

The difference in personalities between him and Hurley has also forged an incredible bond between the two, Edwards said.

Hurley seems to reciprocate the feelings of admiration, as he heavily recruited Edwards when the redshirt junior decided to transfer from Cleveland State after the 2017 season. While the two couldn’t be more different in their overall attitude on the court, Hurley is certainly able to appreciate the virtues of someone as composed as Edwards.

“Rob is tricky to read because he has a very blank expression, and you don’t know what’s going on," Hurley said. "But he’s got a fire about him. It’s just you can’t tell."

Edwards makes a calculated decision to keep himself measured and calm throughout the natural peaks and valleys of a game.

Edwards' command on the court has made him one of ASU’s most reliable players in clutch moments, routinely hitting big shots in close-game situations to wrap up a number of Sun Devil victories. Whether it was a pair of free throws with 12 seconds remaining to seal ASU’s victory over Oregon State, or the two free throws Edwards hit with seven seconds left to ice the upset over Kansas, Edwards has come up big time and time again when his team needs him most.

“He’s definitely a guy that I trust," Hurley said. "And he just tells me 'I’m going to make the foul shots.'"

Edwards' recognition of the moment does not just reside in the game’s final few seconds, as he has the innate ability to sense when and where his team needs him most. It’s no coincidence that Edwards' two highest scoring outputs of the season came in the Sun Devil’s two biggest wins so far this season. Whether it was his 15 points and game-sealing free throws against Kansas, or his season-high 19 points against Arizona, the spotlight never seems too big for Edwards.

The maturity and self-awareness Edwards possess are atypical among college athletes, and were a defining factor in his ability to adjust to the difficult journey of a college transfer. Lightly recruited coming out of Cass Technical High School in Detroit, Mich., Edwards took one of his few Division I offers coming out of high school and chose to attend Cleveland State. There he flourished, averaging 16.5 points and 4.5 rebounds for the Vikings. 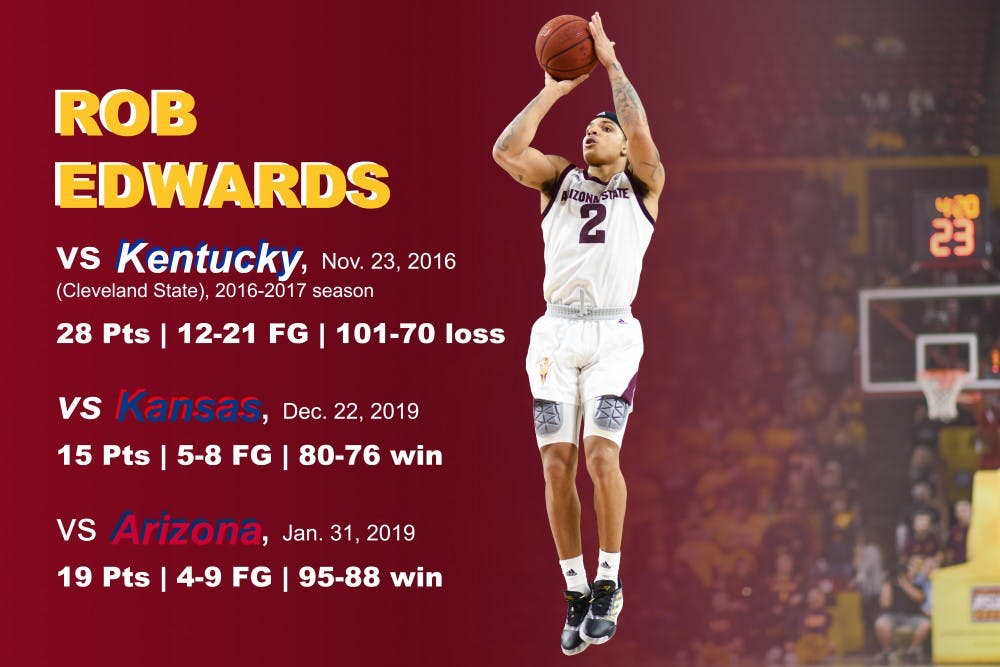 The transition for any college athlete transferring schools is incredibly arduous, and for Edwards – who was now moving more than 1,600 miles away from home to be a Sun Devil – it was one of the most difficult tasks he’s ever faced.

Fully entrenched in the starting lineup, Edwards has begun to shoulder a bigger burden of the offensive workload as the team’s identity fully forms. His connection with fellow guards Dort and Martin has been poetry in motion, and the trio’s instinctive ability to elevate the players around them has transformed this ASU team as a whole.

“I just try to let it come to me," Edwards said. "I don’t really try to force anything. With such a good team that we have, I just try and let everything come to me, not get in the way of anybody, and just be there when called on.”