Apology from racist club CRU was staged, according to former member

Rev. Maupin vehemently denied the allegations and called them "an insult"

A series of chat logs and screenshots leaked to The State Press appear to indicate that members of ASU's controversial College Republicans United club were in contact with a local civil rights leader prior to his tweeting a demand that they publicly apologize for racist and homophobic comments initially revealed by The State Press and Phoenix New Times.

The civil rights leader, Rev. Jarrett Maupin, denies that he had any interaction with the club prior to his demand, but email and Facebook message screenshots indicate that he was part of a deal brokered by a local political operative to facilitate CRU's apology and to minimize negative press coverage about the group.

One of the leaked emails shows that on March 25, the leadership of College Republicans United penned an email to ASU's Office of Equity and Inclusion to notify the University that it had been in contact with Maupin, and that it intended to apologize for racist and homophobic posts that had come to light in the media earlier that week.

An hour later, Maupin tweeted out a demand that the club apologize, and it responded saying it would do so in a club meeting the next day and then publicly a day following. Indeed, on March 27, CRU leadership appeared alongside Maupin in front of a crowd of protestors at Old Main to issue a stilted apology.

We demand an #apology from @ASU's @ASU_CRU by 5pm today or else... Widely reported #racism #antisemitism #homophobia is unacceptable. The @phoenixnewtimes & @cronkitenews stories are troubling. Where do we go from here #SunDevils? #Chaos or #community? #ASU #civilrights #AZ #NEWS

“CRU is currently in communications with Rev. Maupin (regarding) the incident and where to go from here,” CRU President Matthew Northway said in an email sent to ASU on March 25th. One day prior, former CRU president Rick Thomas sent a message to the club's group chat stating that "Rev. Maupin is speaking with ASU on our behalf."

Chat logs between club members and local Republican political figure Merissa Hamilton appear to show that she had reached out to Maupin in order to help lend the apology credibility.

The emails and chat logs were provided to The State Press by the co-founder of CRU Kevin Decuyper, who was recently ousted for continuing to post offensive content on social media after the public apology — which he claims was a ruse to make Hamilton look good. Decuyper has since started a group with a similarly offensive social media presence called Nationalists United.

The accusations add to speculation that Maupin was there to help repair the image of CRU, not to “assess an apology,” as he has claimed.

Decuyper said the apology and involvement by Maupin was coordinated by Hamilton, pointing to emails and chat logs, including the one to the University, to back up his claims. 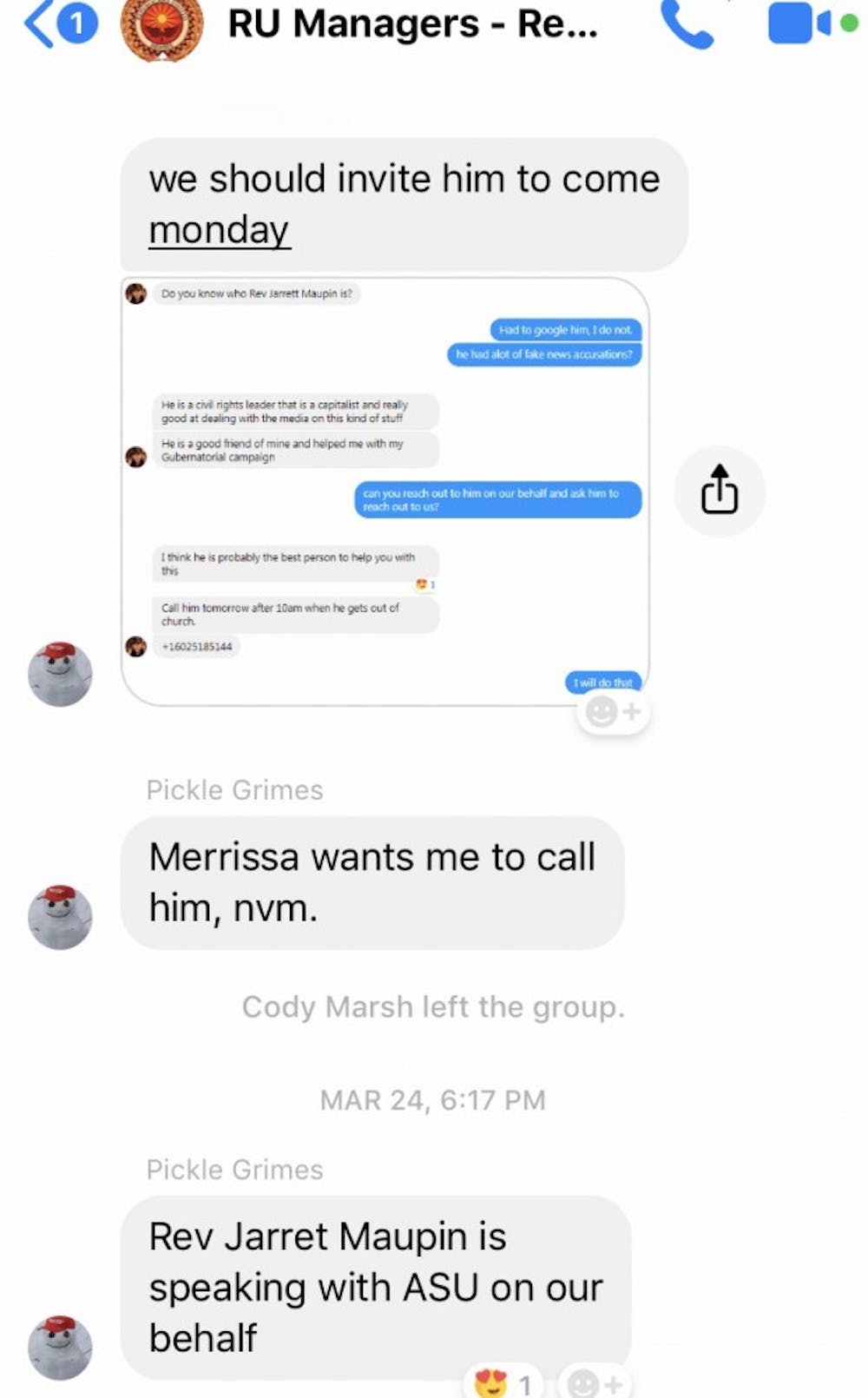 Maupin denied any such communications.

“I did not hear from CRU until after my tweet,” he said in an emailed statement this week. “I believe it was about an hour after my tweet that I was contacted by Ms. Hamilton on the behalf of those CRU members that wanted to make amends over what was revealed.”

When confronted with screenshots that show discussions about his communication with the group days prior, Maupin said he “can’t speak to any conversations I wasn’t a part of.”

“It is quite possible Ms. Hamilton could have guessed I would make that demand,” he said. “I had blasted their state party and every local GOP leader — including her boss — for not chiming in without me having to light a fire underneath them. My only involvement with CRU or Ms. Hamilton was extremely brief — and only related to my agreeing to evaluate their apology.”

In one chat log, Hamilton asked Rick Thomas if he had heard of Maupin, calling Maupin “a civil rights leader that is a capitalist and really good at dealing with the media on this kind of stuff.”

“He is a good friend of mine and helped me with my Gubernatorial campaign,” she said, advising Thomas to call Maupin later that day.

After Northway realized that his email to the University showed that he had prior knowledge of the demand, he switched to audio messages. The messages were also provided to The State Press.

“I am going to start using voice text, we are in a little bit of a crisis right now," he said. "Apparently Merissa is indicating that contrary to what Rick had indicated last night it sounded like this was a suggestion from Rev. Maupin, we SHOULD NOT have reached out to this ASU Office."

Northway went on to call the email to the University a misstep and directed other members to not release anything to the media unless it was checked by Hamilton first.

Audio messages leaked to The State Press of Northway discussing the group's alleged collaboration with Maupin.

Maupin said it is “not rare for political groups, businesses and individuals to anticipate and plan for my response to racial matters in this community, especially after they have committed an offense.”

“My organizers and our constituents ARE the civil rights cavalry around here," Maupin said in the emailed statement. "I am quite proud that the very thought or mention of me/us strikes fear in the minds of racists and defenders of racism.”

The day of the apology, protesters shouted in Maupin’s face, accusing him of working with CRU to help repair its image. He vehemently denied the accusations at the time.

The controversy isn’t the first time Maupin has been accused of questionable methods.

An article in the Arizona Republic from 2017 details a case where Maupin solicited money from grieving families along with other ethically dubious political tactics.

Hamilton said the lead-up to the apology happened in an entirely different fashion.

“The apology wasn't planned as alleged," she said over Twitter Direct Message. "I was in Florida at the time for my mom's medical procedure when the story blew up.”

"I wanted Rev Maupin's opinion as a Civil Rights leader on the situation and he was infuriated and disgusted by the comments too," she said. "I spoke to the CRU leadership and Rick was very apologetic and wanted to make things right with the communities he offended.”

She said after seeing that Thomas, who was found to have said racist and transphobic remarks by The State Press in the past, was apologetic for his behavior, she stepped in to help them set up the apology.

“...I asked Rev Maupin if he would receive an apology, but didn't get immediate feedback,” she said. “Instead he tweeted out a demand which was totally appropriate.”

Another chat log from the morning of the demand shows a conflicting story in which Hamilton tells Northway that CRU would issue a response to Maupin's press release at 2:45 p.m. despite her claim that she didn't know when Maupin would send the release.

According to her, the only coordination she provided was to help them deal with logistics for a large, public apology.

“The CRU leadership wasn't familiar with handling a big press conference, so I helped them with the logistics and encouraged the Club to take further action as an apology wasn't sufficient,” she said. “I attended the CRU meeting (on April 22) and the Club is demonstrating they are committed to taking further action to condemn bigotry and ethno-nationalism and hold members accountable with a process formally identified in their club constitution.”

During that meeting, which was posted to Youtube, members of CRU voted not to adopt anti-discrimination language into their constitution, agreeing to table the vote because of the vagueness of the language, which they felt could possibly allow for persecution of people deemed by the executive board to be “discriminatory.”

Thomas held the line, according to the video, saying Nazis had no place in the club, but agreed to narrow the language.

Decuyper has an agenda here as well. Aside from being impeached from CRU, he and his new organization were booted out of a "Patriotism over Socialism" rally last week after Hamilton, who was speaking there, intervened, according to a report from the Phoenix New Times.

Northway declined to comment, except to point to the statement he made in the public apology in March.

During the Monday meeting, Thomas called out members of the ASU Young Democratic Socialists of America and other groups on campus for their treatment of Rev. Maupin at the March apology. Maupin, who was scheduled to appear at the meeting on Monday, was not in the video posted as of Thursday night.

Thomas said the treatment of Maupin was akin to the racist chats he apologized for.

“What I said in private was egregious, and I agree with that,” he said. “But at the same time you have the Democratic Socialists at ASU affiliated with Antifa calling a Black reverend a race traitor and other things I can’t even mention, and nothing was done about it — no articles were written about it.”

For comparison, one of the comments that led to the apology included a message where Thomas called the rapper Childish Gambino “degenerate monkey filth.”

Correction: A previous version of this story incorrectly stated Merissa Hamilton's political affiliation. She is now a Republican, no longer a Libertarian.