The effects of the COVID-19 pandemic were present on ASU's Tempe campus, with voters reporting little to no wait time at the on-campus polling location compared to the two hour wait to cast a ballot on the Tempe campus in 2018.

From 6 a.m. to 7 p.m., students, faculty members and Tempe residents showed up to the Sun Devil Fitness Complex by the hundreds to cast their ballots.

At the time of publication, voters in Arizona passed Proposition 207, which legalizes marijuana statewide. Other races were too close to call.

"Of course in 2018, in-person voting was much more of a reality," said Kapadia, a senior studying economics. But in 2020, where mail-in votes exceeded Arizona's 2016 total, wait times on ASU's Tempe campus were only 10 to 20 minutes long, voters said.

Mason Mahaffey, an out-of-state graduate student studying electrical engineering, said the main issue he looked at was a candidate's stance on climate change.

Mahaffey, who said he researches solar cells, has an interest in renewable energy and has been involved in the Sunrise Movement, said there are still opportunities to keep connecting climate activists with one another, and students "have the power to get legislation that impacts climate change." 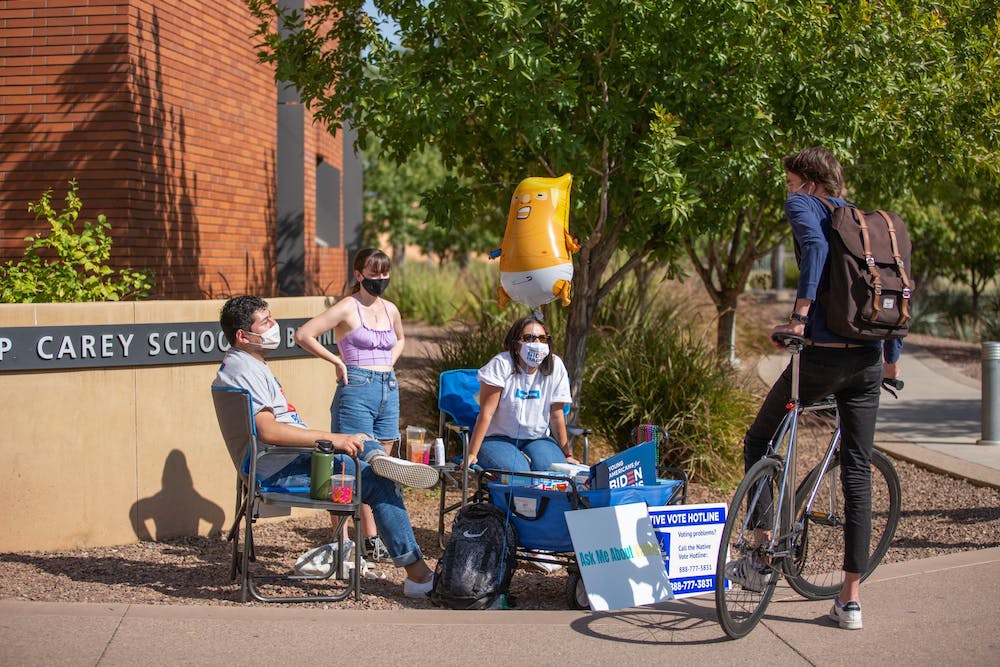 Michael Turk, a junior on the ASU football team studying liberal studies, said he waited until Election Day to vote in person because he believed it to be a more trustworthy method of voting.

For Turk, neither presidential candidate perfectly aligned with his values, but he decided to vote for President Donald Trump because they had more similarities than differences.

"I try to go off the policies, what most aligns with my worldview," Turk said. "I don't support abortion ... so that's a big one for me."

The number of in-person voters at campus polling locations remained relatively low, which Kapadia speculated was due to the "unprecedented" number of mail-in ballots from this election.

"I think that students are just opting to (mail in ballots) rather than come in person just for safety precautions," Kapadia said.

Unofficial early results in Maricopa County, which covers all four of ASU's campuses, recorded over 1.4 million mail-in ballots cast, making up over 57% of registered voters in the county.

Voters were asked to wear masks inside polling locations and use hand sanitizing stations to stop the spread of the novel coronavirus.

On Tuesday, the Arizona Department of Health Services reported an additional 1,679 cases and 38 deaths across the state, bringing the cumulative number of infections to 249,818 and deaths to 6,020.

Despite the COVID-19 concerns, Anthony Marson, a senior studying information technology, said although he had received his ballot early he went to drop it off at the polls because "it creates a sense of community" to vote in person and see other people, especially after this abnormal year.

Volunteers from both major parties stayed near the polling place, keep an eye out for signs of voter intimidation or other issues. Other political groups had members advocating for voters to reach out to friends and family and encourage them vote.

Some people provided voting guides to undecided voters regarding down-ballot races, while others handed out water bottles and candy to voters walking by. 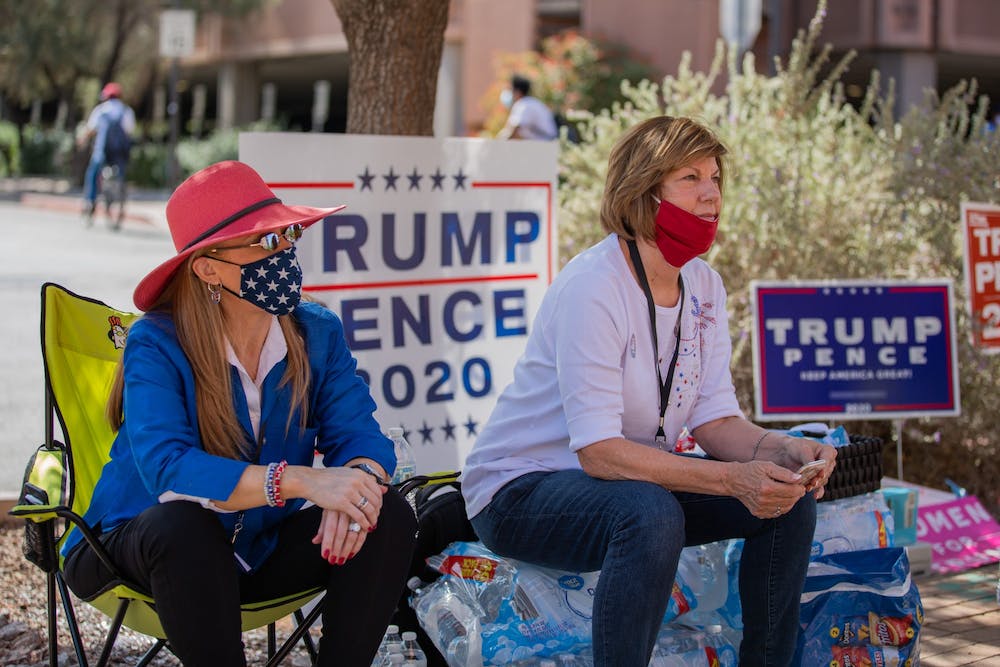 Isabel Han
The Republican Poll Observers sit by the Tempe Campus near the SDFC voting location in Tempe, Arizona, on Tuesday, Nov. 3, 2020.

In the past, USGT has hosted a "party at the polls" during the last few hours polling locations are open, where students can grab snacks, win prizes and meet their representatives in student government.

This year, instead of their usual event USGT set up a booth at the SDFC with the Women's Coalition, which was tabling to celebrate 100 years of women's suffrage, to ensure social distancing and safety measures due to the pandemic.

"Given the circumstances surrounding this election versus previous elections … we've done a good job at making sure that we're engaging with students as best as we can," Kapadia said. "I think we've done a pretty good job of increasing voter education opportunities."

In the evening, students from Tempe High School's mariachi band began to play music outside of the polling location.

This election impacts the high school students too, said high school sophomore Graciela Molina, so they wanted to do something to participate in it.

Erin Galindo contributed to the reporting of this article.