Tempe City Council passed a resolution to accept the memorial funds to plant trees in memory of landscape architect and former ASU lecturer Kevin B. Moore

Kevin Moore cared about much of what gives life meaning — people, the environment and animals, friends said. Consistently involved with the North Tempe community, Moore connected with people in significant ways.

“If you ever met Kevin, he was a really kind soul and everybody that worked with him or met him really liked him. He’s just a really down to earth person, and you could really tell that when you talked to him. He wasn’t a phony about it,” said Greg Swick, Moore’s business partner of 30 years.

So when Moore passed away last September due to a relapse in stomach cancer, his community wanted to celebrate his life and work through the creation of the Kevin Moore Memorial Fund. After raising $16,220 in donations, the memorial fund was handed to the city of Tempe.

Resolution No. R2021.33 allows Tempe to accept the money raised from the 78 donors and disburse it for the “installation of three salvaged specimen trees, irrigation connections, and a monument plaque explaining the significance of the area.” The Tempe City Council passed the resolution unanimously in a virtual council meeting on Thursday.

“The Ironwood trees will honor his life, provide habitat for native birds and animals and shade a gathering area within the park he helped design. The funds will go to providing irrigation, planting and maintenance to establish three large box trees,”  Diana Kaminski, senior planner for Tempe, wrote in a GoFundMe update in December. 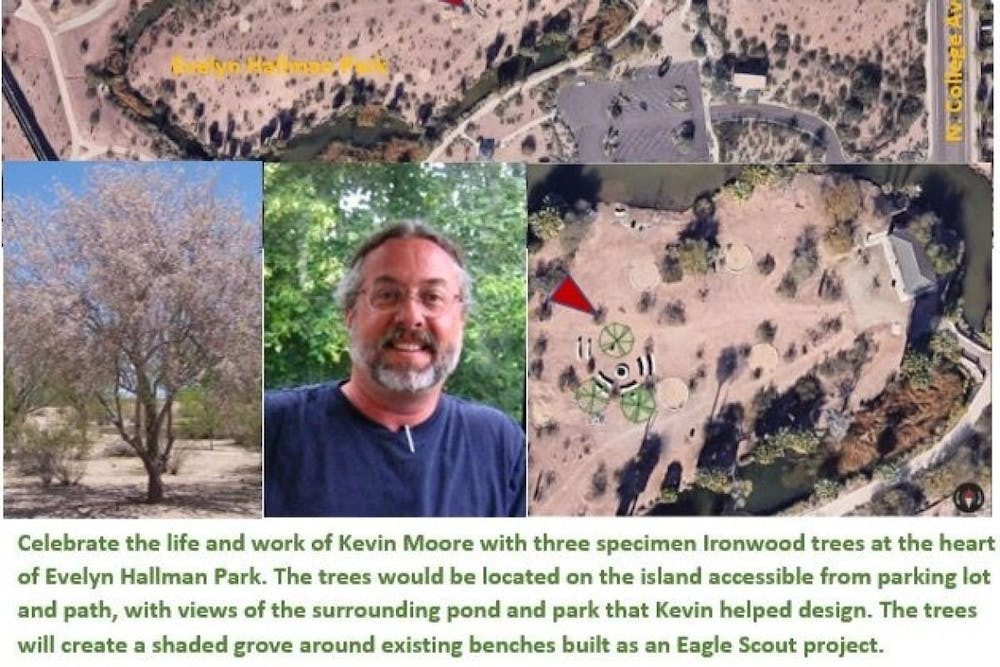 After having been in remission for two years, the cancer returned in the beginning of 2020, Swick said.

Although the initial campaign was to plant one tree, Kaminski established a GoFundMe account last October to raise money for a monument plaque and two additional Ironwood trees at the entrance of Evelyn Hallman Park for a total of three trees and an irrigation system with the support of matching funds from a donor.

Jeff Homan, owner of Phoenix-based plant nursery and tree relocating company Native Resources International, agreed to donate one of the trees. The company will be sourcing, delivering and installing the three trees.

“Kevin and I have known Jeff since we got out of college, and when he heard that Kevin had passed, he called me up and I had mentioned what we would like to do and that we would like to pick out a nice tree, and he said he’d donate one of the trees,” Swick said.

Moore was involved with North Tempe's residents, as he provided pro bono consultations for neighborhood associations looking to design parks and landscapes with desert plants. Moore fought to keep Evelyn Hallman Park natural, like a walk through the desert.

“Evelyn Hallman Park was one of our projects, and he worked with the neighborhood community over there and also the city," Swick said. "And the neighborhood just loves him; they can’t wait to have a memorial for them over there."

The trees will form shade for benches that were previously installed as an Eagle Scout project a few years ago. The park’s design reflects his care for people, the environment and animals, Swick said.

“It’s going to be over on the island Evelyn Hallman Park where a group of Eagle Scouts took the recycled concrete from the park and actually formed benches and a fire pit over there. Kevin helped them with that project,” Swick said.

Originally, it was Moore's interest in the Sonoran Desert that led him to work alongside a team of cancer survivors and researchers on the ASU Biodesign Cancer Garden of crested cacti. Caspian Robertson, an internationally renowned garden designer from Surrey, England, designed the garden with help from the MOORE / SWICK partnership and Trueform, a Phoenix-based landscape architecture studio.

“Kevin was a wonderful human being and an essential part of the crested cactus garden — Endless Forms Most Beautiful — that we collaborated on at ASU Biodesign," Athena Aktipis, an associate professor in the psychology department at ASU, wrote in an email. "We created this garden to raise awareness about the pervasiveness of cancer and also give hope for new ways of managing cancer to support human life.”

The cancer garden project team chose to plant cacti for the garden, given that some of the cell division processes that lead to the plants' structural oddities are the same processes that create cancer in humans. The project was important to Moore following his first bout with stomach cancer.

“Kevin had learned to live with his cancer, though in the end it tragically took its toll. He will be dearly missed. The planting of these trees in his honor is a wonderful gesture in his memory,” Aktipis said in an email.

The proposed installation and celebration of Kevin’s life and work was scheduled for Arbor Day on April 30, but Kaminski wrote in a GoFundMe update that due to the pandemic and poor selection of salvage stock trees, the planting and dedication is postponed until the fall.

Until then, the funds will be turned over to the Tempe Parks Department for the installation and irrigation of the trees.