With access to the Hasbrouck Insect Collection in-person and online, students and researchers evolve their love for bugs

The wooden drawers look modest at first. With a light pine stain, a metal handle and a small, metallic framed label, they sit stacked in seemingly endless rows and columns.

But to open any one of the drawers is to unlock a microcosm — a cosmos of colors, patterns, eyes, wings, antennae, abdomens and thoraxes, all pinned in neat, white boxes.

The Hasbrouck Insect Collection at the School of Life Sciences flourished from a small research depository to a menagerie of over 2 million pinned insects.

"It's like a hidden treasure," collection manager Sangmi Lee said.

Housed in a quiet building about two miles from campus, ASU's biocollections camouflage into the surrounding office plazas and industrial parks.

The Hasbrouck Insect Collection sits behind a glass-encased lab right around the corner from the entrance.

Past the microscopes and lab tables, large, safe-like containers hold 2,800 drawers of pinned insects. Holdings at the collection cover at least 25 orders, 390 families, 3,500 genera, 12,000 species and 1,240 subspecies of hexapods.

Moths, butterflies and beetles are among the most well-represented. But all specimens vary vastly in appearance, size and species.

Some particularly captivating specimens include holographic beetles, reflective sapphire butterflies, moths with hypnotizing six-eyed wings, and specimens so small they fit on top of a pin.

Prior to 2011, access to the collection was tough to come by without at least a graduate-level grip on entomology. But now, it's open to anyone.

Lee became collection manager in 2012. She oversees day-to-day operations and works closely with students, volunteers, researchers and visitors to ensure there’s enough bugs to go around. 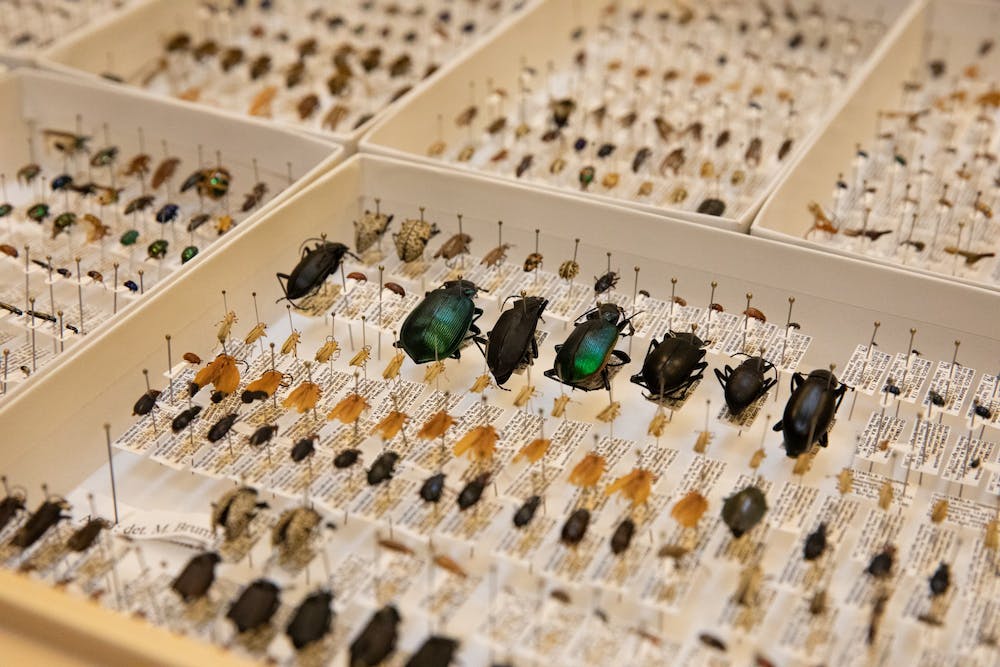 Now, around 40 staff, students, volunteers and other researchers work with the specimens and data on a weekly basis.

Lee has even pinned Polaroid photos of past members involved in the lab on the side of a filing cabinet outside her office, each name handwritten on the bottom.

Since the collection opened its doors, Lee has seen greater research and community outreach opportunities. It's also given undergraduate entomology students the chance to work one-on-one with specimens, some dating back decades.

He got into entomology after owning arachnids, isopods and millipedes as pets and continues to grow his knowledge and interest in insects through working in the lab.

And those in the lab are just the start. The collection welcomes visitors ranging in age from five to 75 through community outreach events.

"People are really afraid (of) the insect, especially when they see the live ones," Lee said. "But after they see them preserved in the collection, they look at them and know that they are one of the beauties in the world." 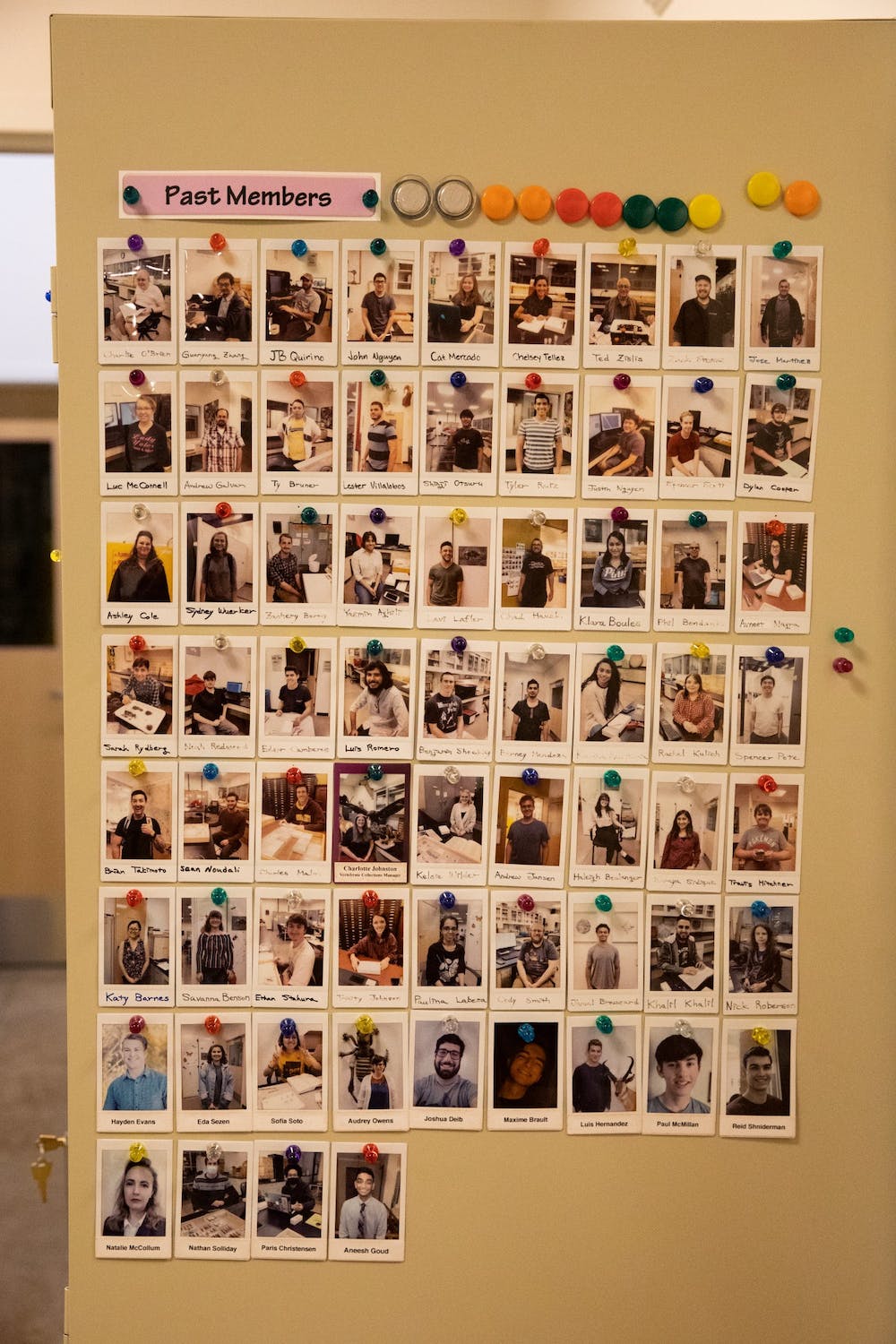 Sangmi Lee, the collection's manager, keeps polaroid photos of past participants in the lab.

Nico Franz, curator of the collection, made undergraduate and community access his main goal when he took the position in 2011.

Under his curation, the collection continues to grow steadily through varied projects and interactions. And at 2 million it's come a long way from where it started.

The collection started sometime in the 1910s and slowly grew to around 50,000 specimens over the next fifty years.

He and teams of faculty and students often set off into the desert to hunt for new fauna and focused the brunt of their efforts on finding and cataloging species from the southwestern U.S. and northern Mexico.

They also expanded partnerships with entomologists both inside and outside the University to bring in more findings.

Over 22 years, Hasbrouck and his team grew the collection 13-fold, bringing in around 650,000 specimens.

Around 1990, the collection stalled as efforts turned to cataloging. New specimen additions were sparing and sporadic until 2017 when Charles and Lois O'Brien, two entomologists, donated their private collection of around 1.25 million specimens to ASU.

The donation doubled the size of the Hasbrouck collection, bringing the total to around 2 million, though the O'Brien collection is recognized as its own entity.

Researchers at the lab continue to follow in Hasbrouck’s footsteps and set out on collection trips to find new specimens.

The most recent trip in early September took students, researchers and community members to the Patagonia Mountains in Coronado National Forest to look at the explosion in insect populations after this summer’s particularly wet monsoon season.

Surprisingly enough, going out into the field, or even into the lab, is no longer necessary to see and engage with insects. The trend of accessibility continues as the collection goes digital through two platforms.

SCAN, or Symbiota Collections of Arthropods Network, hosts over 200,000 individual specimens and 10,000 species from the collection. Each listing contains a photo, the species, and information on when it was collected, where it was collected and who collected it.

About 98% of the uploads include precise coordinates. Franz said location data leads to both historical as well as dynamic snapshots and dashboards of where insect species occur, and how their distributions respond to global and regional change.

"They're able to interact with our collections and with this data just from a laptop connected to the internet," Johnston said.

Accessibility becomes especially important when tracking what entomologists are calling the "insect apocalypse," or the swift decline of insect populations globally.

Experts from around the world are urging action against the biodiversity crisis, largely brought on by climate change and pollutants.

"We seem to be losing massive amounts of insects," Johnston said. "It is incredibly important that we document this, that we preserve things while they are here."

The process of digitizing a specimen takes a little over a half an hour. Digitizing is primarily done by researchers, volunteers and paid student workers.

First, they pull out a drawer, pick a specimen and write down information on each individual label.

The cataloger then starts the time-intensive process of readying the bug for their close-up. Because the subjects are often small or even micro, it takes specially trained foci and lenses to capture the entirety of the specimen.

Johnston said this is one of the biggest constraints they face in digitizing the collection. He hopes technology and automation will catch up with the need sooner rather than later.

"If we didn't have to spend so long digitizing these records, two or three of us could go out and collect another 50,000 specimens a year and we could grow even more," Johnston said.

"It's not hard to go out in the field with experts and collect and bring things into the museum, but how do we make that data available?"

Johnston estimates they grow at around 50,000 specimens per year. They've totaled around 220,000 but it only puts the database at around 10% of the collection.

But despite slight time hang-ups, researchers and digitizers remain undeterred and driven by passion.