Women artists across Arizona came together for the third annual Indigenous Women Rising Art Show Tuesday at the Memorial Union — an event they said strengthens the bonds of the Indigenous community.

The event, organized by ASU's Alpha Pi Omega Sorority, is a continuation of the University's Native American Heritage Month, which includes different events to showcase Native American cultures and traditions.

All four of ASU’s campuses are located in the Salt River Valley on the ancestral lands of Indigenous peoples, though the University “acknowledges the sovereignty of these nations and seeks to foster an environment of success and possibility for Native American students and patrons,” according to its website.

“Throughout the past 500 years, the impact of colonialism has been detrimental to Indigenous lands and languages affecting their livelihood,” said Catalina Alvarez Flores, a student studying family and human development and anthropology and a speaker at the event. She said organizations normally submit events throughout the month on subjects like art, music, culture, social work or social issues.

“We’re thankful for ASU Indigenous student community which consists of over 3,500 strong staff and alumni who continue to thrive, educate and advocate for the strengthening of Indigenous ways of life,” Alvarez Flores said. 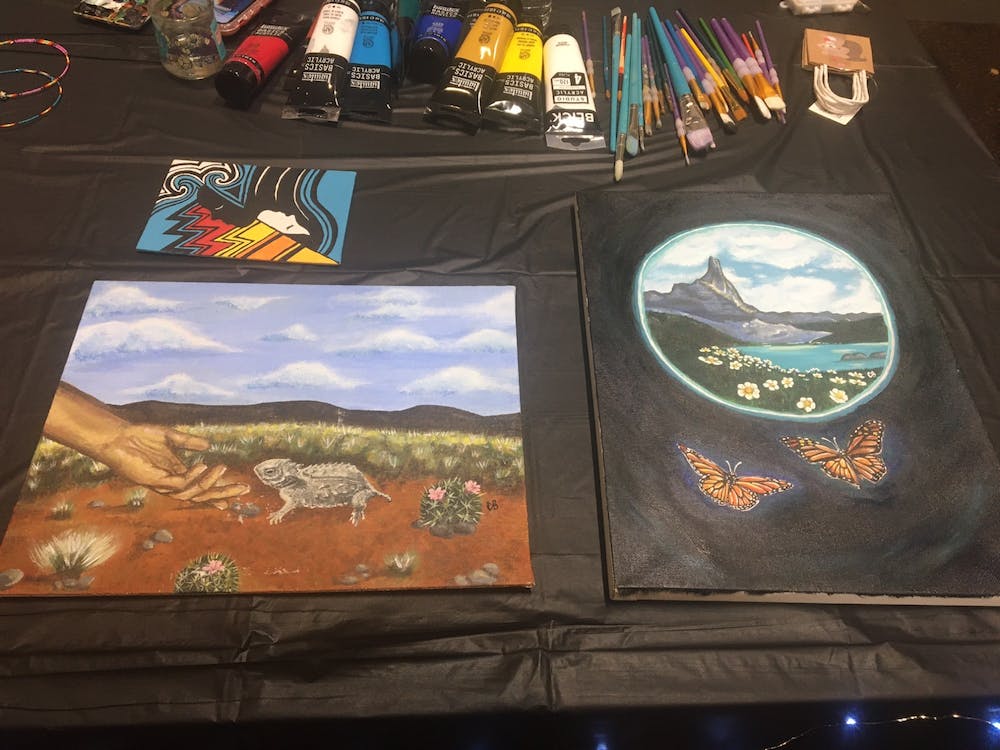 Artwork created by Caitlin Begay, of the Navajo Nation, sits on display.

Many artists' designs were unique to the style of their tribe.

“We’re from the Hopi Tribe which translates to ‘peaceful people,’” said Laina Hill, one of the artists. “Our designs come from life and growing our fields and crops and whatnot. A lot of my designs have corn or life symbols.”

Others' designs were an effort to incorporate elements from all Indigenous tribes into one.

“So, I try to make my work more inter-tribal and by inter-tribal, that's another way of saying international with Indigenous tribes,” said Ah'sha Notah, a student studying American Indian Studies. “I want to try and get some sacred ornament from every nation within the United States. So that way, it can appeal to every nation.”

Whether each individual's work was a tribute to their tribe or toward Native American culture as a whole, a similar message echoed throughout.

“There’s a lot of commonalities between Indigenous art,” Alvarez Flores said. “It just shows how together we are and how connected we are as Indigenous people and also just continuing to showcase our culture and that we're still here and that we're not some people of the past.”

Students, as well as the general public, can find more upcoming events for Native American Heritage Month on ASU’s website. The University also boasts year-long events hosted by any one of its at least 16 organizations dedicated to Native American students.