As ASU expands into Mesa, some residents worry about what could be lost

When Bruce Nelson, an actor, filmmaker and historian of the Washington-Escobedo Heritage Neighborhood in downtown Mesa, first heard about ASU’s film school named after Academy Award-winning Black actor Sidney Poitier coming to Mesa, he asked why.

Nelson heard the school was incoming via a new building complex, the ASU at Mesa City Center, but struggled to see the precise connection between Mesa and Poitier.

Given the Washington-Escobedo Heritage Neighborhood's complex and storied history of prominent community members and racial segregation, Nelson said he is hoping for something through the school to honor the community right next door.

“I’ve talked to a few filmmakers that I know and artists that I know, and they kind of had the same reaction, like, ‘Okay, that's great to do that. You know, what kind of programming? Don't just give it the name,’” said Nelson, who directed a documentary about the Washington-Escobedo Heritage Neighborhood titled "North Town."

The development of ASU at Mesa City Center, set to open for classes in Fall 2022, has raised multiple concerns among residents and politicians, from payment to gentrification and honoring nearby communities.

The campus will enroll students in a Bachelor's of Fine Arts in film and media production, as well as three graduate programs centered around extended reality and alternate reality technologies.

Plans for the nearly 118,000 square foot building had been circulating since a proposal for the development was voted on and struck down as part of a sales tax package in 2016, but the Mesa City Council voted to approve a new but similar proposal in 2018. The facility is located just off of East Main Street on North Centennial Way, just south of the Heritage Neighborhood.

ASU will also operate the first floor of the Innovation Studios space, formerly the Mesa City Library, as part of the expansion into downtown Mesa. The space, separate from the 3-story academic complex, is designed to help businesses and local entrepreneurs. It will be managed through a partnership with the J. Orin Edson Entrepreneurship and Innovation Institute. 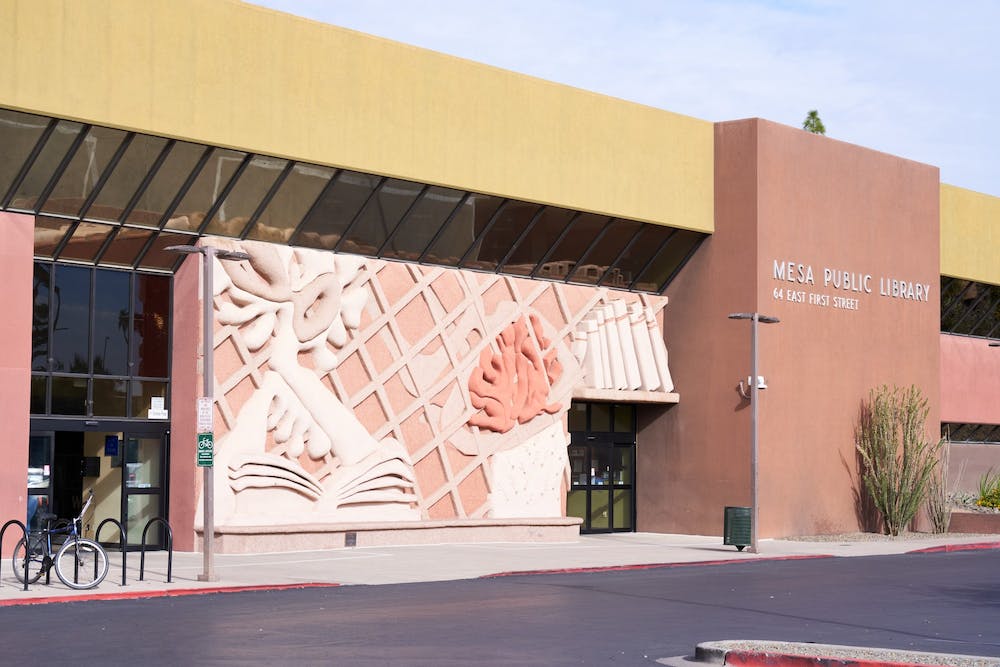 The entrance to Mesa Public Library is pictured on Wednesday, Dec. 8, 2021 in Mesa.

Nelson isn't opposed to the new campus's opening, but he does worry the rich history of Mesa, especially in film, could be left behind.

The University has conducted some community outreach in Mesa regarding the project, according to ASU spokesperson Nikai Salcido.

“Not everyone takes advantage of that in a planning stage, so as the building has been under construction, our community engagement team has continued to meet with community leaders and community members with strong ties to the surrounding areas, including the Washington-Escobedo neighborhood," Salcido said in a written statement.

Jake Pinholster, founding director of ASU at Mesa City Center and associate dean for enterprise design and operations in the Herberger Institute for Design and the Arts, said the community engagement team conducted around 100 interviews with community members living near the new facility. The results from the interviews were condensed into a 72-page report and used to develop an advisory council that is still meeting, Pinholster said.

Johanna Richards, the program manager for ASU at Mesa City Center, said many people reacted positively about ASU coming to Mesa, but affordability was a common theme in the interviews and report.

"I was really surprised to hear people were saying like, 'We want to make sure that we're not displaced,'" Richards said of ASU's outreach. "There's no specific project related to that (through ASU). But that is heavy on our mind."

Despite the outreach, some residents and an expert worry about how the new ASU campus will shift life in the Mesa community.

A concern of gentrification

Oscar Mancinas, a graduate student in transborder studies who was raised in the Washington-Escobedo area, said he hasn’t seen much community engagement from the University. He said he was aware of some outreach efforts to communities in Mesa, but most of them were surveys over email after the development was finalized.

“What a grand irony it would be if a school named for such a significant Black artist and civil rights figure, inadvertently or directly led to basically a tougher living situation for one of Mesa’s most historic Black communities,” Mancinas said.

Part of the community's apprehension about ASU's new development stems from the fraught history between the city and its residents.

"Two words that make a lot of Mesa city officials cringe is 'Site 17,'" Mancinas said, referring to an area near University Drive that was seized by the city through eminent domain. Sixty-three homes were destroyed in 1992 in the hopes of redeveloping the area, but the redevelopment never came.

Growing up, Mancinas said the area remained empty and served as a reminder that "sometimes, the communication and the coordination between residents in this area and those who are those in power just isn’t as clear and equitable as it could or should be."

A new project named Transform 17, which was approved in April, will look to create "a wellness-oriented development with residential, office and commercial uses" at the location.

According to a statement from the city of Mesa provided by Kevin Christopher, a Mesa spokesperson, "ASU has committed to working with all our downtown neighborhoods to ensure their inclusion in the project and they have a dedicated full-time outreach coordinator to facilitate community engagement."

Having ASU present in the planning of a redeveloped downtown Mesa "was something that (the city) very much wanted to happen," said Rick Naimark, ASU's associate vice president for program development planning.

Naimark said ASU has experience working with cities to bring campuses to new areas, such as the Downtown Phoenix campus, which opened in 2006.

But making Mesa more like downtown Phoenix could do more harm than good, said Sujey Vega, an associate professor in the School of Social Transformation and faculty lead of American studies.

“I've seen cases in the past where obviously gentrification happens and people feel like they have no say in what's going on, and they're quickly outpriced and kicked out of their neighborhoods,” Vega said. “But having a collaborative embedded purpose, community-engaged purpose, will be critical going forward.”

Concerns over how the project would be paid for

The debate over the introduction of ASU to downtown Mesa has also raised concerns in its city council over who would pay for the project.

Mesa Councilmember Kevin Thompson said he opposed the approval of the building complex because building the ASU at Mesa City Center complex was not what his constituents originally wanted.

“The voters spoke in 2016 on the ballot and said we do not want to build an ASU facility in our downtown using taxpayer funding,” Thompson said. Mesa City Council then approved the building in 2018 with a 5-2 vote, with Thompson and former Councilmember Jeremy Whittaker opposing it.

READ MORE: ASU to expand in downtown Mesa, despite voter opposition in 2016

Whittaker, current president of Velocity Technologies, said his concern about the project was centered around who was paying for it.

“That was one of the biggest issues I had was like, why are the poor and the middle class footing the bill for somebody like ASU?” Whittaker said.

According to a downtown Mesa webpage, the entire project costs $73.5 million. ASU will pay $10 million, an additional $10 million for an interior build-out and around $1.3 million per year for operations, while the city of Mesa will pay $63.5 million.

Mesa does not have a primary property tax, differing from most Valley cities. Portions of the city’s utility revenue are transferred from an enterprise fund to the city’s general fund instead, going to pay for public safety, parks and other services.

According to Mesa Mayor John Giles’ website, the current plan for funding the ASU building involves an economic development fund that reinvests funds from land sales, sales taxes and building permits from large commercial projects, not the enterprise fund.

Giles did not respond to requests for comment from The State Press.

Vega said it's important to make sure that as ASU grows into Mesa, the services and resources for residents grow with it, ensuring they are not displaced by the new development.

Programs that engage with local students from middle schools or high schools could begin to foster a more collaborative relationship between ASU and the community, said Nelson, the historian of the Washington-Escobedo Heritage Neighborhood.

Richards, the program manager for ASU at Mesa City Center, is working with a team of community consultants to help arrange community events for the public at the campus.

Pinholster said among other projects, ASU will be partnering with Mesa Public Schools to bring in high school students to work on game design and film and media projects with ASU faculty and students.

Nelson also suggested something honoring William Menhennet, the man who he said “brought the film industry to Mesa,” would be appropriate. Menhennet, a late Mesa resident, opened The Nile and the Mesa Coliseum theaters in the city.

“(History) is not just so much in the distance that you would like to believe,” Nelson said. “So I think it's important you know your history; you can move in the future with confidence.”