On the fourth day of the strike, 20 students gathered at the Arizona State Capitol with the hope of moving the Freedom to Vote Act forward

Students from Arizona universities spoke with Democratic Sen. Kyrsten Sinema Thursday on the fourth day of their indefinite hunger strike called AZ Youth Hunger Strike for Democracy, with the hope of moving the Freedom to Vote Act forward.

Twenty students joined the strike that began on Dec. 6 in the Rose Garden of the Arizona State Capitol. The group is part of the nationwide Un-PAC, a non-partisan group working to reduce the role of money in politics. The group also has a campus presence through Un-PAC @ ASU.

The group of students, five to 10 of which are ASU students, hopes to get the Freedom to Vote Act passed before the end of the year. The bill would protect elections from voter suppression, gerrymandering and dark money along with other actions, such as making election day a national holiday and allowing automatic and same-day voter registration.

All eyes have been on the Arizona senator as she has supported new voting rights legislation, but has opposed changes to the filibuster. While those on strike said Sinema was in support of them, it is unclear what this means for the Freedom to Vote Act.

"Our meeting with Sinema was great," said Leila Winbury, a junior studying political science. "She did say that she wanted to continue the dialogue (and) she did make it clear that she supports us."

The group started the strike with the hope they could speak with Sinema and President Joe Biden about moving the act forward. The group spoke to Sinema on Thursday in a virtual Zoom call, but it has yet to hear back from Biden's office.

"The fact that it's not going through because (of) our roadblock(s) being Sen. Sinema and President Biden, it's just not OK," said Michaela Schillinger, a sophomore studying political science. "The majority of our country wants this to pass and you should be representing the constituents."

According to research from Navigator Research, more than half of Americans support the Freedom to Vote Act.

"This is a bill that will protect the voting rights of all Americans," said Leo Cevallos, a senior studying applied biological studies. "Time is running out, we need this to pass now before it's too late."

In the press conference Thursday, those on strike were joined by veterans and the Valley Interfaith clergy who offered support and prayers to the group.

"We say today, as Arizonans, 'We are hungry too,'" said Rev. Katie Sexton-Wood, the director of the Arizona Faith Network. "All of us gathered are hungry; hungry for justice, hungry for our lawmakers to stand up to protect our cherished right to vote." 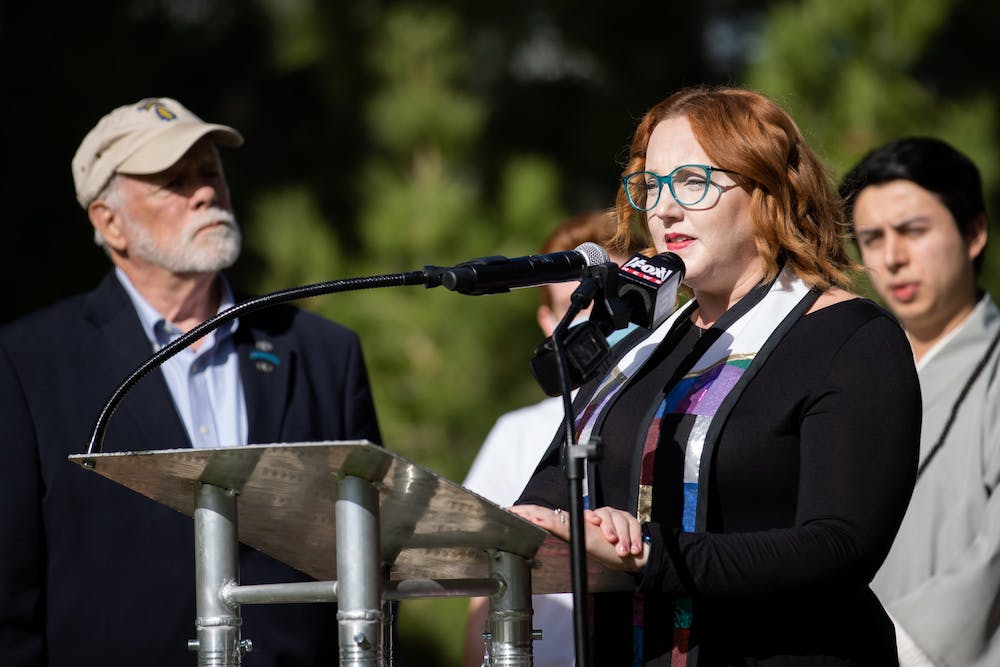 Rev. Katie Sexton-Wood speaks outside the Arizona State Capitol in Phoenix on Dec. 9, 2021.

"I am feeling very empowered and resilient," said Brandon Ortega, the head director at Un-PAC @ ASU and a junior studying political science. "Sen. Sinema was very supportive of what we are doing and I think she has a better understanding of how committed we are to this hunger strike."

With the strike on its fourth day, the students on strike said they were beginning to feel some emotional and physical effects, with the second and third day being the worst so far.

Cevallos said the physical effects ranged from hunger pangs, tremors, low blood pressure, pains, headaches, general discomfort and tiredness. But for the students, the physical pain they are in is worth the sacrifice.

"We are sacrificing our own bodies and putting our bodies on the line because this sacrifice is of less consequence than the inaction that is happening," Schillinger said.

Strikers were provided with wheelchairs, which most of the students were sitting in during the Thursday press conference. Doctors and medical professionals are checking the vitals of strikers every day.

With it being finals week, students like Winbury completed final exams while striking in front of the State Capitol. "Doing finals on the lawn kind of kicked my butt," Winbury said. "I'm feeling really exhausted today."

Despite the physical effects of their demonstration, those on strike are still feeling motivated as morale is high in the group.

"We feel ready, we feel inspired, we feel motivated, we are making a difference," Cevallos said.