Ducey announced plans for K-12 schools, water, the border and state budget but directly referenced the pandemic only three times

Gov. Doug Ducey laid out his priorities for the year in his eighth and final State of the State address on Monday, but he did not address COVID-19 cases spiking across the state.

During his address, the governor celebrated his accomplishments and announced his plans for the budget, tax cuts, water, infrastructure, K-12 education, policing and border issues. Ducey directly referenced the pandemic three times.

Unlike last year's address, which was presented virtually, Ducey gathered in the House of Representatives in-person with lawmakers as they started this year's legislative session with no COVID-19 restrictions.

Cases in Arizona are currently at the highest they have ever been as almost 18,000 cases were reported in one day on Jan. 4, breaking the previous record of around 12,000 cases reported just a year earlier on Jan. 4, 2021.

Almost 14,000 cases were reported on Monday.

From what Ducey did mention of COVID-19, he said "nearly 100% of citizens 65 and older (have) at least one dose of the vaccine." 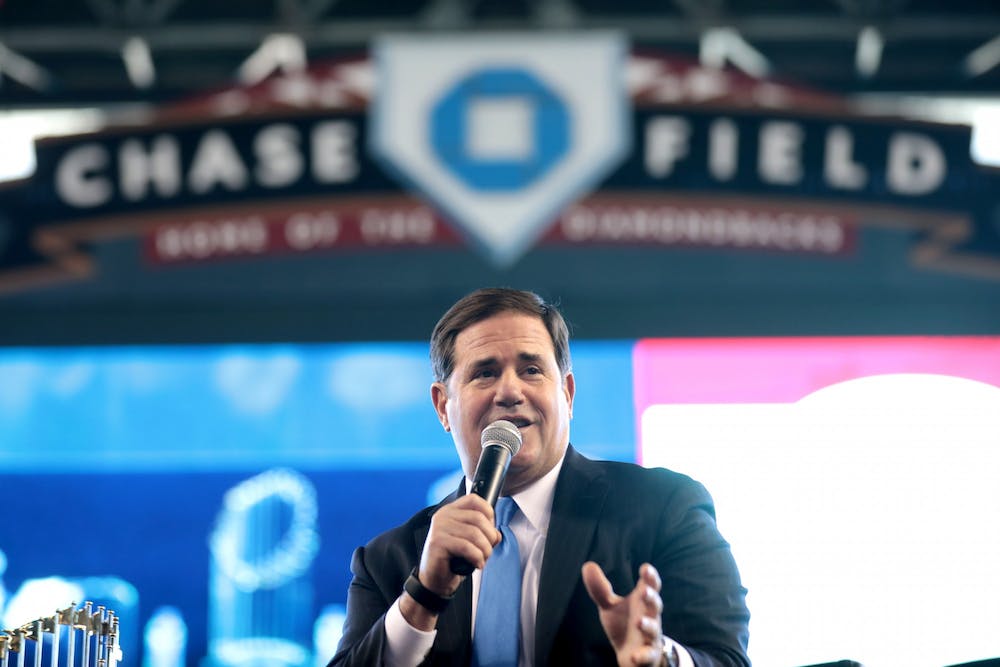 Gov. Doug Ducey speaks with attendees at the 2022 Legislative Forecast Luncheon hosted by the Arizona Chamber of Commerce & Industry at Chase Field in Phoenix on Friday, Jan. 7, 2022.

"There's no denying what's happening on a national level is straining families and seniors' checkbooks," Ducey said. "Washington's spending spree, combined with mismanagement of COVID has broken our supply chain and inflated the cost of everything."

Ducey spoke about policies for school choice, which allows parents to choose a schooling option that fits their child's needs with increased options like charter schools. School choice in Arizona became prominent during the pandemic as parents took their kids out of public schools that went remote or attempted to require masks.

"There has been too much attention put on masks and not nearly enough attention placed on math," Ducey said. "A focus on restrictions rather than reading and writing."

In April 2021, Ducey rescinded the order for K-12 schools to require masks in classrooms. He signed an executive order later in June that said universities and community colleges couldn't require masks and testing.

"Under the G.I. Bill, (veterans) also get to attend our in-state universities and community colleges free of charge. After all, they’ve already given so much," Ducey said. "But how about their spouses? These dedicated husbands and wives have served and sacrificed as well."

"ASU, NAU and UA are confronting the biggest challenges of our time, whether ensuring healthy forests, identifying water efficiencies or developing the next generation of teachers for Arizona classrooms," Manson said in the statement. "None of this is possible without the continued support of Governor Ducey and the Arizona Legislature."

It is important to provide everyone in the community access to a college education, Ducey said.

"Whether your top issue is workforce or rural jobs, this is the way to do it," Ducey said. "Our budget makes historic investments into community colleges to empower our people with a quality education and the skills of the future."

Ducey said "the goodbyes will come later" as he spends his last year as Arizona's governor focused on his "ambitious agenda," which he said included "protecting life in every way possible."

"As you see, as much progress has been made, there's plenty left to do on so many fronts," Ducey said. "Let's recommit today to giving our all to getting the job done for the people who have hired us."