Marching to the Fulton Center, student protesters chanted 'sexual assault has got to go,' and demanded more and better resources

Around 40 protesters, most of them students, gathered at the Sun Devils Against Sexual Assault protest on the ASU Tempe campus Thursday to demand better services for sexual assault victims.

The protest started at the Nelson Fine Arts Courtyard and ended at the Fulton Center, where ASU President Michael Crow's office is located. Protesters had three main demands: reimburse legal fees and therapy costs for a victim of sexual assault at ASU, meet with Crow to discuss SDASA's demands and have more violence prevention staff and non-police victim advocates.

SDASA, a support and advocacy group for sexual assault victims not affiliated with the University, has been working on and advocating for several projects surrounding sexual assault on campus, including the Campus Assault Advocacy, Resources and Education Center, a proposal for an on-campus resource center to support sexual assault survivors.

A December 2020 investigation by The State Press found rape to be the most common violent crime at Arizona's three public universities. Records showed not a single rape case from 2017 to 2019 investigated by campus police was prosecuted at the county level. Data show ASU's Police Department clears rape cases at a lower rate than the national average. 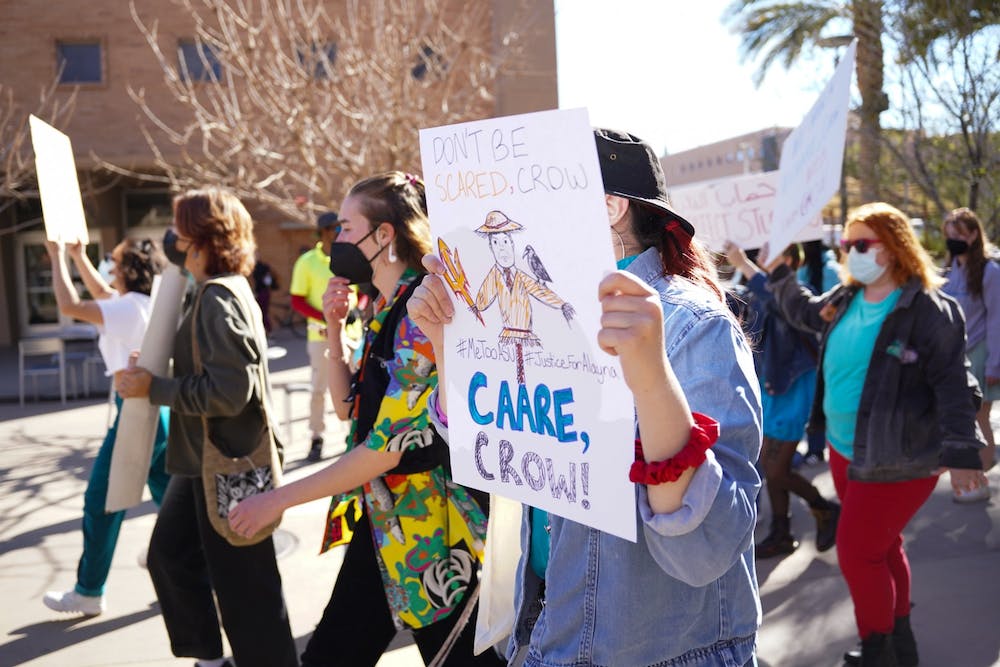 Protesters march past the Memorial Union at the Sun Devils Against Sexual Assault protest, on Thursday, Feb. 17, 2022 in Tempe.

While marching through campus, protesters chanted "ASU needs to know, sexual assault has got to go" and "CAARE Center now." Students spoke in front of Old Main about their experience with sexual assault at ASU and the subsequent reporting processes with ASU services and administration.

"The rape culture and silencing that I experienced 10 years ago is still alive and well, as evidenced by a history of scandals, lawsuits, federal complaints and more than 80 survivor stories," Jasmine Lester, an ASU alumna and founder and director of SDASA, said in a speech at the protest.

Miranda, a junior studying biological sciences, shared her story of being assaulted as a freshman on campus. Her last name is being omitted to protect her privacy. "I walk around everyday in fear that I'll see him and that he'll do something to me or someone else. That shouldn't be my college experience," she said.

Alayna is a former communications student at ASU who went public with her story in 2020 about her on-campus rape and reporting experience. Alayna's last name is being omitted to protect her privacy. Alayna has spent almost $10,000 on a lawyer working to make sure her case, which began in 2020, was investigated thoroughly by the ASU Police Department. Alayna attended the protest but was not one of the speakers.

SDASA has been pushing to meet with Crow for several years, but a meeting has yet to happen.

"(Crow) still refuses to meet with us about this, but at least he's responding to our emails now when he didn't used to," Lester said.

The protesters demanded more violence prevention staff and non-police victim advocates. Two ASU victim advocate positions have transferred from ASU PD to ASU Counseling Services after they became vacant on Jan. 10. Students have been campaigning for the move since 2018.

An assistant director who also acts as a victim advocate will join ASU Counseling Services, said Aaron Krasnow, the director of counseling services. The department wants to involve interested students in the hiring process. 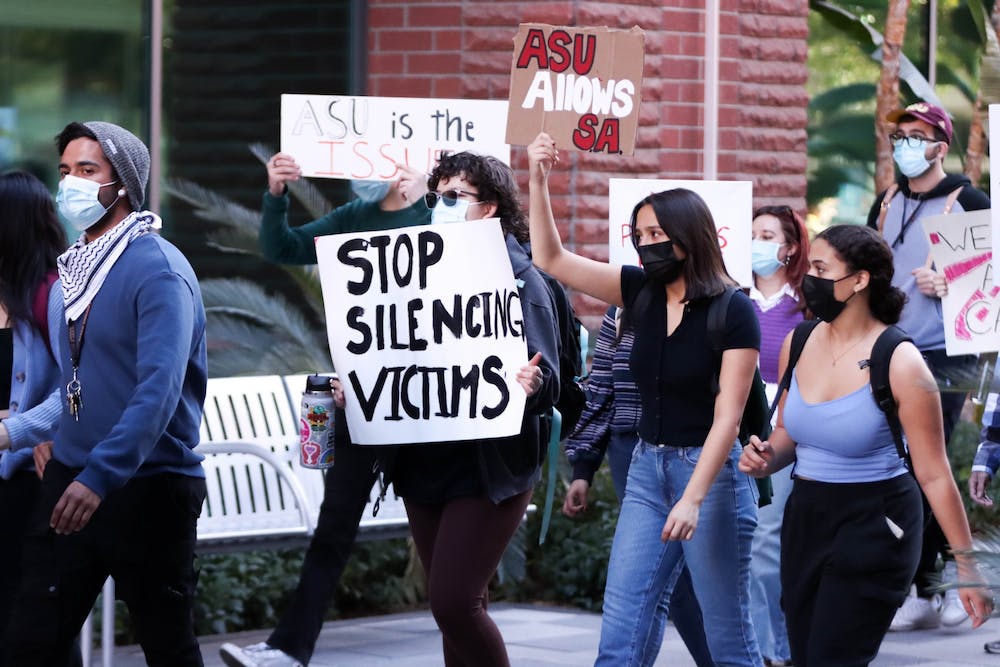 Despite removing advocates from the police department, ASU did not make a university-wide announcement or feature the new ASU Victim Services prominently on ASU websites. Two victim advocates are not enough to serve the large ASU student body, Lester said during the protest.

Krasnow said he leaned on student organizations like the Women's Coalition and SDASA to spread the word about the change.

"I can't necessarily cover all people at all times for all things, so I'm using my networks," Krasnow said. "I think particularly the Women's Coalition, Sun Devils Against Sexual Assault, others, they're tapped into the people who care, right? And they've been the strongest advocates. And so I trust them to be able to spread the word in whatever ways that they would want to."

However, Lester, who is no longer a student and does not work for the University in any capacity, doesn't believe that it is her job. "I'm not getting paid for this," Lester said. "We've been begging them to make a University-wide statement about any of this."

Kathryn Tapia, a senior studying psychology, was one of the many students who came to support SDASA and its efforts to improve sexual assault services on campus.

"It's just very heartbreaking that it keeps happening and nothing is being done," Tapia said. "There's no support for the victims especially (for) how traumatizing it is."

Tapia hopes ASU will listen to protesters and their demands, as well as victims of sexual assault.

"I just hope they listen to victims and just believe victims and hear their stories and not just lie and say that they're listening when they're really not," Tapia said. "That's more hurtful to say that they want to help but then they don't do anything at all."