Students living in the Taylor Place Residential Community on the Downtown Phoenix campus woke up to an alarm and sprinklers early Saturday morning after a fire broke out in one of the dorm rooms on the 10th floor of tower one.

The fire was caused by an electrical surge in the dorm room, which activated the water sprinkler system, according to an emailed statement from University spokesperson, Jerry Gonzalez. All residents were told to evacuate the towers and wait outside until it was safe to return.

The sprinklers "promptly extinguished the fire" and all residents evacuated the building safely, Gonzalez said.

Mary Neale, a freshman studying sports journalism who lives on the 11th floor, said she heard people running down the hallways knocking on doors, alerting residents to evacuate. Neale said students rushed down the stairs and waited outside Taylor Place while the authorities cleared the fire.

Due to flooding caused by the sprinklers, students living on the 10th floor have been relocated to the Downtown Phoenix Hampton Inn until their rooms have been completely restored. Gonzalez said in the statement there are about 30 students staying in the off-campus lodging. While there is no exact timeline for when students will be able to return to their rooms, University housing will notify them when the rooms are ready.

Gonzalez said the University is currently drying the impacted rooms and will be working with other students who were affected by the water sprinklers and will help them replace items that were damaged.

Michael and Anthony Yero, both freshman sports journalism students, were the occupants of the room that caught on fire. Michael Yero said authorities told him that his electrical razor was plugged into an outlet and caused a surge. One of the sparks fell onto a towel, which ignited and spread to his laundry.

"Its been a couple of days just figuring out what I can do and managing school and work at the same time," Michael Yero said. "It's been a busy couple of days trying to get back to normal." 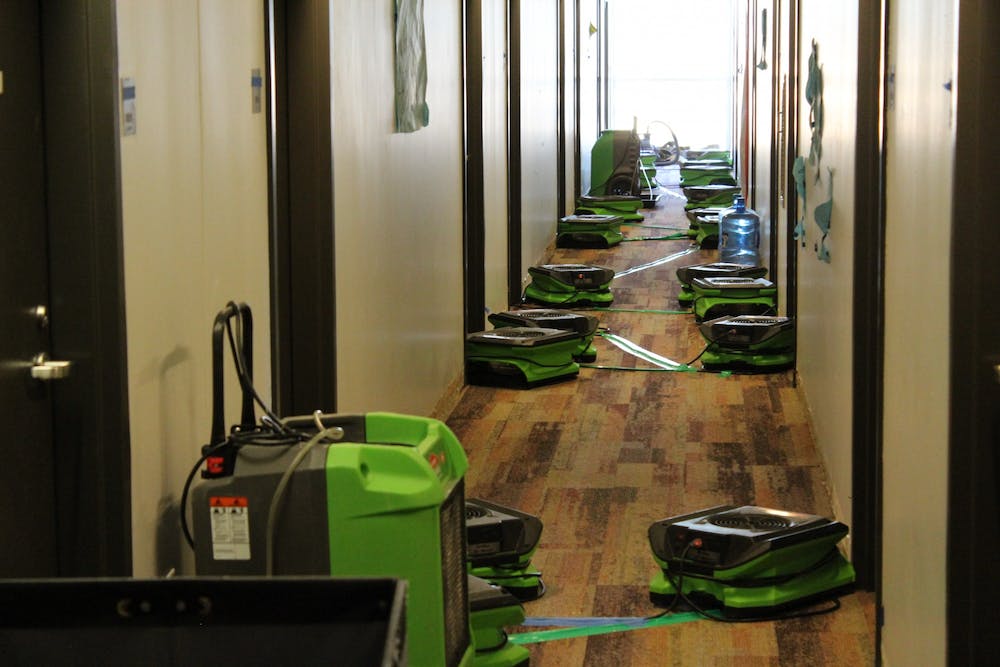 Work to clean and dry floor 10 of the Taylor Place residence hall continues on Wednesday, Feb. 9, 2022.

Michael Yero said the fire from the surge and water from the sprinklers damaged much of his and his brother's belongings including a laptop, camera, camera lenses and clothes. But even with the damages and having to move, Michael said that throughout the experience he and his brother have "tried to look at the good side of things."

He said that even when they learned it was their room that was affected by the fire, they were and continue to get through by supporting each other and doing what they can do to move forward.

"When we first heard it was our room we looked at each other and we said that we are there for each other and have each others' backs," Michael said. "We're supportive of each other throughout the whole way."

According to Michael Yero, the University provided him and his brother gift cards for essentials and will provide a stipend to replace their damaged items. He said that despite not being in his dorm, living in the Hampton Inn has been a "great time" and it has provided him the opportunity to spend more time with his friends.

"ASU has been been very helpful," Michael Yero said. "(The University) team did a great job in responding to the situation. They were very kind in giving money to help us out and accompany us and comfort us. They did a great job."