ASU's union struggles with getting recognition from administration

In the year since ASU workers founded a chapter of the United Campus Workers Arizona, the union has struggled to capture the attention of University administrators to implement change at ASU.

The group, made up of University employees, advocates for the needs of campus workers. Launched in September 2020, UCWA was established at the height of the COVID-19 pandemic. ASU joined UCWA in December 2020 and since its founding, the union has focused its advocacy on challenging COVID-related policy as the University continued to facilitate in-person instruction.

The union has published letters addressed to University administration in opposition to policies which asked students and faculty to come back to the classroom. The union has repeatedly said COVID-19 policies regulating masks and social distancing do not do enough to protect the community. The group held a protest to communicate that same message.

These efforts have gone largely unheeded by ASU leadership.

"We get lots of letters, I've seen communications from them, they've never been signed by a person. There's no name on any of these letters, of anything that I've seen," said ASU President Michael Crow said in an interview with The State Press in February, echoing similar comments he made about the union last year.

Crow said he meets regularly with the University Senate to address concerns of faculty. The Senate is "not really sure who all of these folks (in the union) are either," but Crow said he is responsive to concerns.

Jenny Brian, a member of UCWA and faculty chair for ASU's Barrett, The Honors College, said subtle, delayed responses from the administration have been common.

"Part of what we want to do is just make sure that our voice is out there, and we do know that President Crow and Provost (Nancy) Gonzales hear us and as long as we know that they've heard us then that feels like half the battle," Brian said.

Members said the union plans to continue growing its membership and presenting itself as a source of support for employees and advocate for the needs of workers. Oscar Mancinas, a part-time UCWA organizer and graduate student in trans-border studies, said recognition from the University is needed as employees struggle to stay afloat financially due in part to high inflation and rising housing costs. 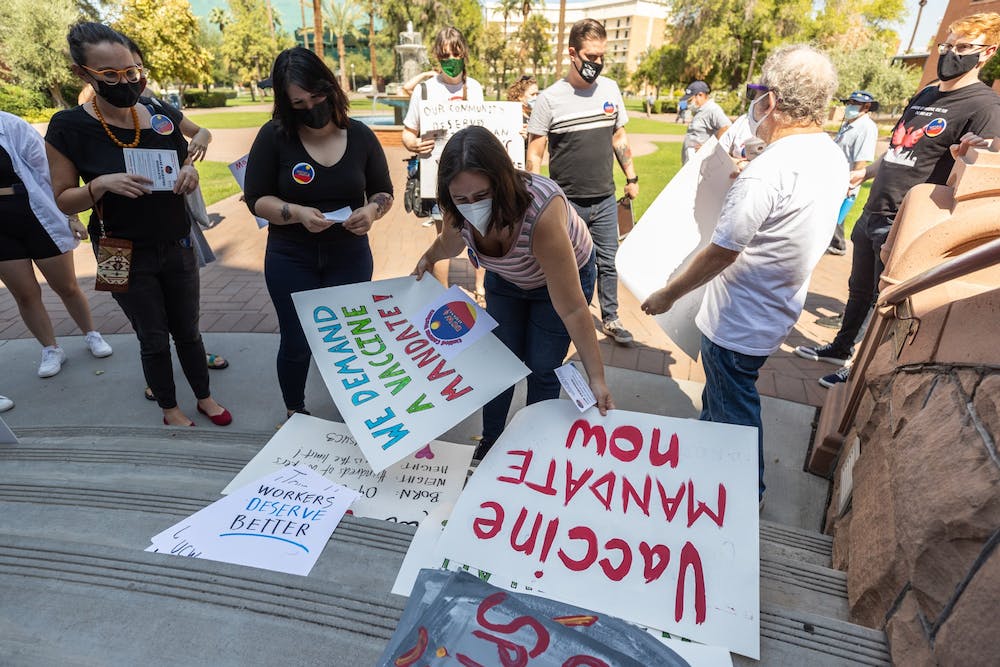 Posters being distributed to protesters on the steps of Old Main on the Tempe campus on Saturday, Sept. 30, 2021.

The federal law protecting unionization, the National Labor Relations Act, applies only to private employees. Under the NLRA, private employees are granted the right to collectively bargain, or negotiate working conditions, with employers. In right-to-work states, including Arizona, private employees cannot be fired for refusing to join their union.

Michael Selmi, a professor in employment law and discrimination, said this means employees at private universities are legally protected when they go directly to their administration to negotiate working conditions, while public university employees are not.

"What a union does is if they're elected in a workplace, they then enter into an agreement with the employer, a contract to govern the workplace," Selmi said. "It might have salaries, it might have protections in terms of termination and might provide for benefits."

Mancinas said while collective bargaining is a great tool for unions, it is not a necessity for advocating for their members' needs.

Rebekah Sanders is the chair of the Arizona Republic's employee union, The Arizona Republic Guild. Sanders said organizing outside of collective bargaining has helped the union "ramp up the pressure on (their) company," such as petitions, social media drives and getting attention from news outlets.

The X factor: employee engagement in the union

Leila Hudson, a union member and associate professor in the School of Middle Eastern and North African Studies at UA, said faculty governance has been useful in displaying employee solidarity. It is mandated by Arizona law that faculty "shall actively participate in the development of university policy" through "elected faculty representatives."

Alex Young, a lecturer at Barrett, University senator and union member, said even while representing ASU professors as a part of the Senate, he feels faculty need more decision-making power when it comes to University policy.

"ASU faculty, broadly speaking, I don't think (or) feel like we have a clear voice in the room in the decisions being made about instruction during coronavirus," Young said. "I know a lot of rank and file faculty like myself, feel like we're elevating things in places like the Senate and only getting those talking points back." 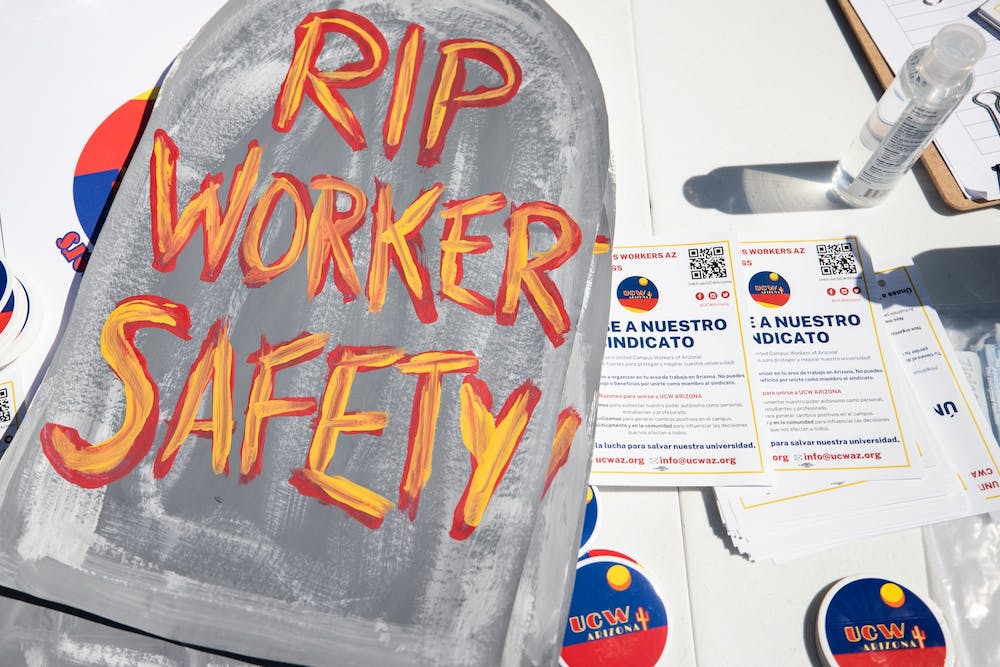 Compared to UA, Hudson said at ASU she observed the practice of this law as a "dead letter."

Joya Scott, a union member and lecturer for the School of Music, Dance and Theatre, said this may be because of the "individualist culture" at ASU. However, Scott said UCWA can do more to inform University employees about how to get involved in the union.

"I think that there's a lot of people that maybe haven't heard (of us) yet because we're so new and we're just building awareness," Scott said. "During COVID, because so many people were working remotely last year, I think people felt sort of distanced from campus."

UCWA has a bottom-up system of organizing, meaning the union's organization strategy is dictated by its members.

Mancinas said the process UCWA goes through to organize a campaign depends on which people have time to participate and what expertise they can contribute.

"That is where hopefully, we reach out to other members, partner organizations, and try to determine the full scope of a particular issue and then what kinds of paths are available to us to organize," Mancinas said.

Justine Hecht, a member of the union and graduate student in justice studies, said this system allows public employees to have more freedom in creating organizing strategies that fit the needs of union members.

A union's ability to mobilize change, Sanders said, relies on "investing in those relationships, planning together and having those conversations one on one with everyone who's affected."

Katie Zeiders, a union member and associate professor in family studies and human development at UA, said "the more we have discussions about it, the more people are feeling like they can be part of the solution and that we can work … to alleviate problems and challenges."

While it would be beneficial for the union to have more engagement with the university administrations when it comes to improving working conditions, Mancinas said the union has "chosen solidarity rather than devolving into cynicism or despair."