Sexual violence needs to be taken seriously, and universities have the responsibility to guarantee safe and equal educational environments

In a recent speech at the United Nations, Emma Watson raised the question, "What if, as is the case at far too many universities, (students) are given the message that sexual violence isn’t actually a form of violence?”

Watson’s question calls attention to a serious issue, and one that hits close to home. Sexual violence plagues many universities in the U.S., and increasing scrutiny demonstrates that the ways many universities handle these issues do little in the name of justice for the survivors of violence.

There are over 300 ongoing Department of Education Title IX investigations into how American higher education institutions address reports of sexual assault and harassment. ASU is one of the universities under investigation.

In short, all students have a right to education unimpeded by discrimination based on sex. Title IX established that right, and Title IX investigations, at least in theory, hold universities accountable to protecting that right.

ASU previously settled two lawsuits related to its response to sexual assaults on campus. In 2014, the university was named on a list of universities being investigated for Title IX violations by the Department of Education.

Jasmine Lester, the director and founder of the group Sun Devils Against Sexual Assault, filed a Title IX complaint in summer 2014 against ASU and Barrett, the Honors College. Her complaint was incorporated into the ongoing federal investigation.

Since filing her complaint, Lester hasn’t heard anything about the investigation.

“Other complainants at other schools have similar experiences of filing complaints and then not getting any resolution or anything until three, four years later,” she said.

In 2014, it took the Department of Education’s Office of Civil Rights an average of 1,469 days to complete a campus sexual assault investigation. This wait time leaves survivors in a state of limbo and may leave other students vulnerable to further abuse. We must ensure that there are adequate resources for the Department of Education to conduct investigations that are accurate and timely.

According to a written statement provided by a university spokesperson, since the initiation of the federal Title IX investigation, “ASU has significantly expanded and strengthened our prevention efforts through, among other steps: required consent education for students, training for students to act rather than be a bystander, mandatory training for staff and faculty, development of the Sun Devil Support Network of peer advocates among students, a total of over 2,500 hours of training for ASU police officers by End Violence Against Women International and designating two detectives to focus on such cases.” These steps are critical improvements.

In regards to what actions universities should take to truly address Title IX violations, Lester says that bystander intervention can only go so far, and that universities need to commit to zero tolerance policies regarding sexual violence.

“There needs to be a clear policy that everyone knows about, kind of like the plagiarism policy, where everybody knows that if you do this, you’re going to have some serious consequences,” she said.

It is absolutely tragic that a survivor of sexual violence could be re-victimized by a university’s mishandling of their complaint. Accordingly, it is of critical importance that universities are held accountable to their legal obligations under Title IX. Support for rigorous Title IX investigations and for students seeking to file complaints is necessary to ensure both safety and justice on college campuses.

Sexual violence needs to be treated as the serious and devastating phenomenon that it is. Violence perpetrated against students may devastate their ability to pursue their education. Educational programs and training for university students, staff and faculty on Title IX and sexual violence are positive and noteworthy steps.

At the same time, zero tolerance for sexual violence and the mishandling of sexual violence complaints is crucial in order to prevent the reoccurrence of injustices and to support survivors. When possible, universities should reach out to survivors to see if they are willing to suggest policy improvements.

Universities have no option but to ensure a safe and equal space for learning. 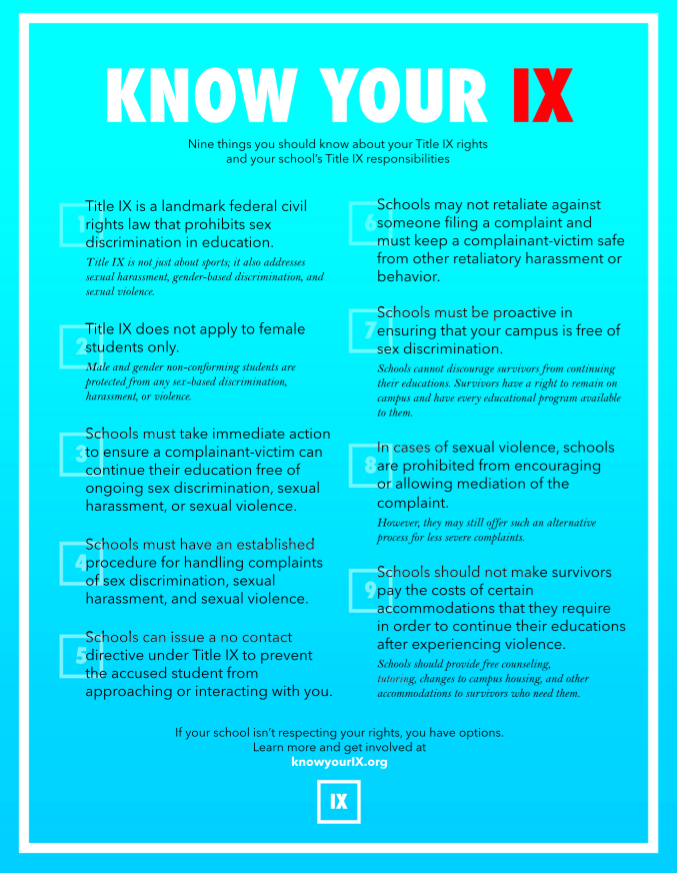