Anti-Trump sentiments have grown increasingly as the President-elect Donald Trump begins his transition into the White House.

An estimated 8,000 protestors in Los Angeles shut down inner-city streets; Oregon protests turned violent and were declared a riot; and, dozens of Phoenix protests ranging from gatherings to marches have met every night since the election.Trump responded to the protests with two different and dissonant tweets.

In the first tweet, Trump cast blame on the media for inciting the riots.

Just had a very open and successful presidential election. Now professional protesters, incited by the media, are protesting. Very unfair!

One day later, he seemingly embraced the protesters' collective passion, returning to the reconciliatory tone he had in his acceptance speech, given the morning of Nov. 9.

Love the fact that the small groups of protesters last night have passion for our great country. We will all come together and be proud!

In Tempe, organizers marched from Old Main to Mill Ave. just one night after the election and have done so almost every night since.

Read more: 'Not My President;' anti-Trump protestors march on Mill

On Friday, protestors marched in and out of downtown Tempe streets, at one point taking over University Bridge before police asked them to step down.

Individuals, as well as anti-Dakota Access Pipeline groups, Project Venus and Puente Arizona represented their causes in many of the marches. 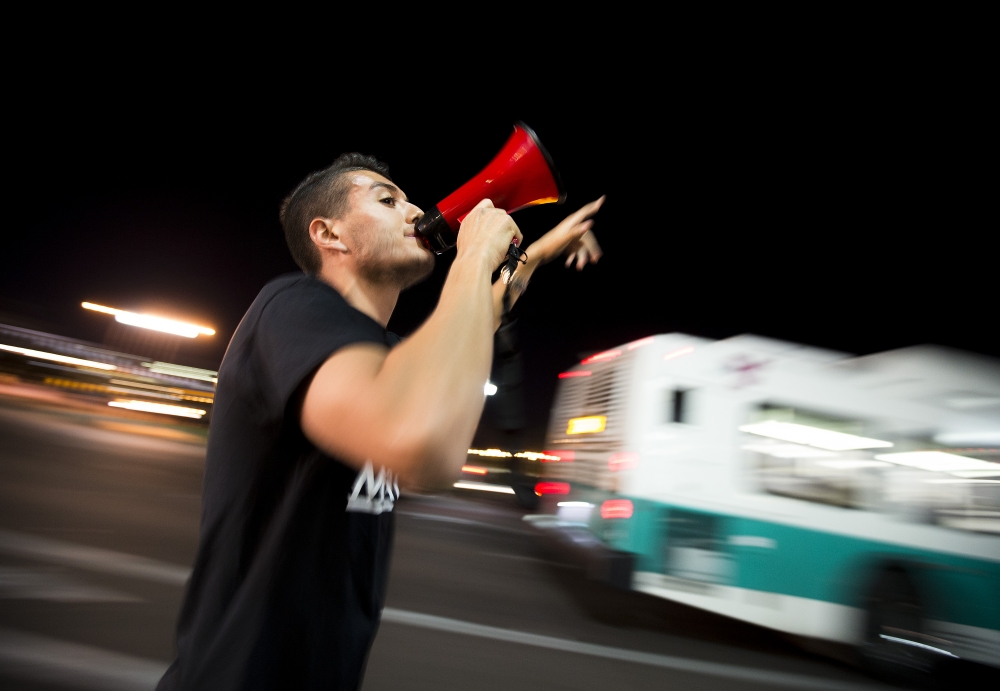 The police presence was large but not confrontational, with officers mostly directing traffic.

At the end of Friday's protest, students and community members gathered at Old Main to speak in an open-mic format.

Other events with similar formats have happened all across the Valley, including Saturday in downtown Phoenix when at least four separate protests merged at the State Capitol.

The capitol has been a repeat destination for Phoenix high school students from Carl Hayden High School, Central High School and more, who have staged protests at the same location throughout the week.

One presence at many of the gatherings was the provocateur preacher known as Brother Dean, who condemned protestors as "sore losers" of the election among other intended insults.

Community activist and ASU student Randy Perez stood between protesters and Brother Dean, urging them to ignore as Brother Dean chanted at the crowd of about 500.

“He’s not here,” Perez told one man, who angrily yelled in Dean's face.

Perez said people need to be aware of the policy changes Trump could implement — especially regarding health care.

"Twenty million people could lose their health insurance, women could be charged more for pre-existing conditions, and we could lose insurance if we are on our parents' plans," Perez said.

From organizers, community members and students who make up the large and diverse crowds at the protests and gatherings, the mood was a mix of fear of the unknown and optimism regarding the amount of people turning out to march.

Signs and chants also called for the abolishment of the electoral college, the system by which the president is elected.

Phoenix resident and Jill Stein supporter Zach Williams said he was there to march against the election of Trump, but did not support Clinton either.

“I’m coming out here to protest political corruption and the way that this country is going,” Williams said. “I am wondering when the real revolution will stand up.”

He also said he was against the enslavement of students by loans in the current collegiate loan system.

One of the Old Main protest organizers, Daniel Restrepo, said that moving forward — more people need to turn out before it's too late.

“Our biggest points were to get people engaged,” Restrepo said. “We lost the vote because Millennials didn’t show up.”

Members also hoped that elected officials would see the events as a warning.

“If the representatives are seeing this, they will know that when legislation comes down from Trump, they are going to have to face us,” Restrepo said. “They will face some sort of retaliation.”