The Sun Devils dominated the Vikings thanks to excellent backcourt play

While the season is undoubtedly young, it appears the ASU men's basketball backcourt will shoulder much of the scoring load this season.

Senior guard Torian Graham and junior guards Tra Holder and Shannon Evans II combined for 65 of their team's 88 points as the Sun Devils (1-0) rolled to an 88-70 victory over Portland State on Friday at Wells Fargo Arena.

Graham was the catalyst for ASU after the Vikings (0-1) got out to an 8-2 lead early. Whatever nerves may have had a factor in the Sun Devils' sluggish start quickly evaporated as Graham's hot shooting snapped them out of it. He finished with 23 points on 9-of-11 shooting.

"Torian was terrific today shooting the ball and gave us a real spark in the first half," ASU head coach Bobby Hurley said. "That's who he's been for a while."

There were visible jitters for both teams in their season opener, but the cool and collected play of Graham, Holder and Evans allowed ASU to pull away as the first half progressed. The Sun Devils headed into the halftime break leading 44-30 with Portland State struggling to hit open shots.

Hurley acknowledged the areas in which the Sun Devils can improve on the defensive side, and said they're a dangerous team if they defend.

"We have to be very active," Hurley said. "We've got to be relentless with how we move to compensate for not having an ideal size on the frontcourt at times with certain lineups.

"If we commit to doing that, then we can create some chaos out there."

Graham and company created a bit of chaos on both ends at the beginning of the second half, going back and forth with the Vikings before eventually cementing a 15+ point advantage. A less-than-stellar defensive performance by ASU was bailed out by a less-than-talented Portland State squad that made a number of miscues. 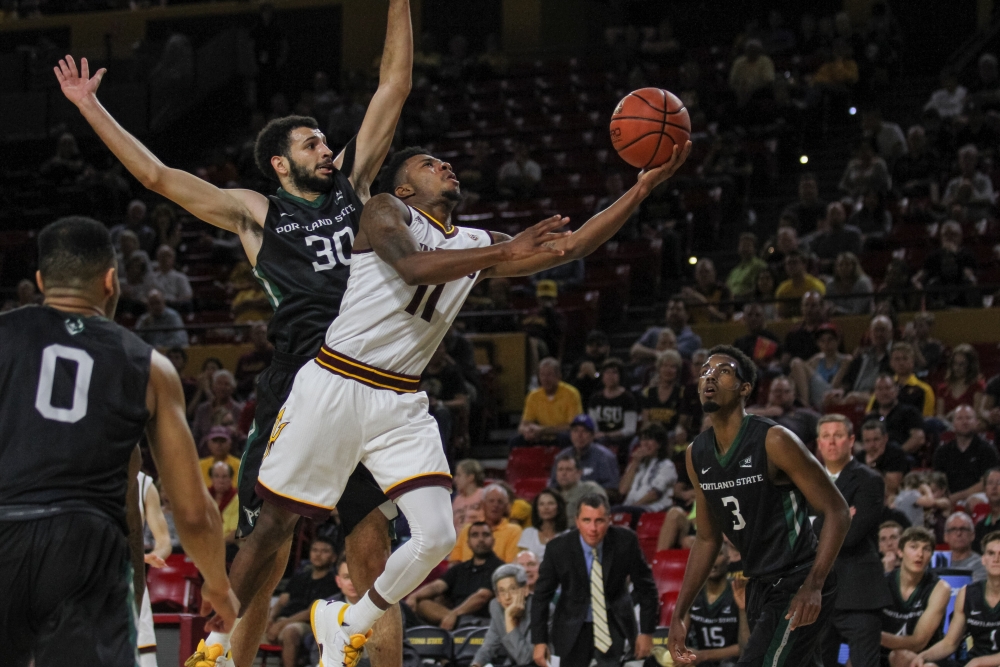 Then it got fun for the Sun Devils after a few highlight plays that brought the fans to their feet — including a fastbreak dunk by Graham, an emphatic block by freshman forward Jethro Tshisumpa where he stared down his opponent, and a three-pointer by Evans where he ran down the court strumming an air guitar.

Evans said the air guitar started with senior forward Obinna Oleka, and that plays like Tshisumpa's swaggering block happen all the time in practice.

"Jethro, when he first got here, was kind of a headache," Evans said with a laugh. "It's crazy the improvement he's made already — the sky's the limit for that kid.

ASU appeared comfortable and focused down the stretch while the Vikings continued to struggle. Portland State finished shooting 39 percent from the field while the Sun Devils shot 49 percent and held a 47-33 advantage on the boards.

The Vikings were led by junior forward Braxton Tucker with 19 points and six rebounds, but a 6-of-27 clip from three-point range was their undoing. Nobody in green and white could hit an outside shot — even when they were wide open.

Portland State's defense wasn't up to par, either, freeing the Sun Devil guards to attack the basket at will. Holder was among those consistently knifing through the lane to finish layups, and he said ASU had some stretches where it played really well on opening night.

"It's gonna get better as the season (progresses)," Holder said. "We're gonna start off stronger next game and improve as a team."

The Sun Devils' next game is against Cal Poly on Sunday at 7 p.m. in Tempe.