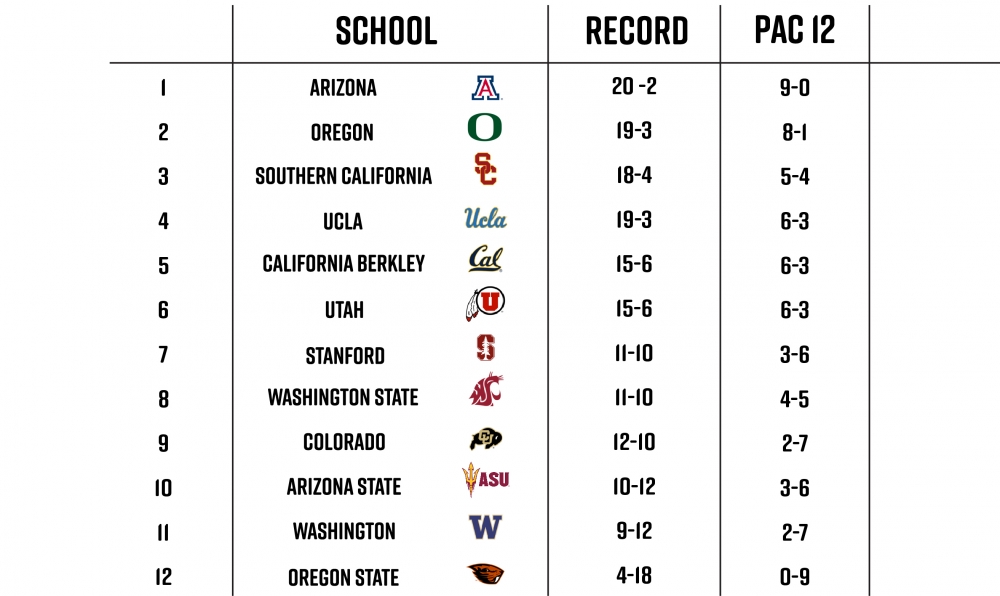 The Wildcats struggled early against Washington but pulled away at the end to extend their win streak to 14 games in a row. Allonzo Trier has returned as a reliable scoring option averaging 14.5 points per outing in his three games back with the team.

The Ducks had their 17-game win streak come to an end but are still for real in the Pac-12. A loss to Colorado takes some of the shine off Oregon's hot start, but a home matchup with Arizona this weekend could restore the Ducks.

The Trojans knocked off their crosstown rival UCLA this week, totally shaking off the stink that a rocky start to conference play provided. USC is on the outside looking in for a bye in the Pac-12 Tournament, but can make up ground quickly without a ranked team on its schedule for a few games.

The Bruins have dropped two games in a row and have fallen into a tie for third place in the conference despite sitting at No. 11 in the AP Poll. Despite boasting the most potent offense in the country, the Bruins have lost because of their porous defense, which ranks 125th in the nation according to KenPom.

The Golden Bears beat cross-bay rival Stanford to keep a top-four seed in the conference. Sophomore forward Ivan Rabb is one of four Pac-12 players to average a double-double, making his decision to return to school look brilliant.

The Utes lost their fifth game to a ranked team this season, continuing their trend of only losing games they're expected to lose. Junior forward Kyle Kuzma has stepped in admirably in the middle, carrying Utah closer to a bye in the Pac-12 Tournament and a possible NCAA Tournament bid.

The Cardinal have lost back-to-back games, both on the road, to slip in the standings. Stanford remains nameless and faceless in the Pac-12, but good enough to maintain a middle ground in the standings.

The Cougars bounced back from a loss in Tucson with a big win over ASU at Wells Fargo Arena, its first since Klay Thompson was a freshman. Senior forward Josh Hawkinson scored a career-high 31 points Sunday, leading his team back over .500.

The Buffaloes roared back with a vengeance with back-to-back wins at home, including one against a top-10 team in Oregon. Colorado has been competitive in most of its games and finally broke through. It remains to be seen if Colorado can match its hot start, but last weekend was a good indicator that it could happen.

The Sun Devils have lost another player as junior guard Maurice O'Field has left the program and will transfer upon graduation. That's the second player off the roster this season, leaving ASU with just seven rotation players to make due with for the final stretch.

Freshman phenom Markelle Fultz continues to impress, but the rest of the Huskies look listless. Fultz scored 18 points in the final 5:10 in a loss to ASU Wednesday, doing all he could, but without help, he's just a lost pup in the pound.

The Beavers lost by scores of 85-78 and 86-78 in Boulder and Salt Lake City respectively. Halfway through conference play, it has become more of an if and not a when in regards to Oregon State picking up a conference win, which no one has done since the Beavers in 2007-08.